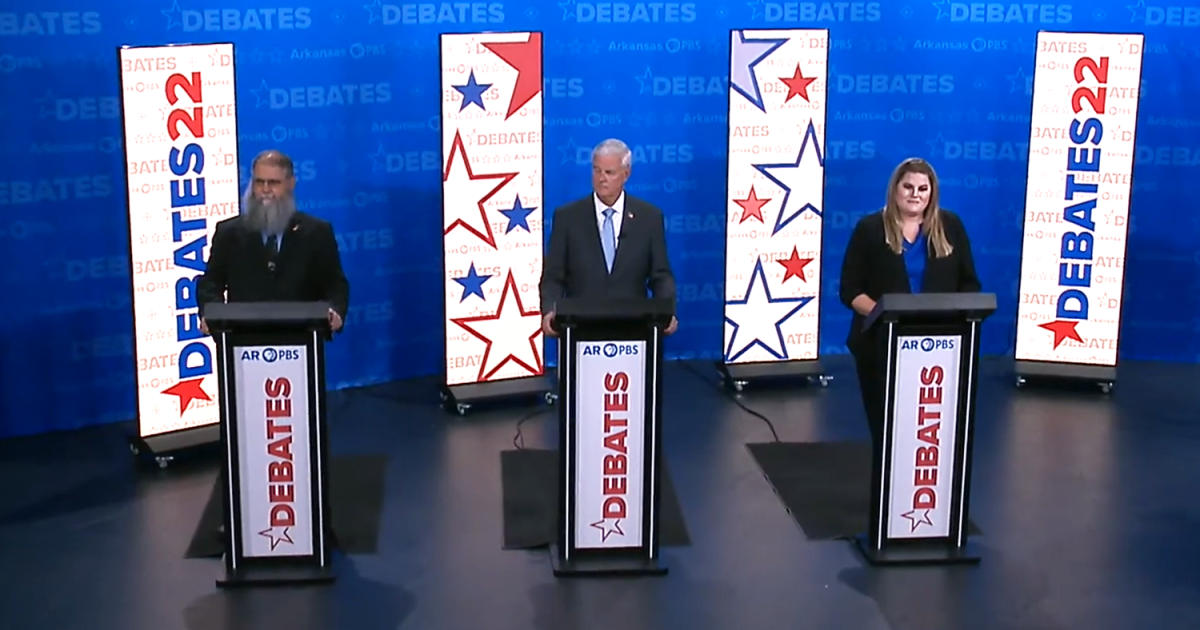 Issues ranging from abortion to sanitation systems were part of a Monday 3rd congressional district debate in which U.S. Representative Steve Womack, R-Rogers, said he would support a nationwide ban on abortion if it included “certain exemptions”.

Womack, the incumbent in the race who is seeking his seventh term in the U.S. House of Representatives, took on Libertarian Michael Kalagias and Democrat Lauren Mallett-Hays in Monday’s debate televised by Arkansas PBS and moderated by Steve Barnes.

The first question to the candidates concerned infrastructure spending in the 3rd arrondissement. Womack, noting that about 30 people a day move into northwest Arkansas, said areas in the district have passed taxes and taken other steps to meet those needs, but “a federal partner will be needed” for big projects like a bridge across the Arkansas River in the Fort Smith metro to help complete Interstate 49 in the state.

Mallett-Hays came up with a big idea for transportation infrastructure.

“One key thing we’re missing is public transit in the form of a commuter train. I think connecting the Northwest Arkansas Corridor to Fort Smith and then to Little Rock will be a significant improvement for our region in terms of the rapid growth we’re going to see,” she said.

Kalagias said taxes are already in place to meet infrastructure demand, and housing supply is largely a problem of too much government regulation on developers and builders. He also said there was no demand for public transport and any money spent on it was a waste.

According to Womack, a “hidden” problem that could be a “real growth inhibitor” is wastewater management and how it is regulated by the US Environmental Protection Agency.

“We also need to spend some time talking about it, because it might force us to stop growing altogether,” he said.

On the economy, Mallett-Hays said if elected, she would push for an “OT40” bill to eliminate overtime taxes and some commissions. She also said legislation was needed to reduce corporate taxes. Kalagias said the best way to improve the economy is to provide tax breaks. He said 50% of his household income goes towards paying taxes and fees.

“It’s overwhelming how much money you have to give up on what you earn,” Kalagais said. “We have to reduce this tax burden, not just in income taxes, but in all areas, in all taxes.”

He said lowering taxes should be accompanied by cuts in public spending.

Womack focused on inflation, noting that congressional spending is what has pushed inflation to record highs. He said another driver of inflation is the cost of energy and the volatility of global politics, and the United States must do more to promote energy independence. Kalagias responded by saying that Republicans and Democrats have overseen the spending increase and that Congress needs representatives who will recognize the problem and do something about it. Mallet-Hays said the global pandemic, supply chain disruptions and rising corporate profits are also drivers of inflation.

When it comes to government spending and entitlement support programs like Social Security, Kalagais and Mallett-Hays agreed that sending Womack and other incumbents back to Washington isn’t working. Mallett-Hays said voters shouldn’t keep sending the same people to Congress to fix the system who have done nothing to fix it. Kalagias called the existing social security system a “Ponzi scheme,” and it should be replaced with a defined contribution scheme to protect the money contributed by each individual.

On the controversial issue of abortion, Mallet-Hays was the only candidate with a pro-choice stance.

On June 24, the United States Supreme Court upheld a Mississippi law banning abortion and, in doing so, struck down the right to abortion in Roe v. Wade, and also overruled Planned Parenthood v. Casey, which also provides national access to abortion. The decision (Dobbs v. Jackson Women’s Health Organization) is the first time it has reversed a decision granting a constitutional right in the Court’s history. At least 13 US states, including Arkansas, had trigger laws that make abortion illegal if the court overturns Roe. The decision does not ban abortion but did push legislation on the issue to states.

Mallett-Hays said state governments and the federal government were wrong to tell half the American population that they weren’t capable of making informed decisions on their own. She said abortion is a medical procedure that is sometimes justified and should be a decision between a woman and her healthcare providers.

Kalagias said he believed in life at the moment of conception and that abortion neglects the right of a “unique” person. Womack said the Dobbs ruling left the decision up to the states, but he could support a national ban.

“I believe on issues like this that are so close and so emotional, and so emotionally charged, that the best place for these issues to be decided is closest to the people. This is how our Constitution was formed. But that said, I support a federal ban on abortions with certain exceptions. I was very clear about that,” Womack said.

Here are notes on other issues discussed.

Womack stressed that he was not a “climate change denier”, but said the United States should produce more fossil fuels because it can do so in a cleaner and more environmentally friendly way than other countries. ‘other countries. He also defended nuclear energy. “I think we need more of this kind of energy to reduce the carbon footprint and create a sustainable grid.” Mallett-Hays pushed for a broad policy that includes fossil fuels but creates a transition away from fossil fuels. Kalagais said more Americans should “take action locally” to reduce carbon emissions and suggested using trash instead of coal to generate electricity.

Kalagias said the United States was $31 trillion in debt and didn’t have the money to help Ukraine, adding that “at some point Europe will have to solve its own problems.” Womack and Mallett-Hays agreed that it was necessary to support Ukraine. “We can’t afford Eastern Europe to be invaded by an out-of-control Vladimir Putin,” Womack said.