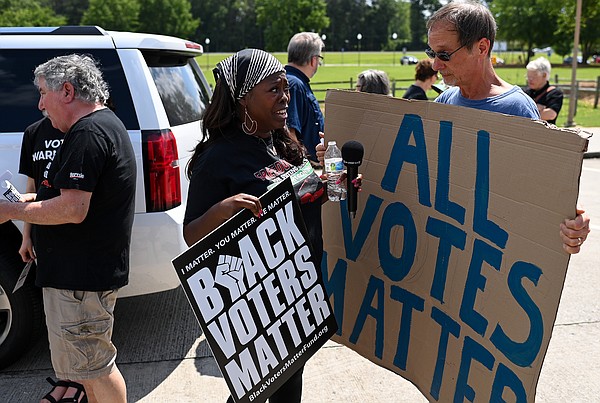 Activists continue to demand the right to vote

LaTosha Brown and Cliff Albright, co-founders of Black Voters Matter who have led protests in Washington and across the country, are determined to keep the issue of voting rights in the conversation. In fact, they argue, people’s right to vote for the candidates and issues of their choice is inextricably linked to the most pressing issues in the country today.

“The right to vote is not a separate issue; it ties into all these other things: whether we decide to go to war, the economy, the Supreme Court,” Brown said in a recent interview. “The bottom line is that voting is the foundation of every one of these issues. What we’re talking about right now is a democracy — that’s the fight we’re talking about.”

This weekend marks the 57th anniversary of ‘Bloody Sunday’, when activists marching for suffrage were brutally beaten by Alabama state troopers as they attempted to cross the Edmund Pettus Bridge in Selma, Alabama en route to the state capitol in Montgomery. Footage of the March 7, 1965 carnage is credited with spurring President Lyndon B. Johnson to push Congress to pass the Voting Rights Act of 1965.

Over the past decade, states with Republican legislatures and governors have passed laws that activists and some experts say disproportionately restrict voting access for people of color, youth, and people low income.

Activists across the country lobbied the Senate to pass the John Lewis Voting Rights Act, which would strengthen the original 1965 law, and the Free Voting Act, which would set federal standards on the conduct of the elections and would also address fundraising practices. . Republicans repeatedly blocked the bills, and Democrats were unable to persuade two senators to make an exception to the filibuster and allow the legislation to pass by a simple majority.

On Sunday, Vice President Kamala Harris spoke at the event marking the anniversary of Bloody Sunday and took part in the march on the bridge with activists and other political leaders, including some Cabinet members and members of Congress.

Albright and Brown will spend the coming week with other activists completing the march to Montgomery, hosting several events along the route to raise awareness of suffrage.

Alabama continues to be in the midst of the fight for voting rights. The Supreme Court decision that removed Justice Department oversight of election laws in states with a history of voter discrimination was the result of a case filed in Shelby County, Ala. And in February, the Supreme Court overturned a lower court order that Alabama lawmakers create a black candidate-friendly second congressional district to comply with the Voting Rights Act. Only one of Alabama’s seven congressional districts is majority black, even though African Americans make up nearly 27% of the state’s population. Democratic Rep. Terri Sewell represents the 7th District and is the only Democrat in the state’s congressional delegation.

“You can’t have a popular agenda until you have a Congress and a government that doesn’t accurately reflect the people. And that’s the situation we find ourselves in now,” Albright said. He said activists are sometimes dismissed as being too dramatic when they say voting is “a matter of life and death”.

“Who makes these decisions, which are literally life and death decisions, is a question of our voting rights and our voting power and to what extent people in government, whether at the executive or legislative level, reflect really the locals. “Albright said.

That’s why Brown said it’s important for people to think about suffrage beyond just the process of voting in an election.