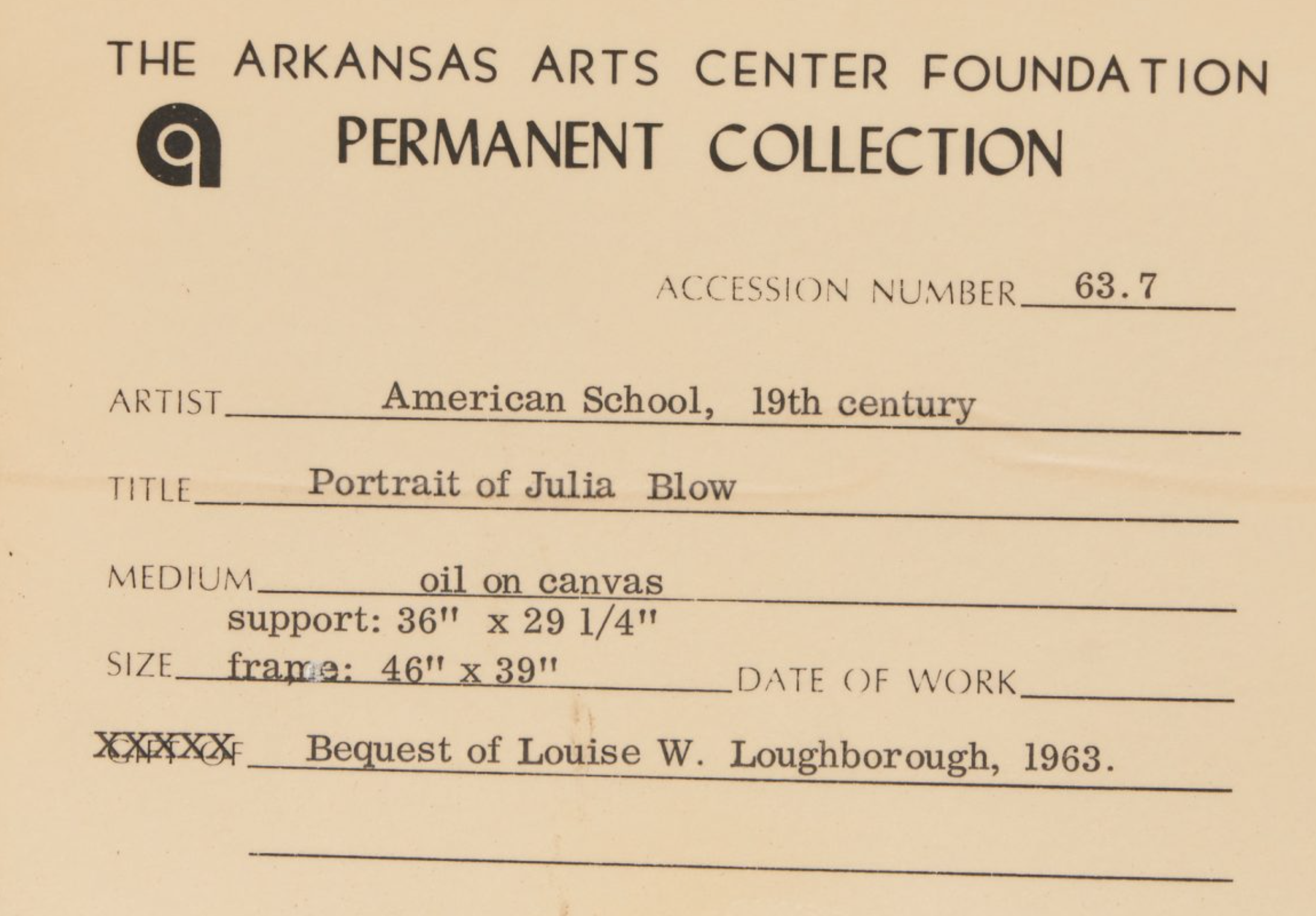 UPON AUCTION: This portrait from the collection of the Art Museum of Arkansas.

It’s not Standing Red, the sculpture thrown in the trash by the Arkansas Art Museum, but another piece from the collection of what was once known as the Arkansas Center for the Arts. was auctioned off.

Case Antiques in Knoxville, Tennessee (which I believe may have sold furniture that once adorned the now defunct Museum of Decorative Arts in the Terry Mansion) will auction a 19th-century oil portrait of Julia Blow in July . It is valued between $350 and $450 and proceeds would go to the museum’s acquisition fund.

As I mentioned in my previous article on Standing Red, the museum’s collection is controlled by a private foundation which, as a matter of principle, will not talk about the collection and the objects chosen to be “disposed of”. There is a lot of. This is not unusual in the world of museums.

There is a small significance to this object, however, which might have prompted finding a way to get the painting into local hands, especially given its modest value. It came from the estate of Louise Loughboro, who died in 1962. 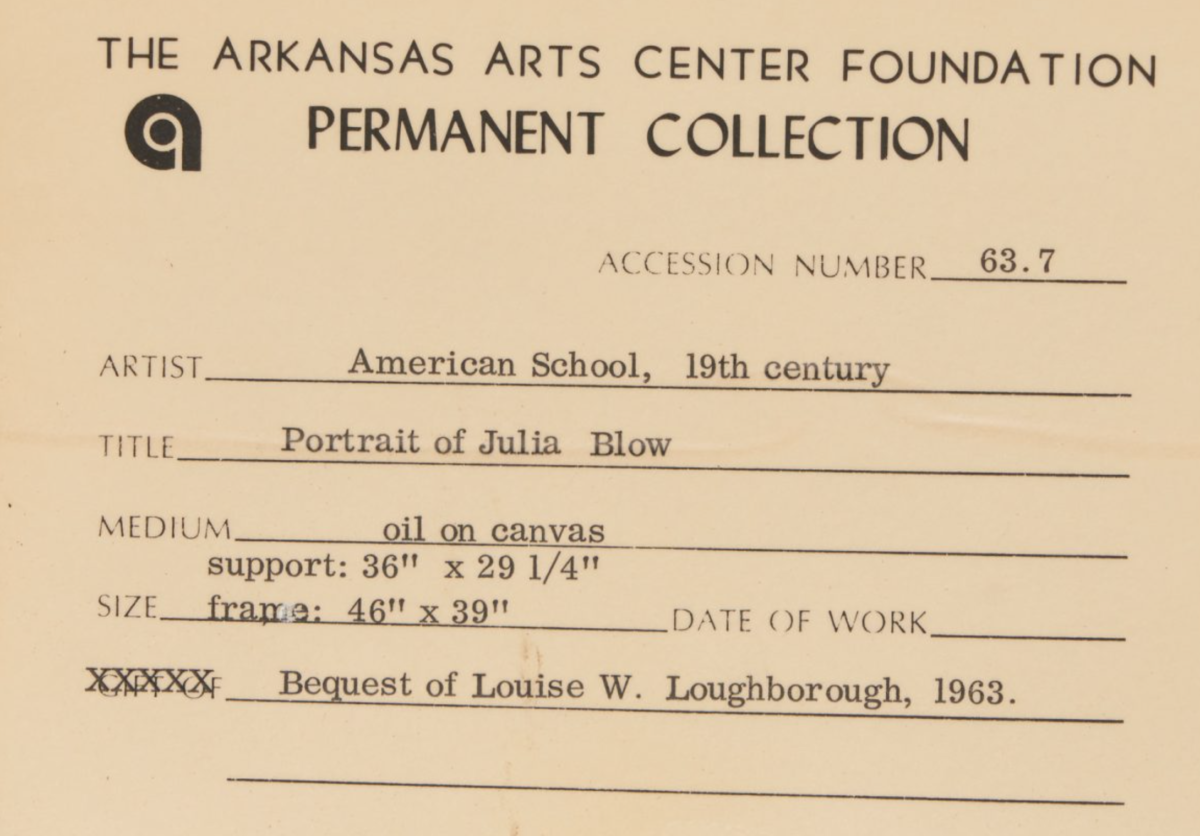 The Arkansas Encyclopedia can help you.

Louisa Watkins Wright Loughborough was a pioneer in the field of historic preservation in Arkansas. Inspired by her involvement with the Mount Vernon Ladies Association of the Union, she worked to beautify the Old State House and related grounds in Little Rock, Pulaski County, and later founded the Arkansas Territorial Restoration (now the Historic Arkansas Museum), the first state-supported history museum in Arkansas.

She was instrumental in preserving the historic structures that are at the heart of the Arkansas Historical Museum and led territorial restoration, as it was formerly known, for nearly 20 years after its founding in 1941. This representation of her is of HAM, which presumably hasn’t insane. Perhaps the Museum of Fine Arts could have sent the Blow painting to HAM, rather than Tennessee. At least it wasn’t sent to a junkyard. 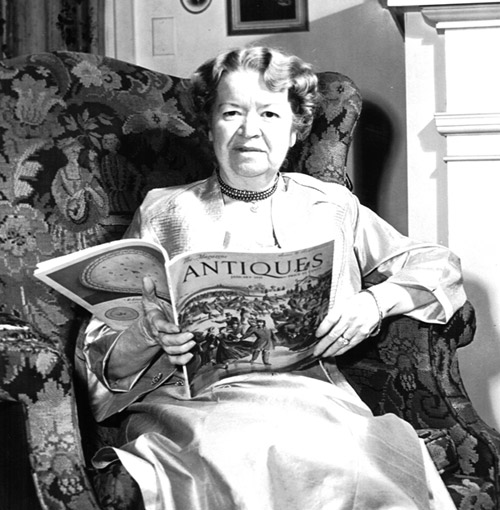 UPDATE: I was reminded of an article written by Leon Kaplan, a former Assistant to the Director of the Center for the Arts, about the disposal guidelines most museums follow. There is a procedure that most museums follow and most may have been followed in this particular decision. But not this one:

Although the museum (in this case, the Museum Foundation) holds clear title to the work and is not required by law to contact the donor of intent to dispose, many museums do contact donors or relatives out of courtesy.

To avoid controversy, many museums may also speak with local community advisory groups, such as museum members, local collectors, other local museums, and volunteers about disposal to inform and get the community’s perspective on the work and its value to the collection. This obviously didn’t happen when it came to “Standing Red”. As a result, there is an unfortunate appearance of sketchy behavior on the part of the management of the Museum of Fine Arts.

It is up to said management to be more transparent, to explain itself and to do better. It is imperative that the museum take steps to regain its credibility and public trust.