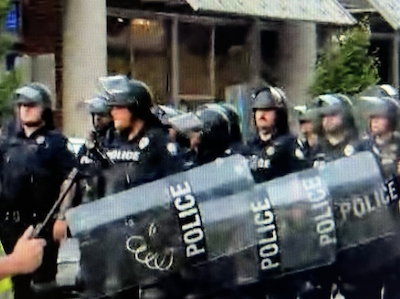 HAPPENS NOW: Hundreds of people gathered on the steps of the capital to march through the streets of Little Rock to protest the Supreme Court’s decision regarding Roe V. Wade. @KARK4News @FOX16News #ARnews pic.twitter.com/F29glyrELH

A good crowd gathered at the Capitol on Monday to protest the blatant decision of the United States Supreme Court which strips women of their medical autonomy.

The crowd made their way to the River Market, ahead of the 4th of July concert and fireworks, and were greeted by a police show. It’s unclear if the peaceful protest march prompted the police phalanx or if it was just a reaction to a large crowd the day a gunman opened fire at a July 4 parade in Illinois. . Either way, one arrest for disorderly conduct was reported.

UPDATE: Indeed, the LRPD mobilized armed force because of the protest. Says a statement:

As the evening progressed, protesters made their way to downtown River
Market area. Due to the size of the crowd, the Little Rock Police Department activated the Special Response Unit (SRU) in order to maintain the peace and protect citizens, as well as protesters. Although the SRUs were activated, they were not used. However, at least one person has been arrested and charged with disorderly conduct.

And this morning I received a copy of the report of the disorderly conduct arrest of 34-year-old William Stockton of West Monroe, La. The narrative of the incident report:

The Arkansas Democrat-Gazette’s coverage of the day’s event included what became a rote, but imprecise, recitation of Arkansas abortion law.

Arkansas law prohibits abortions except in cases where the mother’s life is in danger.

What the law actually says:

No one should deliberately perform or attempt to perform an abortion except to save the life of a pregnant woman in a medical emergency.

“Medical emergency” means a condition in which an abortion is necessary to preserve the life of a pregnant woman whose life is endangered by a physical disorder, physical illness or physical injury, including a life-threatening physical condition in danger caused by or resulting from the pregnancy itself;

The Arkansas legislature outrageously allowed no consideration for the mother’s health or mere “risk” to her life. Only life-saving treatments are permitted, sometimes putting the interest of a fatally deformed fetus ahead of the interest of a living adult. Not to mention a medical condition that, although survivable, could leave lasting damage to the woman.

The question of whether a life is “in danger” or whether an abortion is necessary to “save life” is already causing problems for doctors in the country, with delays in necessary medical procedures as doctors and lawyers discuss the safety of a doctor. proceed with medical treatment without risk of arrest.

Even the treatment of ectopic pregnancies worries doctors. Arkansas law says, without elaboration, that it is not an abortion to “remove an ectopic pregnancy.” Ready to prove it, doc?

The calculated disenfranchisement in laws such as Arkansas’s has already prompted cancer experts to tell pregnant women they cannot continue chemotherapy because it could cause an abortion. And they interfered with prescriptions for drugs that treat arthritis because of the potential to cause miscarriages.

There is no one-size-fits-all solution to this other than a change in personnel on the United States Supreme Court or an outright dismissal of legislatures as evildoers in power in Arkansas. Neither is likely in the foreseeable future.

Good comment on the “monstrous cruelty” of the medical issue in laws prohibiting abortion and the lack of exceptions for rape victims and minors from Jennifer Rubin of the Washington Post:

When you treat women as less than competent adults and insist that others, who may have little or no skills, weigh the risks to her health and life, you end up with not a culture of life but a culture of devaluing women’s lives. https://t.co/JbEzaFJ0EQ

Many states no longer consider exceptions for women’s health or create dangerous uncertainty. In the real medical world, where doctors and patients make decisions based on probability, the outcome of such abortion laws can be deadly for women.https://t.co/JbEzaFJ0EQ

The monstrous cruelty of such bills shows how little many conservatives care about the welfare of women and girls who have already suffered the incredible trauma of sexual violence.https://t.co/JbEzaFJ0EQ