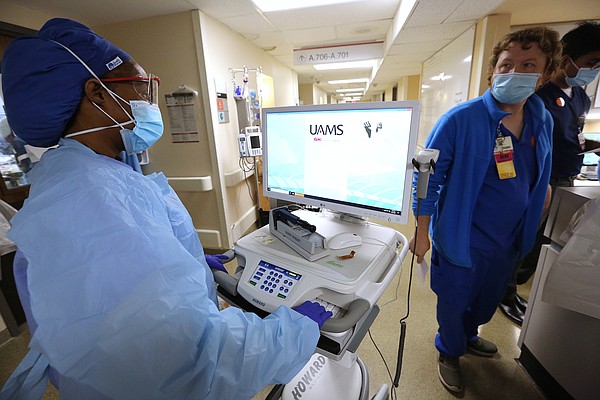 Breaking a trend of low and steady numbers of new coronavirus cases over the past few weeks, Arkansas’ case count rose by 192 on Wednesday — the biggest daily increase in nearly a month.

It was the biggest single-day increase since March 24 — a time when the state’s new case count was swollen by a backlog of reports faxed from providers weeks earlier during a surge. infections with the omicron variant.

“It appears we are at the very beginning of an increase in cases similar to those faced by other parts of the country, particularly in the Northeast” in a region that includes New York and New Jersey, said state epidemiologist Mike Cima. Wednesday.

He said a possible culprit is a strain of the omicron BA.2 subvariant that is believed to be even more transmissible than the original BA.2 strain.

According to estimates from the US Centers for Disease Control and Prevention, the sublineage known as BA.2.12.1 accounted for 52.3% of cases last week in US Department of Health Region 2 and of Social Services, made up of New York, New Jersey, Puerto Rico and the Virgin Islands, up from 36.5% a week earlier.

Nationally, the estimated percentage of cases caused by the strain rose from 11.4% in the week ending April 9 to 19% last week.

While BA.2.12.1 has yet to be found in Arkansas, only a small portion of test samples in Arkansas and elsewhere are sequenced to determine which variant caused infection.

“Just because we haven’t detected it doesn’t mean it’s not there,” Cima said.

Among the 10 Department of Health and Human Services regions, the percentage of cases caused by BA.2.12.1 was lowest last week in Region 6, which includes Arkansas as well as Louisiana, Texas, Oklahoma and New Mexico.

“It’s a bit too early to tell, I think,” Cima said, adding, however, that it “would be consistent with what we’ve seen in the past after the holidays.”

He said the rise in cases in other parts of the country, possibly as a result of BA.2.12.1, has been more gradual than previous waves, such as those caused by the original omicron strain. and by the delta variant. Last year.

Nationwide hospitalizations have only increased slightly so far, he said.

“As cases increase, it’s reasonable to think that hospitalizations can fluctuate quite a bit,” Cima said.

“I really don’t think they’re going to explode [in Arkansas]just based on what we see elsewhere.”

As for what precautions the Arkansans should take, he said they should consider information from the Department of Health and the CDC and “make an informed decision based on all of the information.”

“There is a lot of information out there that would help individuals make decisions about how to avoid risk at their level,” Cima said.

“I think if the cases continue to increase, people will react accordingly.”

Greene County, which had no new cases on Monday or Tuesday, had 46 on Wednesday, accounting for nearly 24% of the statewide increase.

The number of cases in Arkansas’ northeast county that were considered active, representing people who have tested positive and are potentially still infectious, rose from just seven on Tuesday to 52.

Cima said health department officials were unable to immediately determine the reason for the county’s spike.

After falling to a two-year low a day earlier, the number of people hospitalized in Arkansas with covid-19 rose by five on Wednesday, to 51.

Growing for the second day in a row, the number of patients infected with the state’s virus who were on ventilators rose by two, to 15.

The number in intensive care, also up for the second consecutive day, rose by four, to 25.

The state’s death toll from the virus, as tracked by the Department of Health, rose by six, to 11,360.

Department of Health spokeswoman Danyelle McNeill said all of the deaths reported on Wednesday occurred within the past month.

The state’s average daily increase in the number of cases over a rolling seven-day period rose Wednesday to 86, its highest level since the week ending April 1.

With new cases exceeding recoveries and deaths, the number of cases in the state considered active rose by 101, to 1,096, the highest total since April 3.

At its hospitals in Little Rock and Springdale, Arkansas Children’s had two patients with Covid-19 on Wednesday, the same number as the previous two days, spokeswoman Hilary DeMillo said.

The tally of doses of vaccines administered by the Ministry of Health rose by 2,491, the fifth consecutive daily increase lower than the previous week.

More than half of the most recent increase came from doses classified on the Department of Health dashboard as having no “dose number available”.

This is how the department lists the second booster doses, which were authorized at the end of last month for people aged 50 or over or with weakened immune systems.

The number of doses for people receiving the vaccine for the first time increased by 441, less than half the increase in the first doses a week earlier.

The average number of total doses given each day over a continuous seven-day period fell to 2,223, from more than 2,600 per day the previous week.

The average of the first doses fell to 322.

The percentage of fully immunized people who received a booster dose remained at 39.3%.

Among the states and the District of Columbia, Arkansas continued to rank 37th in the percentage of its residents who received at least one dose and 46th, ahead of Idaho, Louisiana, Mississippi, Wyoming and Alabama, for percentage fully vaccinated.

Nationally, 77.4% of people had received at least one dose and 66% were fully immunized.

Of the nationally fully vaccinated population, 45.5% had received a booster dose.

Stacker: Arkansas is the 9th state with the most people living near toxic discharge…

Stacker: Arkansas is the 9th state with the most people living near toxic substance…