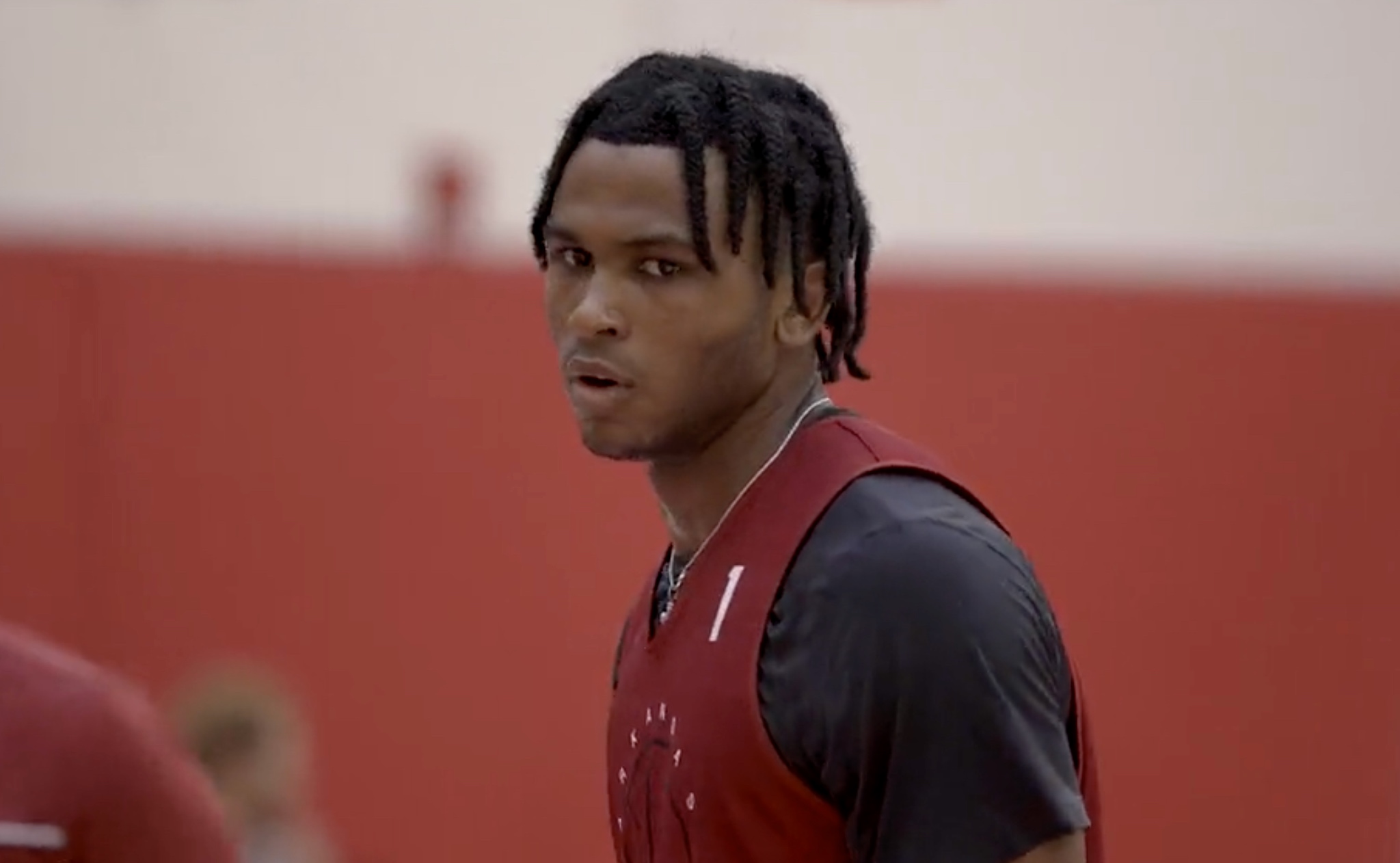 FAYETTEVILLE – The SEC has been officially warned: stand between Ricky Council IV and the basket at your own risk this season.

One of five portal additions from Arkansas this season, the transfer from Wichita State brings elite athleticism to Fayetteville and the media glimpsed the moment head coach Eric Musselman graciously opened up a 45-minute portion of Wednesday’s practice.

During a 5-on-5 scrimmage segment, Council caught a pass in the corner, drove the baseline and took off, launching a thunderous dunk. The piece actually bent the edge – much to the dismay of a graduate assistant, who had to put it back in place by throwing a basketball at it.

Even on a roster loaded with athleticism, the 6-foot-6 guard from Durham, North Carolina stands out and has caught the eye of his teammates.

“Ricky is amazing,” said rookie Nick Smith Jr. “Ricky is crazy. I’ve never seen anything like this before. literally under the basket, without even trying. That’s how crazy his athleticism is. I thought I was athletic until I saw Ricky. …Whoever jumps with Ricky this year, it’s probably going to be a problem.

“(You) will be baptized,” Anthony Black added, while Trevon Brazile provided a public service announcement: “Don’t jump with Ricky Council.”

That dunk may have been the highlight, but it wasn’t Best of Arkansas Sports’ only takeaway from the practice period…

Much of the excitement surrounding this Arkansas basketball team has centered around the 11 newcomers and that’s understandable given that they brought in the No. 2 signing class and the one of the best transfers in the country.

However, the Razorbacks are returning two scholarship players from last year’s team in guard Davonte Davis and forward Kamani Johnson. Now a junior in his third season with the program, Davis knows Musselman and his expectations better than anyone, making him the so-called “on-court coach.”

It’s still early days and the team has yet to face anyone other than themselves, but that leadership is already paying off.

“We were doing a defensive drill and Devo was kind of dragging everyone aside,” Musselman said. “It was just a shell defense. I kind of stopped everything and said, “Do you understand why Devo is on the sidelines barking instructions?”

“Everyone had their own thoughts and reasons. I said, ‘No, it’s because he knows what it’s like to get to an Elite Eight. That’s why he’s doing this. And he knows that it’s a necessary piece of being a successful team. Some of you other guys don’t know that, who haven’t won at a high level.

A few members of the national media recently updated their preseason projections and expectations are still pretty high for the Razorbacks.

ESPN’s Jeff Borzello refreshed his “way too soon” top-25 ranking on Tuesday and moved Arkansas up one spot to No. 10, while CBS Sports’ Jon Rothstein released his offseason breakdown. SEC and picked the Razorbacks to finish third in the league. behind Kentucky and Tennessee.

It seems most outlets agree that Arkansas will be ranked pretty high nationally and finish near the top of the SEC, but there’s far less agreement on who Musselman will start.

Borzello and Rothstein each included their expected starting five and both have the trio of five-star freshmen – Nick Smith Jr., Anthony Black and Jordan Walsh – included, but they differ on the final two spots.

If that’s not enough to show off everything that’s known right now, a member of the local media — Jackson Collier of HawgBeat — has the three freshmen, Mitchell and Missouri, transfer Trevon Brazile into his projected lineup. He also didn’t rule out the departure of Graham or Rhode Islander Makhi Mitchell (Makhel’s twin brother).

The first time this ultra-talented version of the Razorbacks will speak in a real game will be November 7 against North Dakota State. The opener was first reported by WholeHogSports and then confirmed Tuesday morning when the Bisons released their non-conference roster.

North Dakota State has won the Summit League Tournament five times since 2009 and most recently played in the NCAA Tournament in 2019. It has won over 20 games seven times in the last 14 seasons and has only finished below .500 once in the past 11. seasons.

With this news, Arkansas’ 2022-23 non-conference schedule comes into further focus. WholeHogSports announced that the Razorbacks will host San Jose State (Dec. 3) and UNC-Asheville (Dec. 21) in Fayetteville.

They have a neutral site game with Oklahoma at the BOK Center in Tulsa scheduled for Dec. 10 and they will also travel to Baylor on Jan. 28 for the Big 12/SEC Challenge.

Arkansas is also part of the 2022 Maui Invitational. Matchups have not been announced, but the event includes Arizona, Cincinnati, Creighton, Louisville, Ohio State, San Diego State and Texas Tech, and the Razorbacks will play three games Nov. 21-23.

There’s a clear path for Arkansas to achieve a rare “triple-double” by landing three five-star recruits in back-to-back classes, but as of now, the Razorbacks only have one commitment for 2023 and it’s currently a four star.

However, Layden Blocker has put on a show for the past two months with Brad Beal Elite in the Nike EYBL and is likely knocking on the door to be blasted to five-star status. The Little Rock native capped off the summer with a strong performance at Peach Jam last week, averaging 14.0 points, 5.9 rebounds and 4.1 assists to earn second-team All-Star honors. Circuit.

Blocker also earned first-team honors in the Orlando and Louisville sessions and third-team honors in the Kansas City session, as well as an honorable mention at Indianapolis. Playing against top competition, he averaged 16.3 points, 5.9 rebounds, 4.1 assists and 1.4 steals while shooting 47.3% from the floor, 34% from beyond. the arc and 75.7% from the free throw line this summer.

Arkansas is among the least safe states during COVID-19