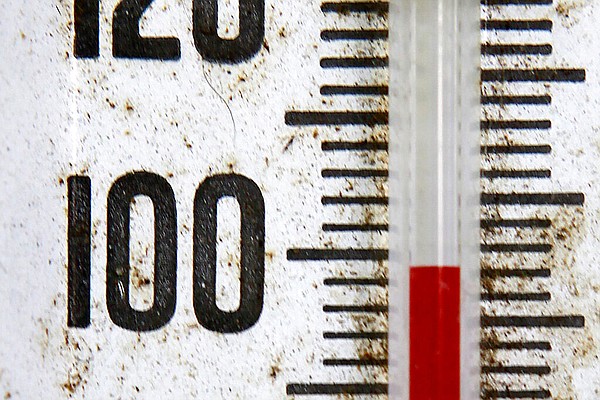 Arkansas will experience its first serious heat wave of the year this weekend, according to the National Weather Service in North Little Rock.

After hitting around 90 degrees today, high temperatures Sunday and Monday will be in the upper 90s for much of the state, said National Weather Service meteorologist Colby Pope.

But it will be more like 105 degrees because of the rain-saturated grounds, he said.

The Pope said high temperatures will be in the 90s at least through Thursday. A brisk wind will make things a bit better on Tuesday.

“Sunday and Monday are the days I really worry about in terms of the heat because we just got all this rain,” he said. “I consider it one of the most dangerous parts of the year because we haven’t acclimatized to it yet.”

Pope said heat advisories could be issued for central and southern Arkansas, but they had not been issued by mid-afternoon Friday.

“Hot, humid and at times oppressive conditions will prevail in the region on Sunday through the middle of next week,” it read. “Daily high temperatures will climb into the low to mid-90s … and heat index values ​​will likely approach or exceed 100 to 105 degrees on some afternoons, with Sunday and Monday currently showing the most widespread potential. for heat index values ​​of the heat advisory level (105 degrees or more).

“In addition to a daytime heat threat, overnight lows will also be of concern…for example, overnight lows in the mid-70s associated with dew point temperatures in the low 70s, resulting in potential relief/cooling minimal overnight.

“Given several days of blistering heat and poor overnight cooling/relief in the forecast through the first half of next week, be sure to check those who will be most vulnerable, adjust exterior plans accordingly and ensure that pets are brought indoors during peak heating hours.”

Colby said people should drink plenty of water and take breaks if they’re outside this weekend.

Fort Smith received the most rain in the state with 2.7 inches in the 24-hour period ending at 3 p.m. Friday, Pope said. Monticello got 2.47 inches over the same span. Hot Springs got 1.86 inches. Little Rock and Fayetteville each got just over half an inch.

Pope said it will be slightly cooler Sunday and Monday in northern Arkansas with heat index readings in the mid to high 90s.

“Do not drive on flooded roadway,” he said in an 8 a.m. news release. “We currently have several vehicles blocked and we are grateful that no one has been injured so far. Do not drive around barricades or law enforcement who are doing their best to block impassable roads.”

A few rivers in Arkansas were in the stage of minor flooding Friday afternoon. This included the Arkansas River in Van Buren and Ozark, the White River in Augusta and Clarenden, and the Fourche LaFave River near Houston, Ark.