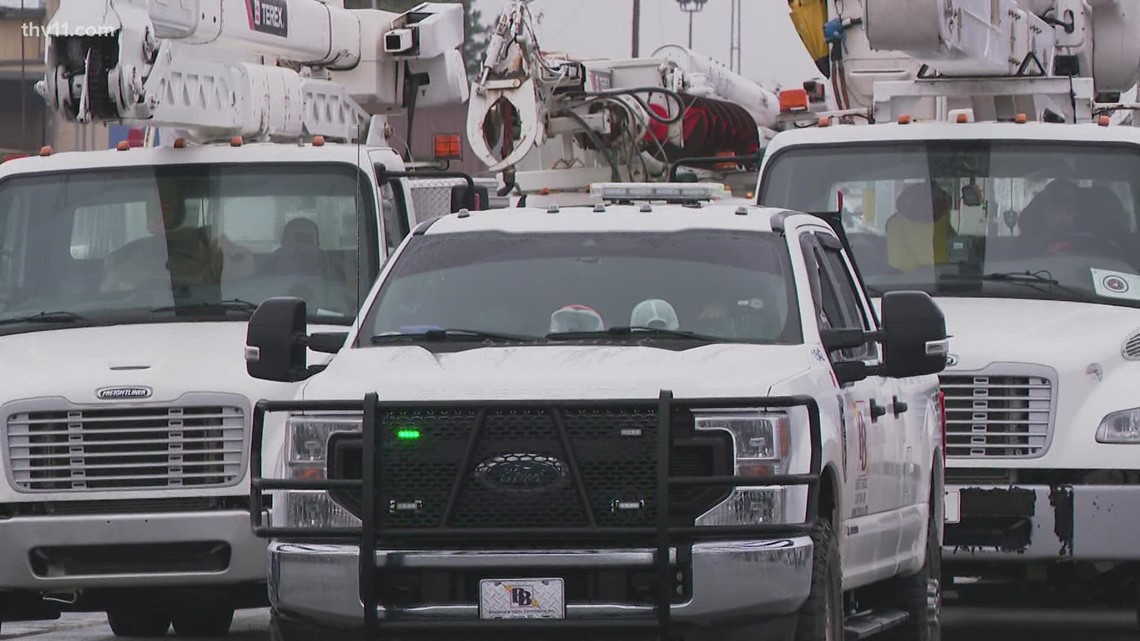 Electric crews have spent days preparing for power outages, using most of Thursday to service thousands of Arkansans without power.

LITTLE ROCK, Ark. – Electrical crews have spent days preparing for power outages as thousands of Arkansans lost power across the state on Thursday.

She said more and more Arkansians were losing power due to Thursday morning’s weather.

“It’s just because of the freezing rain accumulating on those power lines,” Hinkle said.

Most of their outages occurred in northeast Arkansas, but she said the power loss was not limited to just that area.

“We actually saw widespread outages all over the place. Again, from the northern part of the state, up into the middle part and across the delta,” Hinkle said.

Dozens of their linemen, along with other workers, lined up at the Barton Coliseum on Thursday afternoon.

These workers were just part of more than 1,600 workers spread across the state, with each worker doing a different job.

“We have scouts surveying the damage. When the weather clears up, we can send drones up into the air to get to those hard-to-reach areas,” Hinkle said.

Rob Roedel is the director of corporate communications for Arkansas Electric Co-ops. He said the company also worked with thousands of customers who were without power on Thursday.

While every customer is equally important, Roedel reminds people that large population areas are what they focus on first.

“If your home is at the end of a distribution line, you’ll likely be the last to restore service,” Roedel said.

As linemen work to restore power, workers like James Harrison, who works as a public relations officer for East End Towing in Little Rock, have tried to restore traffic flow.

“Actually worked a [accident] at the university that someone swerved and hit a patch of ice and drove about 100 feet off the road,” Roedel said.

Harrison added to that and said he was seeing fewer cars on the roads, which made the day a little easier for him and his colleagues.

He remains hopeful that there will be no traffic problems as the day turns dark, with refreeze being a big concern for him.

“We stayed pretty much at that level, even today it looks like there were fewer cars on the road,” he said.

Harrison also said he received between 15 and 20 service calls approximately every hour.

The crews will loop overnight and resume on Friday morning.