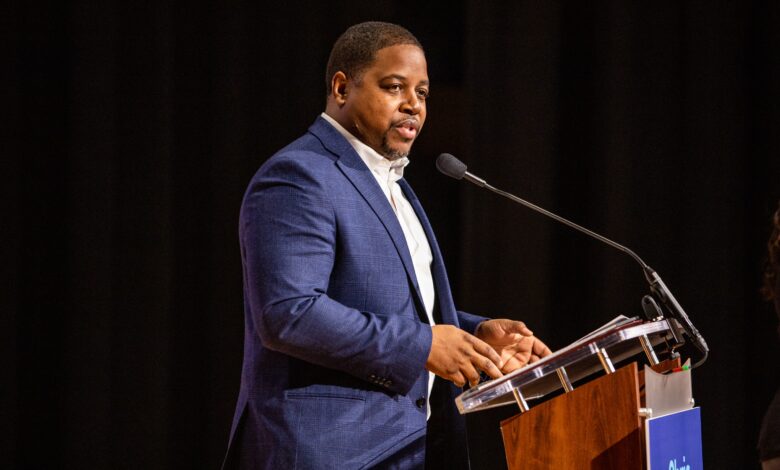 Where:
KATV ABC 7 in Little Rock and throughout KATV’s coverage area. Also viewable online at katv.com. Archive available on YouTube after the debate.

KATV will host a 30-minute debate on Wednesday, October 5, which will air from 6:30-7 p.m. on KATV. The two candidates who chose to run for Arkansas will answer questions from KATV’s Chris May. (See the KATV announcement.)

Sanders’ debate avoidance breaks with Arkansans’ longstanding expectation that people seeking to vote show up at debates and lay out their plans to voters, but that’s not shocking since Sanders has avoided town halls, media interviews and public appearances throughout the campaign. Backed by a largesse of out-of-state donations and black money, Sanders has failed to show up throughout this campaign, trying to buy this election while participating on the sidelines. Meanwhile, Chris Jones is running a smart, sincere and effective grassroots campaign focused on meeting voters where they are, walking a mile in their shoes and really listening and responding to issues. Jones visited every county in Arkansas to listen, learn, and share his vision for spreading opportunities statewide like “PB&J” – high-quality education starting with preschool, infrastructure starting with broadband access for all and real economic development starting with good paying jobs.

“Voters have a choice: a hard-working Arkansan running for all Arkansans or my opponent. I work hard to take every opportunity to share my experience and my vision to uplift every Arkansan across the state. I am the only gubernatorial candidate with the executive leadership experience to get the job done, and the only one who will show up every day to make Arkansas government work for all of our neighbors — and who really wants to govern. My sole ambition is to help unlock the promise of Arkansas, a state that laid the foundation for my success, so others can thrive like me,” says Jones. “I will always show up for the neighbors of our great state, share a vision and stand up for myself. On the contrary, the Arkansans tell me that they neither see nor hear of Sarah Sanders. Together we can choose community, progress and love over chaos, justice and extremism.

Just weeks before voting began, Sarah Huckabee Sanders offered no plan to Arkansas voters, instead relying on divisive DC talking points. Sanders’ hardline stances are pushing independent and moderate Republican voters toward Chris Jones — so there’s every reason in the world for her to skip a scheduled KATV debate, along with several other debate invites. Sanders’ disappearing act doesn’t do him a favor either, because Arkansas voters want and deserve a governor who will run for them, and avoid only the most strictly controlled interviews and appearances. The Arkansans want a governor like Chris Jones who will work hard to win their vote and while in office to bring people together to uplift all corners of the state.

As governor, Jones pledged to lead for all Arkansans, not just those who love him or voted for him. Jones is asking voters in Arkansas to register to vote by Oct. 11 and “choose community over chaos” by voting Chris Jones for governor in the Nov. 8 general election.

Background:
Chris Jones is here to prove that politics and governance don’t have to be divisive and destructive, and that we solve our problems by bringing people together. The Arkansas Promise is rooted in Arkansan values ​​of faith, hope and hard work. Commit to expanding quality education for all families starting in preschool, reducing costs for technical schools and community colleges, supporting public universities in Arkansas, increasing teachers’ salaries and benefits and to stimulate economic development focused on the creation of well-paying jobs is the starting point of The Promise of Arkansas.

Case For and Against Pittman as Arkansas Football’s Mike Anderson