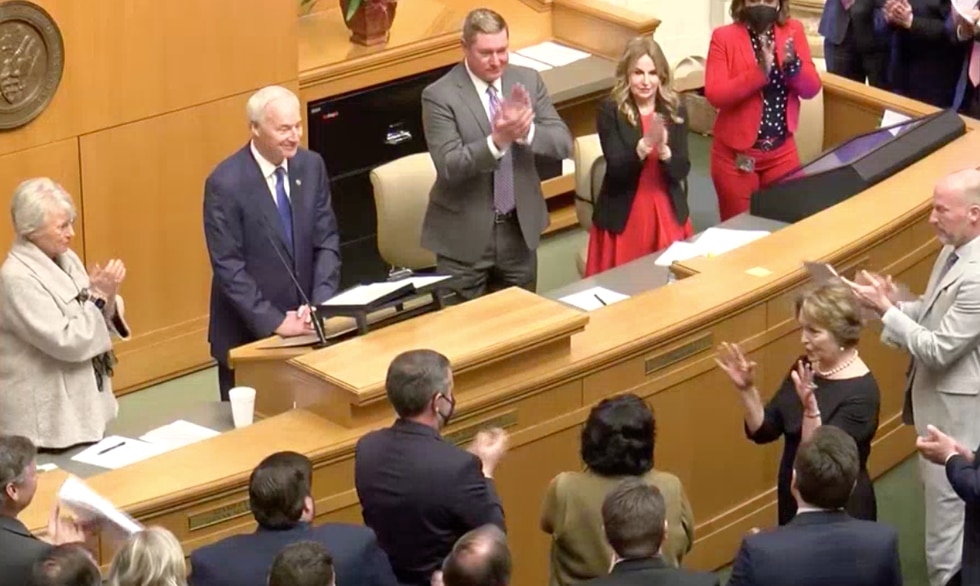 LITTLE ROCK, Ark. (AP) – Arkansas Gov. Asa Hutchinson on Monday called for tapping into the state’s surplus to give local law enforcement a one-time payment of $5,000 and new equipment, as the Republican was delivering his final state of the state address.

Hutchinson, who is serving his final year as governor, kicked off a legislative session that he and key lawmakers hope to keep focused on the state budget despite efforts by some Republicans to enact new abortion restrictions and address other culture wars issues.

Hutchinson said he would support a plan to make the one-time payment to every certified county and city law enforcement officer in the state, a move that will cost the state $45 million. He also proposed using an additional $10 million in surplus funds to provide grants to law enforcement agencies for equipment, including body cameras. Finance officials said they expect the state to end the current fiscal year with a $500 million surplus.

Hutchinson’s speech was briefly interrupted by protesters opposed to his plan to use up to $100 million in surplus funds for a nearly 500-bed expansion of the state’s prison system. Chanting and shouting “no new cages”, the demonstrators were expelled from the gallery of the House.

Hutchinson said the expansion was necessary due to expected growth in the state’s prison system and to reduce the backlog of state inmates housed in local jails.

Hutchinson did not address efforts by some Republicans to enact an abortion ban similar to Texas’ restrictive law, which leaves enforcement to private citizens through lawsuits rather than prosecutors through lawsuits. criminal charges.

Hutchinson, who has signed several abortion restrictions since taking office in 2015, said the state should wait to see what happens to the Supreme Court, which will rule on the Mississippi law this year. which prohibits abortions at 15 weeks. This ruling could weaken or overturn the landmark Roe v. Wade who legalized abortion nationwide.

Another abortion measure filed Monday would add rape and incest exemptions and change penalties for an outright Arkansas ban enacted last year that was blocked by a federal judge.

Any abortion proposal would require the support of two-thirds of lawmakers in both houses to be considered, as the session is intended to focus on the state budget.

Hutchinson has proposed a $6 billion budget for the coming fiscal year that increases state spending by 3.3%. The proposal includes a salary increase for state troopers and additional funding for programs for people with developmental disabilities.