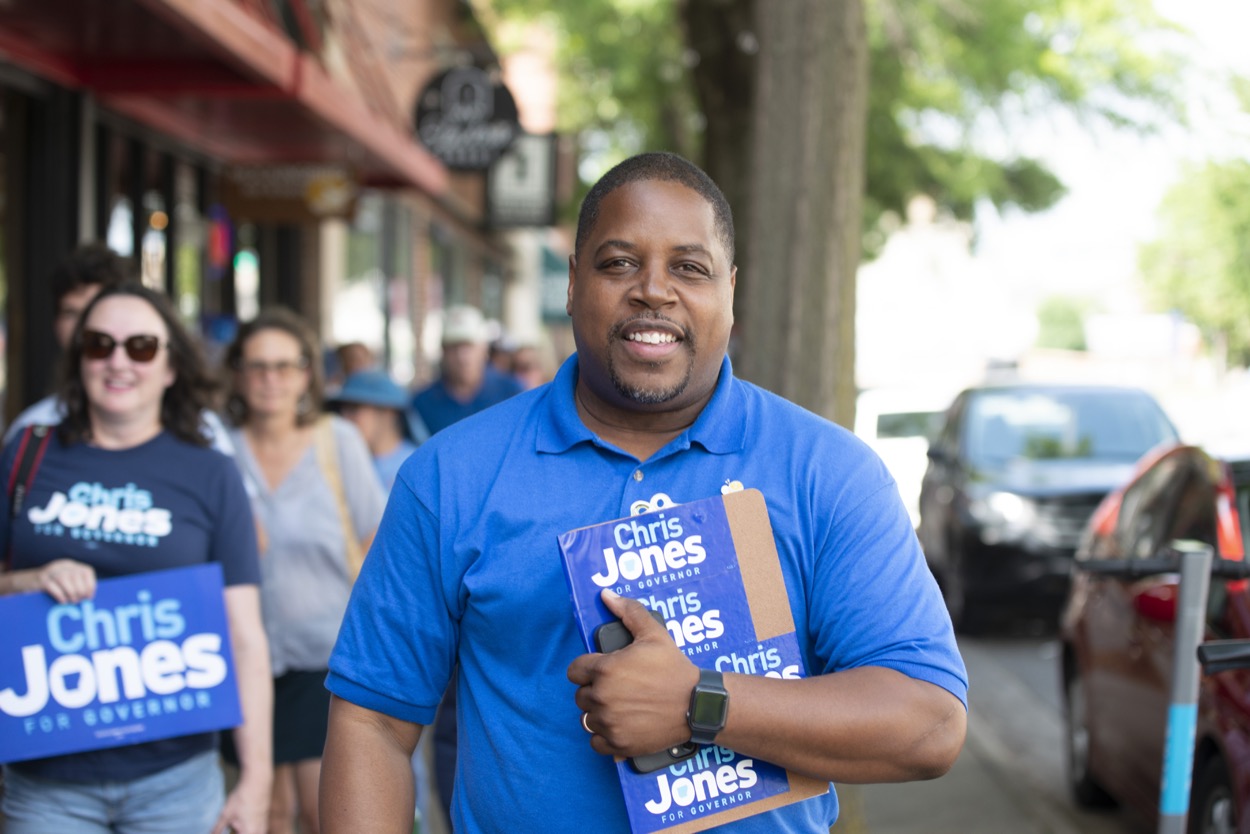 Democratic candidate for governor Chris Jones logged the first of the 75 miles he pledged to run — one in each county in Arkansas — in the SoMa neighborhood of Little Rock Wednesday.

A troupe of around 25 met him outside Community Bakery to kick off his Walk a Mile tour. The particularly diverse and good-natured mix of young and old, black and white, posed for a group selfie before heading south.

Along the way, Jones highlighted favorite small businesses and talked about the work he’s done as head of the Arkansas Innovation Center to encourage and support local entrepreneurs. He also supported a small business, briefly dipping into Loblolly for a scoop of cookies and cream.

Willie Torrence and his wife traveled from Sherwood for the walk, wearing matching Chris Jones t-shirts and pledging to take part in at least five or 10 more campaign-planned walks across the state. Torrence said he hopes the summer heat and the extra steps help him lose five pounds, but he mainly wants people to see him working for the candidate he’s backing in hopes of inspiring others. people to do the same.

“I’m here because he’s the right person for the job. I am here for the change, but we have to come out here and do it,” he said.

Jones’ efforts to stay in the public eye and invite supporters and media along the way are the opposite strategy of Republican candidate Sarah Huckabee Sanders, who appears to be hiding from local media and limiting her public appearances, or the minus those of Arkansas. As the daughter of former Arkansas Gov. Mike Huckabee and a former press secretary for Donald Trump, Sanders comes to the campaign with a double whammy for name recognition. Jones, an MIT-trained physicist and ordained minister of Pine Bluff, comes to the campaign without such political ties.

Walker Richard Hutchinson, a retiree and public education advocate, said he showed up to endure a mile in the afternoon heat because he wanted to help get Jones’ name out there.

“People in this state say a Democrat can’t win. I’ve said it myself once or twice. But I think people should listen to what he has to say,” Hutchinson said.

Noelle Buttry invoked the power of branding by wearing a Chris Jones t-shirt for the governor and also carrying a campaign sign. She said she was convinced of Jones’ “PB&J” plan to focus on preschool broadband Internet access and jobs.

“If people just listened to it for five minutes, it wouldn’t be a question of who to vote for,” she said.

Louisiana, Arkansas Congressional lines are more or less the same