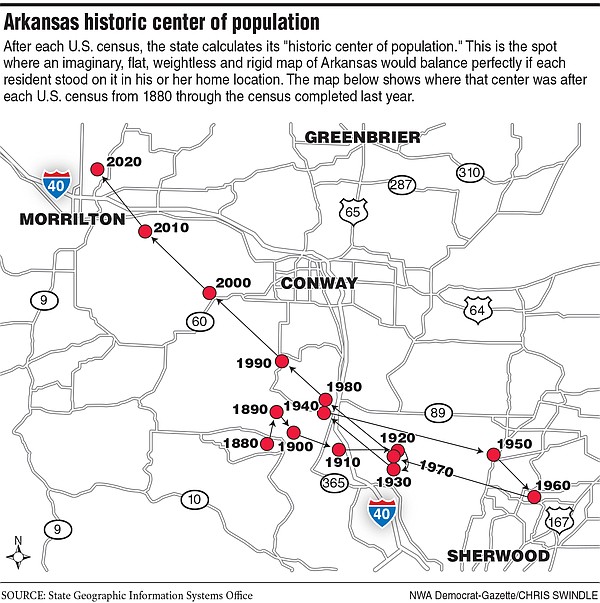 * Southside was incorporated as a city in 2014

Arkansas’ population shift to the northwest shows up in U.S. Census data and in decisions based on that data such as the distribution of state legislative seats.

The census results also reveal a specific location showing the change: the state’s “historic population center” – the place where an imaginary, flat map of Arkansas would balance perfectly if every resident of the state stood on it in its place of origin.

The center never went west of Perry County or further north than Mayflower in Faulkner County for 100 years between 1880 and 1980, according to state calculations. The State determines these centers after each decennial census.

The balance point in Arkansas now lies north of Morrilton at Overcup Lake in Conway County, the state’s Geographic Information Service office calculated Dec. 17 based on census figures from 2020. The last center continues a constant northwesterly trajectory for every census since 1980.

“Soon, if lawmakers in urban centers in northwest Arkansas and central Arkansas agree on something, they’ll push it through the Legislature,” said Bill Stovall, who was president of the Arkansas House in 2005 and 2006. The concentration of representation in these urban areas and northeast Arkansas will become too large for the rest of the state to compensate for, he said. declared.

“If they can make a political alliance, they can set tax and tax policy,” he said.

The partisan divide between Republicans in northwest Arkansas and a delegation from Pulaski County in central Arkansas, which is still largely Democratic, will make little difference, Stovall predicted.

“The political divide in the state will be less of a Republican-Democrat divide and more of an urban-rural divide,” he said.

The state still has 23 Democrats in the 100-member House and parts of central Arkansas are Republican-leaning, he said. Stovall was a Democrat during his four terms in the House.

Thirteen members of the 100-member House live in Washington or Benton County. New district maps approved on November 29 will bring that number to 17. Legislative districts are redrawn after each census to equalize their populations.

Pulaski County, the state’s most populous county and home county of Little Rock, the state’s capital and largest city, will have 13 House members. Neighboring Faulkner County will have six. Any extent that the delegations from those counties agree would need 15 votes from the remaining 64 members of the House to pass that chamber. Five other House seats will be wholly or partially in Crittenden County, which includes Jonesboro. Four others will include all or part of Sebastian County, which includes the state’s third-largest city, Fort Smith.

These five counties are now the only counties remaining entirely within the district after new boundaries were drawn earlier this year. Part of Sebastian County also in the district includes Fort Smith, which is now the third largest city just ahead of Springdale, according to census results. No part of another county is in the district

Also in 1982, Benton County voters cast 26,322 ballots in that year’s gubernatorial race. Washington County’s total in the same contest totaled 29,705. The two counties combined totaled 7.1% of the vote that year. In the last gubernatorial race in 2018, Benton County received 77,534 total votes. Washington County voters cast 65,863 ballots in this race. The two counties combined accounted for 16% of the vote, or almost one in six of all votes cast. If the state’s population growth were equal, this percentage would have remained the same.

Much more plays into the shift to the northwest than growth in northwest Arkansas, said Shelby Johnson, the state’s chief geographic information officer.

“You can trace that back to the mechanization of agriculture in the 1960s,” Johnson said in a phone interview Tuesday. “As late as the 1940s and 1950s, the population of the state was in the east.

People go where the jobs are, he said. Agriculture was the largest sector of employment in the state before machines such as cotton combines and other harvesters took over row farming.

“In the 1920s and 30s and into the 1940s, agriculture and the people who lived off it were rooted in Pine Bluff and Helena,” Johnson said. State calculations show the population center landed as far east as present-day Sherwood in Pulaski County after the 1960 census, then fell back north to present-day Maumelle the next census. The center has shifted north and west in every census year since, records show.

Growth in the Jonesboro area of ​​northeast Arkansas is pulling the center north, even with the greatest growth to the west, Johnson said.

The main practical effect of this change is economic and political, Helena-West Helena Mayor Kevin Smith said. Smith is a former state senator. Prior to that, he served in Washington, DC on the staff of the late Senator Dale Bumpers, D-Ark. Smith successfully ran for mayor in 2018.

“A century ago, Helena was what northwest Arkansas is today,” Smith told Arkansas Democrat-Gazette columnist Rex Nelson in 2019. “State where people moved because there were jobs. We were among the best cities in the country for the hardwood industry with several large sawmills. “The city located on the banks of the Mississippi River enjoys access to this waterway.

Smith said he was not surprised at the location of the new population center when contacted by phone Tuesday.

“It sure looks like it,” he said, referring to the state’s politics and economy moving away from the east. “But I believe in clockwork. There’s a couple right now who bought one of the historic homes here and are restoring it who worked for Walmart. They can do what they do remotely and work from home.”

Her son, Smith said, moved back from California and is in the process of buying a house in town for the same reason: relatively low real estate prices coupled with the ability to work from home thanks to better internet connections.

“Northern California is beautiful, but first there were housing prices and then the wildfires came,” Smith said.

Groups such as the Walton Family Foundation and the Northwest Arkansas Council, both of which identify and work on regional issues, have cited rapidly rising housing prices as a serious threat to the continued growth of northwest Arkansas. .

“If people can work wherever they want, it’s all about education and quality of life,” Smith said.

People will work and live in neighborhoods with good schools, affordable housing and access to essentials such as clean water, which his city has in abundance, he said.