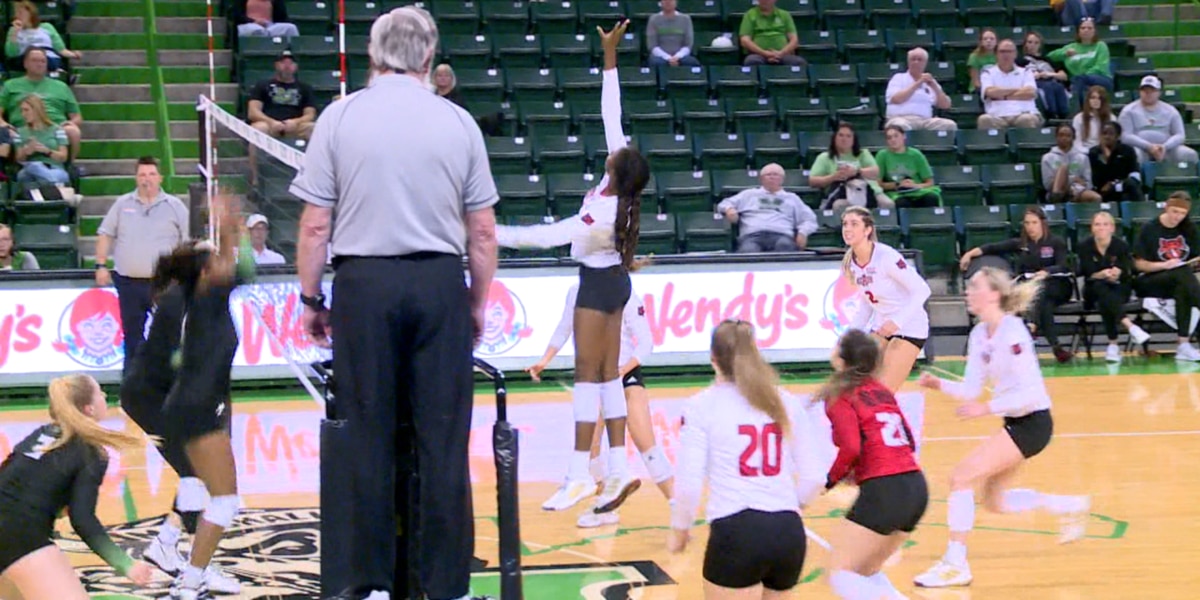 Bailey Helzer and Macey Putt combined for 45 of the Arkansas State volleyball team’s 71 game-clinching wins on Thursday night, but Marshall took two late points to escape with a biting 3-2 victory at inside the Cam Henderson Center.

A-State hit .222 as a team, with Elise Wilcox hitting a team-high .324 on her 13 kills with a pair of service aces. Lauren Musante had 29 assists, while Kassidy Reeves notched a double-double with 28 assists and 18 digs. Libero Sarah Martinez also recorded a double-double with a record 25 digs to go along with 11 assists.

Marshall took control early in the first set, leading by as much as four points at 10-6 before A-State rallied to equalize several times. The hosts pulled away late to take a 23-18 lead before Red Wolves came within one. Marshall would go on to take two of the next three points to win the set 25-23 and lead 1-0 in the match.

The teams traded leads in the second until after media timeout, when A-State relied on a 6-1 run capped by a Maddie Wiersema kill to lead 20-15. Herd cut the deficit to three, but Red Wolves claimed four of the last five points to win the set 25-19 and tie the game at 1-all.

The third set was much the same, with Arkansas State escaping with a 5-0 run to lead 18-13 after Billings and Reeves teamed up for a block. A-State didn’t hang around the rest of the way, despite a late push from Marshall, to clinch the set and a 2-1 lead in the match on a block from Billings and Putt.

A-State picked up that momentum in the fourth, quickly taking a 4-2 lead. Marshall then took seven straight points to regain the lead and lead 9-4 against Essence Clerkley. The Red Wolves cut it to 10-8 on a block from the Wiersema twins, but Thundering Herd took nine of the next 11 points to extend their lead to 19-10. After a McElhaney kill later made it 23-17, A-State continued to close with two more runs, but Marshall would take the set and force a deciding fifth set with a 25-19 decision. .

The Red Wolves took four of the first five points in the fifth after a kill from Wilcox, then pushed that lead to 8-4 after an ace from Putt and a kill from Helzer. Marshall then rallied to equalize at 11, which would precede five lead changes and seven more ties, then held match point after a service error. Helzer saved the point and then teamed up with Kyla Wiersema for the block to give A-State 16-15 match point.

McElhaney then registered two kills to put the Herd back in front 17-16, but Helzer responded with his final two kills to put the Scarlets and Blacks ahead 18-17. A kill from McElhaney, followed by a block gave the home side a 19-18 lead, with an ace from Bella Thompson to win the game.

Arkansas State closes out the regular season Friday in a rematch against Marshall, with a first serve inside the Cam Henderson Center scheduled for 5:00 p.m. CT on ESPN+.