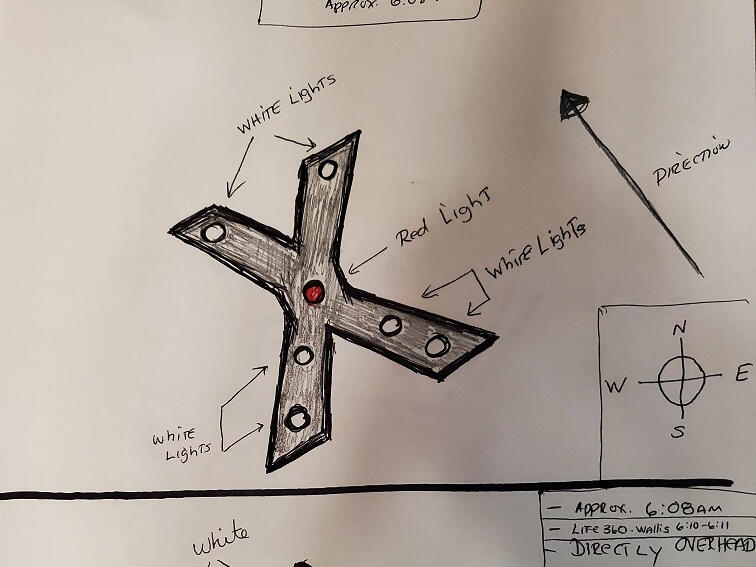 An Arkansas witness in Cave Springs reported a brief UFO sighting just after 6 a.m. on Feb. 1, 2022, that looked like a giant “X” in the sky, according to testimony from the National UFO Reporting Center (NUFORC .org).

“I turned north on Sands Road and noticed what I first thought was a plane,” the witness said. “They are extremely common as we are close to XNA (Northwest Arkansas National Airport) airport. However, it was a very strange and large shape of an ‘X’ or plus sign. It was moving slowly, just below cloud level at a slight upward angle to the north-northwest.”

The witness observed the craft enter the cloud layer and disappear inside.

“Didn’t hear any jet or propeller aircraft noise. I turned west on Wallis Road trying to keep seeing its way and turned left (south) into the driveway of the subdivision. There were no vehicles present in any direction. I I continued and stopped to try to regain my sight, but he was gone. I was amazed and had no the presence of mind nor the time (since it disappeared so quickly) to pull out my phone for a video or photo capture.

The witness is an airplane enthusiast and said, “It wasn’t an airplane.”

“The two upper ‘arms’ of the craft (for lack of a better description) of the craft had a light on the end (white). The very center of the ‘X’ or plus sign had a red light. two lower arms had two lights each (on each arm). I made some drawings of the shape to define as best as possible what it looked like. It was way too big to be a drone. This contraption would have been between 50 and 100 feet in size.

“It was not a LifeFlight helicopter, Osprey or other military craft. The craft was silent. Nothing was audible. I wanted to try and demystify what I saw, so I downloaded and checked the Flightpath 24 software on my phone There were three flights between 6am and around 6:15am None of the flight paths were over my house that morning The closest flight path was several miles south. I finished a screen recording of the flight paths to try to refute what I had just seen, but that was just reinforced the reality of it.”

The witness is a senior director of business development in consumer goods and in his 50s.

“I am analytical with knowledge and skills in data analysis, as well as a minor degree in computer science.”

The witness reported that the duration of the UFO sighting was between five and 10 seconds.

Cave Springs is a town in south-central Benton County, AR, population 5495. NUFORC lists 34 reports from Arkansas as of January 1, 2022. The Mutual UFO Network (MUFON) received 10 reports from Arkansas in September 2022, according to their October newsletter. This case was reported to NUFORC on February 2, 2022. Witness quotes have been edited for clarity.