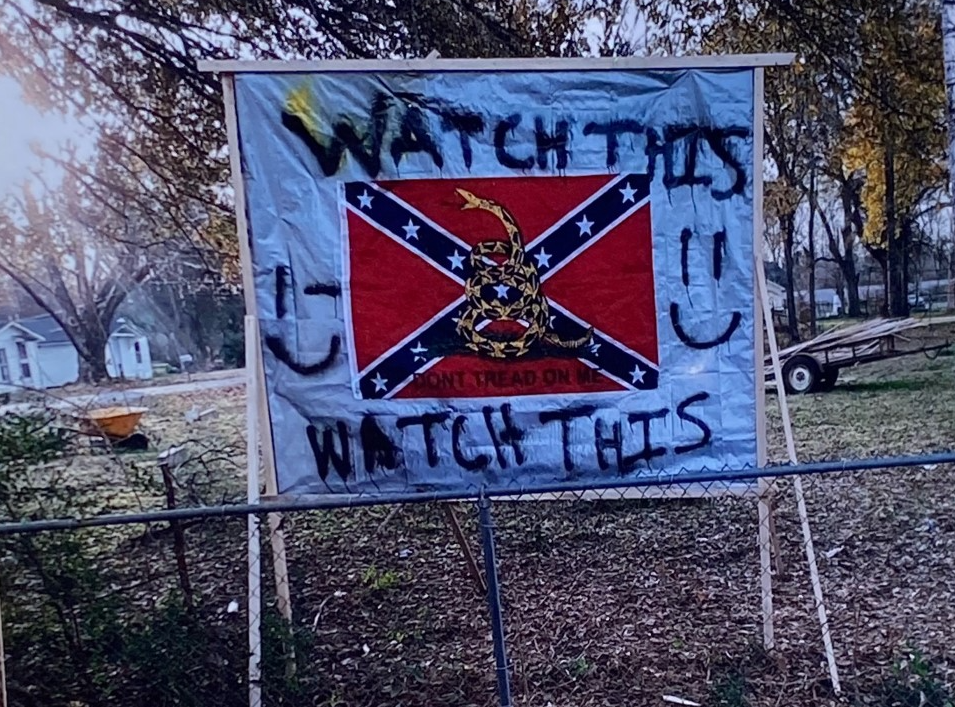 The latest incident happened on Friday afternoon when Nedra Cook said her neighbor, Steve Howard Jr., arrived and pointed a gun at her.

“It was supposed to intimidate me and it did,” Cook said.

It’s all part of an ongoing feud that centers on a Confederate flag that was put up next to Cook’s house with a message that reads “Watch This.” Cook said Howard flew that flag after saying she felt threatened and set up a security camera on the side of her house.

“So we could watch and see what was going on,” Cook said.

A woman dies in a shootout involving an officer in Ark.

The feud dates back to October when Howard and his friends allegedly built a bonfire and Cook complained.

“I was worried because the wind was blowing and there were flickers of flames in the wind and I was afraid my house would catch fire,” Cook said.

Cook also claims the burn violated the city’s ordinance. So she called the fire department.

“And they came here and they put it out,” she said.

“And then he said when we come back, we’re going to wear our dresses,” Cook said.

So she set up the security camera and Howard put up the flag. Cook took photos of the flag and said she gave them to the Poinsett County Assistant District Attorney. She also said she filed an affidavit against Howard.

Howard’s grandfather, Joe Howard Jr., said the case went to court on Monday, but says the allegations against his grandson are ridiculous.

Nonetheless, a judge agreed to issue a no-contact order, which Howard allegedly violated during Friday’s incident at Cook’s home. He has been locked up in the county jail and will not be released until Monday, when he and Cook will present their case in court.

“You can’t just bully people, terrorize people,” Cook said. “I’d rather die than crawl on my knees and be afraid to stand up for what’s right.”

We have asked the Poinsett County District Attorney’s office to clarify the charges against Howard, but are still awaiting a response.