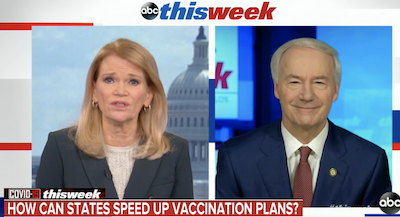 ONCE AGAIN WITH FEEL: The governor’s avoidance of criticizing a dangerous crackpot was an embarrassment, but ignored by state media.

Sorry, but once again with the feeling on Governor Hutchinson’s whim avoidance to repudiate the violent insurgent who is a Republican congressman from Georgia, Representative Marjorie Taylor Greene.

Due to a near total lack of coverage of Arkansas, I recap what I wrote here yesterday by providing Hutchinson’s verbatim response when asked about Greene on a national news program in ABC:

Marthe Raddatz: And another question about a congressman, a new Republican congresswoman, Trump loyalist Marjorie Taylor Greene, she’s long embraced conspiracy theories like qanon, voiced support for the execution of Nancy Pelosi, is- she fit to serve and should she be on the Education Committee?

Huchinson: Well, it’s — first of all, the people in her district elected her, that should mean a lot, they elected her and she’s going to run again and she’ll be responsible for what she said and her acts. Then –

Raddaz: Given her history, is she fit to serve?

Huchinson: I’m not going to answer this question of whether she’s fit to serve because she believes in something that not everyone accepts, I reject that, but she’s going to represent herself. I don’t think we should punish people from a disciplinary point of view, from a partisan point of view, because they think something a little different. We have to make sure we don’t split our party. I’m more troubled by someone who opposes Liz Cheney because she took a different stance than many others in the party, that’s the kind of thing that tears our party apart. We shouldn’t start criticizing everyone because we don’t like the way they are handling things after the election.

Raddatz: But Governor, you’re saying you shouldn’t prosecute someone because they’re thinking something a little different, she believes in conspiracy theories, that there are pedophiles running Washington.

Huchinson: I reject that. I wouldn’t vote for her. I wouldn’t vote for her. The second question is: should the House of Representatives sanction it? I’m not going to get involved in that. They’re going to have to make that judgment. But when you have great diversity of a party, you reject the extreme elements, that’s not the traditional GOP, and that’s what we have to come back to, we have to have respect for those who supported Donald Trump . We want — because they have a message, they have a concern, but at the same time, we don’t want to cover up the terrible actions that happened on Capitol Hill. We need to hold people accountable for this, it is extremely important.

Party unity is more important than lambasting a fully baked hazelnut cake that apparently approved of putting a bullet in the head of the Speaker of the House? Criticizing Liz Cheney is worse than criticizing an insurgent?

Exactly how far would it have to go before a belief qualified in Hutchinson’s mind as something more than “something not everyone accepts”. If assassination is not permissible, what in God’s name does it matter?

Hutchinson’s comments captured national attention. I haven’t seen any coverage of Hutchinson’s appearance on ABC by Arkansas-based media, other than comments about COVID-19. Please let me know if I missed them.

Any decent human being would get a court order to stop Greene walking around with a gun in his purse.

But Greene is special because she works at the People’s House. Under our Constitution, she cannot be fired. She can, however, be expelled.

Republicans don’t have the decency to kick out a member with murder, bigotry, and anti-Semitism in his heart, a gun in his purse, and a desire to overthrow the government in which he serves.

Our Constitution requires a two-thirds majority vote to remove Greene. It will only happen if 59 of the 211 House Republicans have the basic human decency to kick out a member with murder, religious bigotry and anti-Semitism in their heart, a deadly weapon in their purse and a declared desire to overthrow the government. in which she serves.

A former congressman and homeland security chief who is now the governor of Arkansas doesn’t want to talk about it. He clearly wouldn’t vote to kick him out. I expect nothing better from representatives French Hill, Bruce Westerman, Steve Womack and Rick Crawford. Especially not the seditionist Crawford.

And the mainstream Arkansas media – looking at you Democrat-Gazette – doesn’t think those comments were newsworthy?

Arkansas population grows by more than 87,000 in ten years