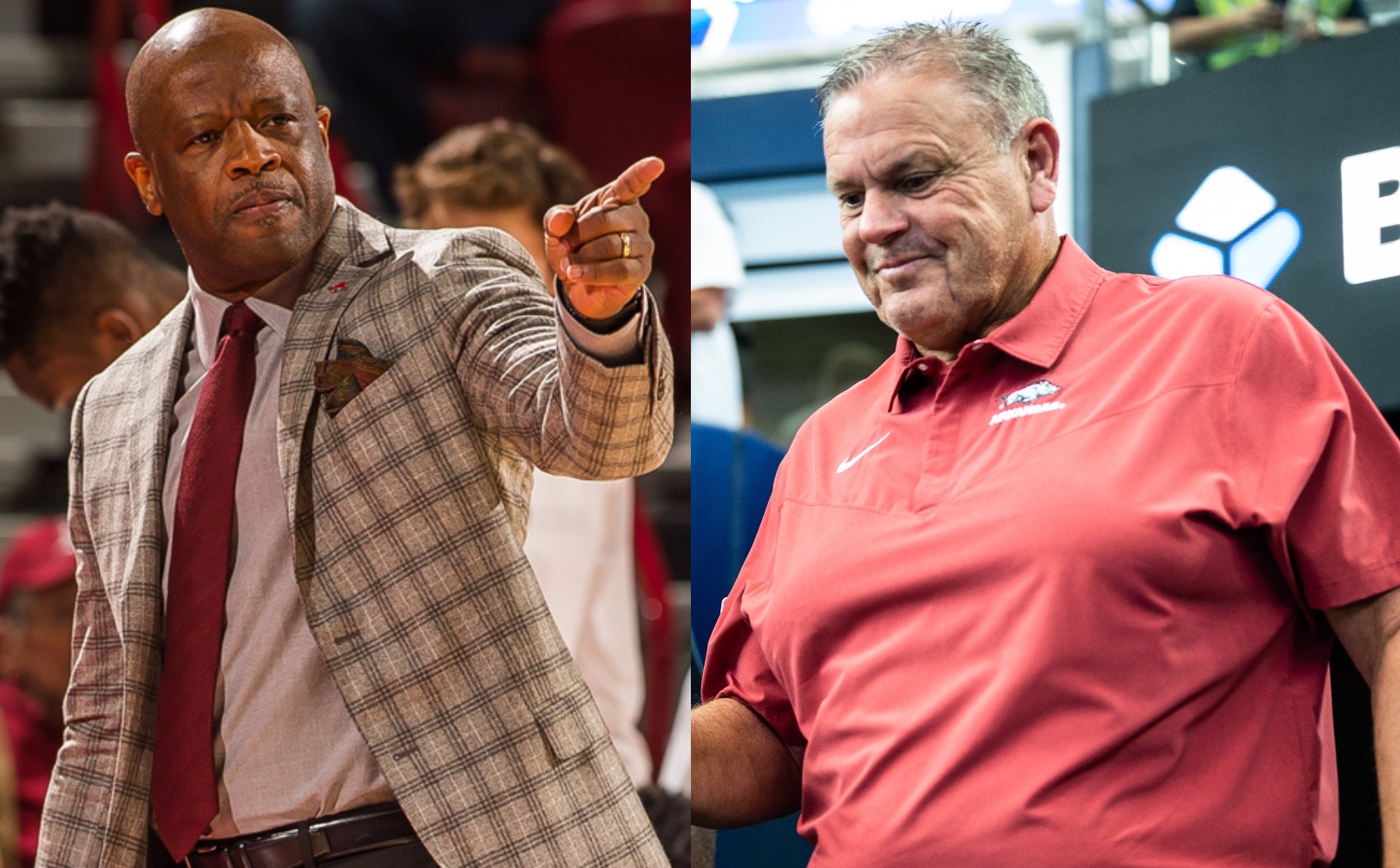 Case For and Against Pittman as Arkansas Football’s Mike Anderson

Arkansas’ back-to-back football losses, including a 49-26 loss to a large home crowd for its 16th straight loss to Alabama, have likely already rekindled an unwanted familiar feeling for at least some of the base. fans.

After all, it’s a song Arkansas fans know all too well – a song heard thousands of times in Fayetteville. It’s okay: A promising good season followed by mass media and fan hype. The discussions and excitement for a breakout year are heard throughout the offseason. The next season is finally here, and everyone is ready and excited that “this is the year”. When the dust settles, however, the breakout never happens. A season launched with so much expectation and hype finally lands with a sound of mediocrity.

This song isn’t just football specific either. Whenever fans think the music has changed, regardless of the sport, this “endless cycle song” keeps playing. What they don’t want is for Sam Pittman’s journey to follow a similar path to that of former basketball coach Mike Anderson.

Anderson brought promise and stability to a team that needed it but could never take the next step. Is Pittman destined to become the Mike Anderson of the football world, or will he eventually break into the next elite level?

In March 2011, Mike Anderson left Missouri – where he said he would stay “a long time” and “retire” – to return to Arkansas as head coach. He had spent 17 seasons as an assistant for the Razorbacks under legendary coach Nolan Richardson.

When Anderson took over, Arkansas’ basketball program had been in disarray for most of the previous decade. The Razorbacks hadn’t reached the NCAA Tournament’s Sweet 16 since 1996, and the entire program was a shell of itself. Anderson was brought in to fix the situation and bring Arkansas basketball back to the national stage.

His first season did not bring much, failing to improve the record of his predecessor. In the seasons that followed, Anderson further stabilized the previously delicate situation around the program. For fans though, Anderson’s tenure in Arkansas has been an intense and emotional rollercoaster.

Promising seasons were ruined by late-season meltdowns and inconsistencies plagued Anderson’s teams. In 2013-14, Anderson led the Hogs to a 22-12 record, but an ugly loss in their regular-season finale and a first-round loss in the SEC Tournament led Arkansas to miss the NCAA Tournament.

The following season was arguably his best in Arkansas, ending the year 27-6. Arkansas finished second in the SEC and entered the NCAA Tournament as the 5th seed, but lost 87-78 to 15th North Carolina in the Round of 16.

Anderson spent a few seasons in Arkansas where he seemed poised for a breakthrough, ready to bring the Hogs into the national spotlight. He managed to make the program respectable again, never finishing under .500, but was never able to take the next steps to elite status. Every season, fans heard the buzz of that familiar old song – the song of disappointment and disappointment after so much excitement and hype.

That ultimately resulted in Anderson being fired in 2019 after an eight-year run in Arkansas in which the Sweet 16 drought reached 23 years.

Pittman faced a similar situation, taking over a football team that was on a downward spiral and tasked with reviving a dead program. He, like Anderson, was also a former assistant coach at Arkansas and there was a “coming home” feeling.

For the sake of Arkansas fans, this is hopefully the end of the parallels. If the fans get what they want, Pittman will “turn on that goddamn jukebox” and dance to his own tune in Fayetteville.

Similar to the situation Mike Anderson faced upon arriving in Fayetteville, Sam Pittman was thrown headlong into a program that desperately needed a leader. Both were able to quickly transform their programs starting with an intense cultural change.

An example of Anderson’s culture shift was increasing graduation pass rates, preaching success on and off the field. Pittman built the football program with a blue-collar mentality that fully embodied and embraced what it meant to play for the Razorbacks.

Both coaches managed to achieve a level of success and took their programs out of a hole. In the many years of Arkansas football before Pittman, there was a series of coaches who were good, but never elite.

Houston Nutt and Bret Bielema had talented rosters and high hopes, but never achieved that next level of success. The only exception would be Bobby Petrino, who had Arkansas on the verge of becoming an SEC powerhouse before his infamous motorcycle accident. Pittman replaced Chad Morris, who didn’t even survive two full seasons as head coach.

In his freshman season, Pittman helped end the Razorbacks’ long SEC losing streak and made them competitive again, despite going 3-7 in the final. He followed that up with a 9-4 campaign capped by an Outback Bowl victory, which landed Arkansas in the latest AP poll for the first time in a decade.

Bringing it to the Present for Pittman

Entering Sam Pittman’s third season, Arkansas retained most of its coaching staff, including all three coordinators, and fired its star quarterback and four of five starting offensive linemen. . On top of that, the Razorbacks were able to grab several prolific players from the transfer portal.

The Razorbacks were set for a big season, and the hype from national media and fans was the highest in a decade. Cut to the present day and Arkansas is 3-2, with a disappointing loss to Texas A&M and a loss to Alabama. The team regressed in several areas where it was supposed to have grown and improved.

So far this season, Arkansas has fallen apart in several crucial situations. He has one of the worst pass defenses in the nation and has continually kept teams on the field in third-and-long situations. Exhibit A would allow Alabama backup quarterback Jalen Milroe to rush for 77 yards on a crucial third-and-15. This play essentially ended the momentum that had swung heavily in favor of Arkansas in the previous quarter.

A parallel can be drawn between Arkansas’ defense this season and Mike Anderson’s teams of the past. Although two completely separate sports, similar sentiments and patterns emerge. Anderson preached fast basketball, staking his name on an aggressive defense that capitalized on turnovers. Despite this philosophy, defensive shortcomings and inconsistency were something that plagued Anderson’s teams every year. A pattern had been established and it was driving Arkansas fans crazy.

It was almost a yearly habit for Anderson teams and habits are hard to break. That’s what Pittman has to avoid with his own team – setting that same pattern and creating bad habits. The Razorbacks can’t afford to fail and crumble either side of the ball. Consistency is the key. The offense and defense must play at the highest level every year to compete for top spots in the conference and threaten teams like Alabama.

Player growth and development are also things that need to be considered. Anderson never seemed able to fully exploit and capitalize on player progression. Sam Pittman can’t afford to do the same. Under Pittman’s guidance, players must ultimately progress, not regress. Last season, star quarterback KJ Jefferson had a fantastic year. Everyone expected KJ to have an even better year in 2022 and some even considered him a competitor to the dark horse Heisman. So far this season, that hasn’t been the case.

In some ways, it looks like Jefferson has regressed from a year ago. His completion percentage dropped from 67.3% to 66.1%, which isn’t a huge drop, but Jefferson consistently missed passes he seemingly finished with ease last season. Of course, it’s fair to mention that his favorite target from a year ago, Treylon Burks, is now in the NFL.

Jefferson played a big part in the Razorbacks’ 3-0 start, which included a win over a currently No. 24-ranked Cincinnati team, but he also had ball safety issues that never really showed up. last year – including the bad decision to jump. from the 3-yard line against Texas A&M. If Pittman’s teams are going to take the next step to greatness, his star players must do the same.

Pittman vs. Anderson – The Takeaways

Familiarity and parallels can be drawn between Mike Anderson and Sam Pittman. Ultimately, it’s too early in the season and in Pittman’s tenure to make any clear statements about his team’s future.

Pittman still has the vast majority of Arkansas fans in his corner. It’s significant that in the Outback Bowl against Penn State he got a win over a marquee opponent, because the lack of such playoff wins was a big criticism against Anderson. Granted, the start of 2022 showed some regression from last year, but there are still seven games left in the season – and a lot can happen in just seven games.

Collapse patterns and bad habits should not extend inside the program. Mistakes like allowing three 70-plus-yard runs in six games against Alabama, or not chasing the ball carrier on the 97-yard fumble return against Texas A&M, can’t happen.

Mediocrity and the “almost” cannot become normal. Errors similar to these are part of the reason Anderson’s teams have never been able to reach that next level. In the SEC, elite can be defined as winning the conference, which means beating Alabama and Georgia. If Sam Pittman really wants to succeed in Arkansas, his teams must one day be able to go from good to elite.

See Mike Irwin speak on the Anderson/Pittman comparison at 11:00 p.m.:

More coverage from Sam Pittman and Mike Anderson of BoAS…