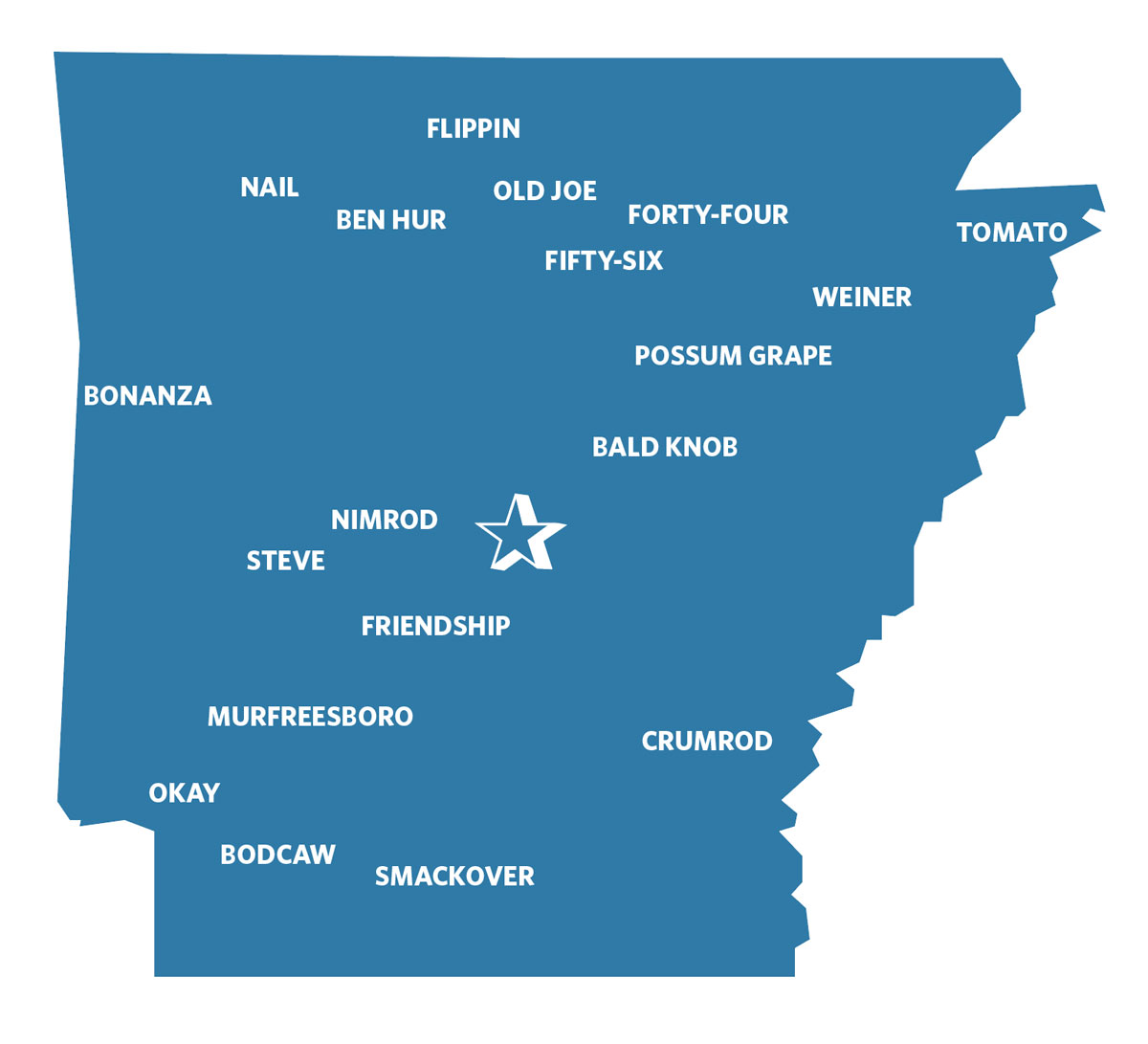 Ohis hometown is something to be proud of; her name? Maybe not so much. Quirky town names are the norm around The Natural State. What would Arkansas be without Possum Grape or Flippin? Or without Crumrod and Nimrod? (Do you think they’re related? We digress.) Arkansas city names are a quizzical bunch, and some even elicit the occasional laugh. (Weiner? Really?) Although some are no longer incorporated, we couldn’t help but take our hats off to some of the best designations in the state. Here’s to you, bald button.

This town takes its unique name from the wild grape popular in the region for making jam and wine; they’re a dark purple color, even painted on a mural in a run-down old store in town (possum also included, of course). However, the Arkansas Encyclopedia indicates that the name may have been spurred by a local disagreement in 1954 – a dispute over the town’s name “Possum” or “Grape”. I’m not sure choosing one or the other would have made a better name for the town than the two combined. Whatever the story, the unincorporated community is about 30 miles northeast of Searcy in Jackson County. Long ago, the economy was driven by the pearl industry; divers collected mussel shells from the White River and sold them to a button factory about 15 miles away in Newport. Today, most farmers live in Possum Grape and travel to nearby towns for almost all of their needs. neither does a church, liquor store, and automobile company still exist. MH

Bald Knob, this oddly named outpost in White County, was originally called Shady Grove, which sounds both inviting and mysterious like this town on the TV show “Twin Peaks.” One can’t help but think that in another era, Shady Grove would have made this list just as proudly. As for Bald Knob, it takes its name from a large stone outcrop, wrote William Leach of the White County Historical Society for the Arkansas Encyclopedia. Salt mining and quarrying have been big industries here over the years, but nothing was bigger than the strawberry industry. Bald Knob farmers sold $3.5 million worth of strawberries in 1951 (about $39 million today). Bald Knob was even called the Strawberry Capital of the World and housed a three-quarter mile strawberry shed, the longest in the world. Sounds pretty cute… but we still love Shady Grove. CG

Like these other towns, I can’t help but appreciate the names of the buildings; Weiner Post Office, Weiner Christian Church, Weiner Gymnasium and Weiner Elementary School – can you imagine being 12 in a town called Weiner? About a decade ago there was a movement to try to combine the Weiner and Delight schools into one; it was unanimously closed due to the 200-mile distance between the two, but the idea of ​​a Weiner-Delight school is hard to shake. Either way, this town of about 700 people is in Poinsett County in northeastern Arkansas. Its original name of West Prairie was old news when the railroad ran through town. The station was named Weiner after a railroad official and the town became known by the same name, although technically the town was still officially listed as West Prairie. From what I can tell online, the town doesn’t succumb to its name, so we’ll wait for inappropriate jokes for this one, but there are plenty. By the way, the school mascot is the cardinal, not the… weiner. MH

On a bend near the Mississippi River in eastern Arkansas, the now unincorporated town of Tomato had other names in its past — Canadian Reach and Cedar Landing, Mike Polston wrote for The Encyclopedia. from Arkansas. But local lore says that while filing a township request at the post office (which was also the second smallest office in the country in 1990), a local shop owner asked his daughter’s opinion for a town name. . As she held a can of tomatoes, she reportedly said, “Oh, why not just call it Tomato?” According to other traditions, the port city once had a safe box of tomatoes near the river bank for deliveries. Eventually, the captains called the Tomato stop. Due to its proximity to the river and flooding, the town’s buildings were put on log rollers and moved repeatedly. Today, only agricultural land remains. MH

Flippin is best known as the home of the Ranger Boats, but the story behind its name could be just as remarkable. It all started in the early 1800s with a settlement in the area called the Barrens, wrote Eve West for the Arkansas Encyclopedia. The general store owner, according to local legend, wasn’t happy about a peddler selling things outside his store, so he pushed him out of town with the help of a goat that kicked him in the back. The town, of course, then became known as Goatville for a time. Really. Thanks to a prominent citizen named Thomas H. Flippin, the town took the name Flippin Barrens, and in 1921 it was officially named Flippin. In all honesty, we kind of miss Goatville. CG

The significance of this Arkansas town is about as wholesome as you’d hope. According to the Encyclopedia of Arkansas, the early inhabitants decided to name this town in Hot Spring County because of the close relationships among the settlers in the area. I think that makes everything in town pretty cute; the Friendship Fire Station of Ouachita and the Friendship Baptist Church. Even the two-cell Friendship Prison, now dormant, looks like it wouldn’t be too bad a stay. But with a declining population, only around 150 residents occupy the town today. MH

In 1918, a settlement called Newcomb applied for a post office but its name was rejected, Steven Teske wrote for the Arkansas Encyclopedia. As a replacement, the name Fifty-Six—for the community’s school district number—was chosen and never changed again. Winding roads and water crossings lead to Fifty-Six in the Stone County Ozark Mountains. It is an avant-garde city with a small population of just under 200 people. You’ve probably passed this way on your way to the caves of Blanchard Springs, the nearby breathtaking cave tourist destination. The area is beautiful, with all the best The Natural State has to offer – Mirror Lake, forests, waterfalls and camping under bright, rural stars. The small town holds its place with a small country store, a church and accommodation for visitors. Numerical names must be a theme in the state; Arkansas also has the town of Forty-Four in Izard County – supposedly for the number of names on a petition to the Postal Service. MH