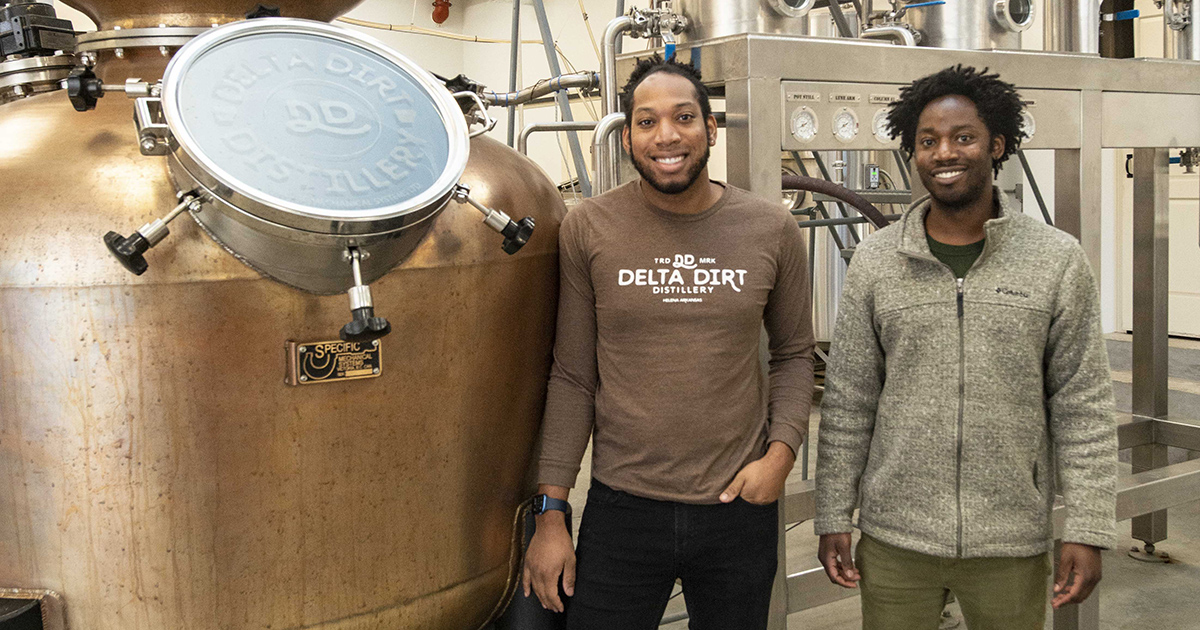 HArvey and Donna Williams and their three adult children are building on a family heritage in the Arkansas Delta. The family founded Delta Dirt Distillery in Helena-West Helena in 2017, opening its doors to the public in April of last year. The fledgling distillery will celebrate a year in business on Cherry Street with the release of its gin on Saturday April 2.

His great-grandfather, known as Papa Joe Williams, was the first to work the land. He was a sharecropper in the days before agricultural mechanization and corporate consolidation. His son shared this same land and bought the farm in 1949.

“It’s lucky we were able to keep the farm,” Williams said. “I grew up here, and there were a lot of black farmers and black land even then. Many of them have since moved north or sold their land. There are very few black farmers left in the area now. I am grateful for what we have.

Black farm ownership has indeed dropped since those days. According to a 2021 report by the Congressional Research Service, black-owned farms made up about 5.5% of American farms in 1910. By 2017, black farm ownership had fallen to 1%. A similar drop can be felt in Arkansas.

“I’m not talking about a few rows of vegetables,” Williams said. “Last year my father cultivated 80 acres of squash. At the top we reached nearly 200 acres of sweet potatoes.

Williams said he originally intended to follow in his father’s footsteps. He went to school at the University of Arkansas and earned a degree in agricultural engineering. The plan was to run the farm better than anyone before him. But then he and Donna, his high school sweetheart and then-new wife, started a family, and life took them in a completely different direction.

Williams began what would become a three-decade career in the food production industry. He started as a front-line supervisor at a turkey plant in Springdale. He then joined a major food manufacturer and gained experience in engineering, continuous improvement, capital sourcing and other corporate functions. At one time, Williams was the general manager of a corn dog factory in Haltom City, Texas.

Despite its success, it was hard to resist the sweet nostalgia for home. His and Donna’s parents were back in Arkansas, as was the family farm.

“I always wanted to go home,” Williams said. “So I was able to get a job running a chip factory in Newport. This allowed us to return to Arkansas.

Settling in Jonesboro and commuting to Newport for work, Williams continued to think about his family’s farm. He needed a way to get involved again, but not necessarily in day-to-day farming operations. It was then that the idea of ​​the distillery was born.

A few years ago, Williams’ brother, Kennard Williams, attended a farmers’ meeting where they demonstrated their products and methods. It was there that he discovered vodka made from sweet potatoes, which gave him the idea for Delta Dirt. He shared his findings with his brother, and the family decided to go all out. The family’s youngest son, Thomas, was sent to distilling school and briefly starred on the Discovery Channel’s “Master Distiller.” With a skilled spirits maker in the fold, they turned to recipes.

Using the family farm’s flagship crop, sweet potatoes, was a way to differentiate Delta Dirt from other distillers in the area. Tubers, however, are particularly difficult to work with.

“Sweet potatoes are a hearty vegetable with a unique profile,” Williams said. “The sugar extraction process is very difficult. But once you have the sugar, you’re home free.

A University of Florida professor helped Delta Dirt determine the right mix of enzymes, temperatures and other factors to maximize sugar extraction and increase sweet potato yield. The fledgling distillery began to figure things out.

“My two sons understand the process and find ways to improve it,” Harvey Williams said. Eldest son Donavan moved from Chicago shortly after the distillery opened to the public. Both sons recently petitioned the state to promote the Delta Dirt brand.

The family’s daughter, TaHara Williams, is in the Navy and currently stationed in Norfolk, Virginia. She helped put together the drinks menu for the distillery’s tasting room, so she’s involved, even if she’s far away and focused on her own career.

The distillery’s flagship offering is sweet blend vodka. It is distilled from sweet potatoes and corn, both grown on the family farm. Two bourbons – one made with sweet potatoes and one without – will come in time. And a gin is planned for release during the upcoming anniversary festivities.

Williams said the plan was to focus on slow, cautious growth at first. They started out self-distributing, but circumstances quickly changed that.

Delta Dirt built up a significant inventory in preparation for last year’s King Biscuit Blues Festival. When the festival was canceled due to pandemic concerns, the family found themselves sitting on a large stockpile of spirits.

According to her husband, it was Donna Williams who was the catalyst for the action. She thought the situation called for an accelerated distribution plan. They struck a deal with Southern Glazer’s, and now Delta Dirt spirits can be found throughout Arkansas.

Helen is at home

Although he and his siblings attended school in nearby Marianna, they always felt a special connection to Helena. To them, Helena was the big city, a place to shop and people watch. They all loved their time there as children and young adults.

Helena’s decline has been well documented over the years. Businesses closed and the population was slowly depleted. Williams hopes Delta Dirt can play a role in reviving the once-thriving port city.

“People here are slowly recognizing that we’re building something special here,” he said. “With economic conditions declining and people migrating from Helena to places like Conway, Jonesboro and northwest Arkansas, I think they’re starting to see that we can have the same kind of things here. in Helena, right here on Cherry Street like back in our prime.

And often it’s the foreigners who help the locals see the possibilities.

“Last week we had three people who said they saw our sign on the freeway and decided to stop for a visit,” Williams said. “They come from everywhere.”

Williams said Delta Dirt is working on a more comprehensive distribution strategy to branch out into other states. One day he would like to see Delta Dirt in stores as far away as Atlanta.

Here in Arkansas, the brewers get a lot of the publicity. But distilleries are starting to catch up in numbers and attention.

“Until recently there was only one guy who was doing spirits on a substantial level, and that’s Phil [Brandon] in Rock Town,” Williams said. “Now there are a handful of distilleries in the state. There are hot springs [Distilling]Fox Trail in Rogers, Postmaster in Newport, and us here in Helena.

Today there are a dozen distilleries actively producing spirits in Arkansas. A distillers’ guild was organized last year, and Williams said he’s excited to see the progress the group can make on issues like e-commerce. He would like to be able to ship his product directly to people across the country, but that is not possible in today’s legal environment.

For now, Williams said, he’s having fun and enjoying running a business with his family. It’s not the path he originally envisioned, but in the end he achieves the goal he had in mind from the start.

“It wasn’t like I wanted to be a distiller one day,” Williams said. “But I always wanted to do something with this farm. And it can save the farm like my dad saved the farm in the 80s.”