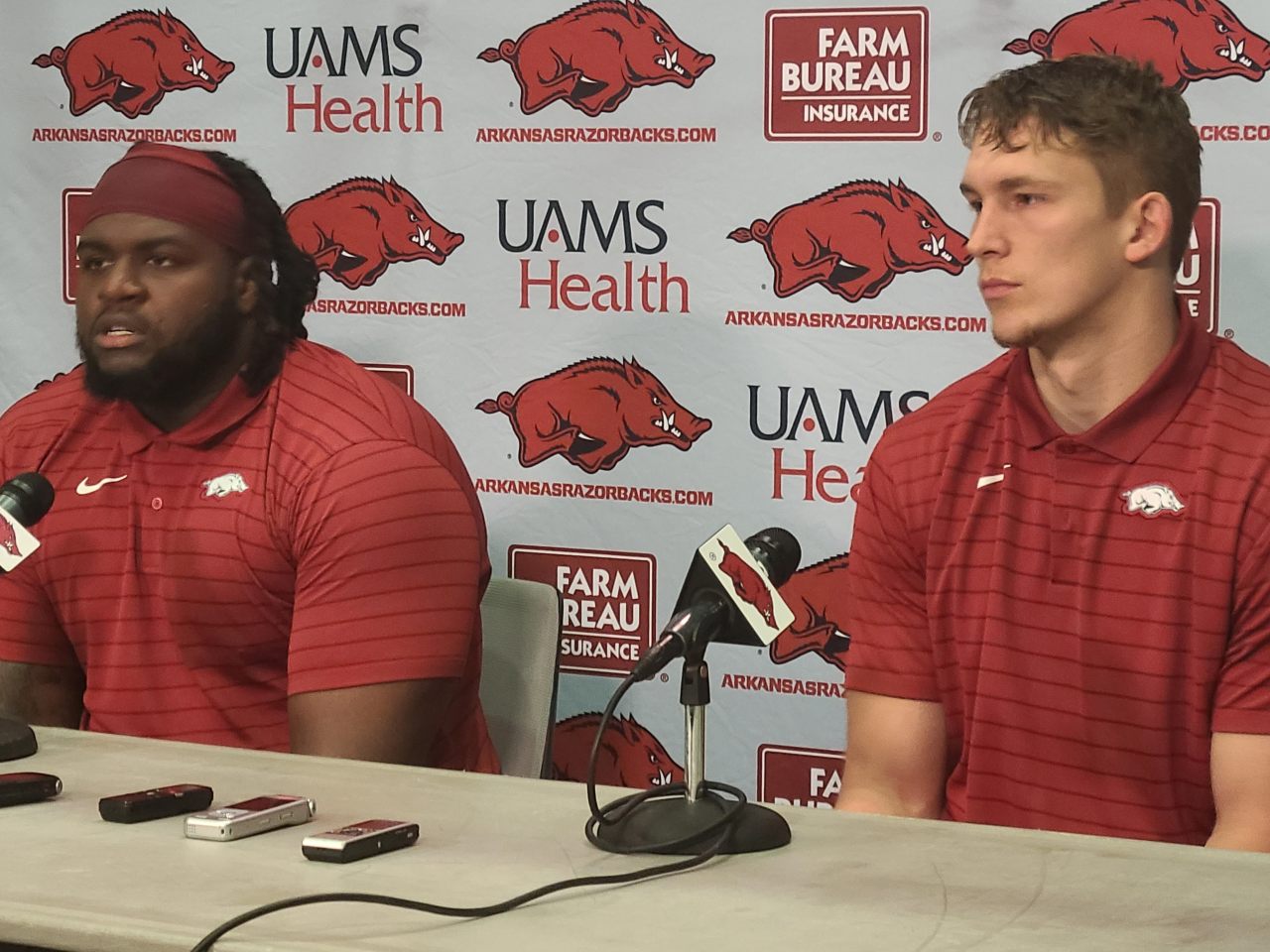 FAYETTEVILLE — Arkansas’ defense lost some key players last season, but they also have several ready to fill those positions.

Among them are redshirt junior Taurean Carter and Alabama transfer junior linebacker Drew Sanders. Carter has drawn praise all spring from Sam Pittman while Sanders is one of the hopefuls to replace Grant Morgan and Hayden Henry. Carter talked about how he thinks his fall camp is going after practice Thursday.

“Me personally, I feel like it’s going pretty well,” Carter said. “I mean, it’s just a big old competition in the room. We push each other left and right. You cannot take a day off. If you take a day off, you’re beaten. So we hold each other around the room at a high level, and we know that every time we watch a movie, we know you have to put a good quality on the movie or we’re gonna have you in the room. movie theater.

Carter played in all 13 games last fall. He finished with 24 tackles, including six solo, three for loss, a sack and a pass breakup. Carter plays for another defensive line coach in Deke Adams, but it makes him happy and credits him with some of his improvement.

“Man, that’s been a huge blessing. I really, really like it,” Carter said. “I think he’s one of my favorite D-line coaches besides (Derrick) LeBlanc. I really like. I like the way he teaches me the technique because that’s where I loosen up. I’m more of a natural guy who plays. And he teaches me to be disciplined and the little things and the technical part of the game that I never had before. And implementing it in my game, I feel like it gives me a lot of improvement on the pitch.

Carter named a positive of having a different defensive line coach each season.

“Oh yes sir, most definitely,” Carter said. “Every coach who has been in coaching has their own profession. It’s a bit like a puzzle piece. You take a little here, take a little there. You assemble it. This is the positive side. »

For former Denton (Texas) Ryan five-star recruit Sanders, he explained why he chose Arkansas over Texas and Oklahoma when he chose to leave Alabama.

“I mean I just knew what I was looking for,” Sanders said. “I knew I wanted to be a little closer to home. A big problem was staying in the SEC too. Arkansas was first on my list. This is the place I wanted to visit. I kind of wanted to make that transition between playing with my hand on the floor and standing up a bit. I thought I could fit into the program they run, so they were first on my list.

Gone are Morgan (101 tackles) and Henry (100) who were a lot of production although Bumper Pool is back after picking up 125 tackles in 2021. Did the departure of Morgan and Henry also play a role in your decision?

“Just like I said before, it’s kind of like knowing the pattern playing against him and seeing how they play,” Sanders said. “Obviously doing as many games as them was an attractive thing. But it was like seeing myself fit into a program like this and I felt like that was the place. where I needed to be.

Pool is someone Sanders said he leaned on at times for information.

“He helped me tremendously,” Sanders said. “Every day we kind of focus on watching a movie and it kind of tells me what to do. I was really excited to find myself with a player like him with as much experience as him and to learn from him.

At Alabama, Sanders suffered injuries multiple times, but in 2021 he finished with 24 tackles, 12 solo, 2.5 for loss, one sack, two pass breakups and four quarterback rushes. He talked about what he thinks are the things he needs to work on the most.

“I mean moving to a whole different position, you have a bunch of things you need to change,” Sanders said. “It’s a whole different style of play. You go from reading part of the ball to reading the whole pitch now. And it’s really nice of all the aspects you need to improve. You don’t come here playing something you’ve played before. It’s brand new. You kind of have to work on everything a little bit as much as you can.

Sanders is also impressed with redshirt freshman Chris “Pooh” Paul who is currently sidelined with a concussion he suffered in Saturday’s scrimmage.

“Pooh is a great player,” Sanders said. “He did his thing. He was also a great person to watch and learn from. He has huge ability and I think we’re really deep in that position. We have a lot of great players there. With all the young kids that have come in, it gives us a lot of depth. I think if God forbid someone falls, we’ll be fine.

One of the younger linebackers who caught Sanders’ eye is Jordan Crook. He’s a real freshman from Duncanville, Texas, who signed up halfway through.

“He played really well,” Sanders said. “He is very fast downhill. He is really aggressive. His mind is much more mature than a normal freshman. He is fun to watch. He plays a lot of games and does good things.

Carter also stepped in on Crook.

Arkansas will practice again Saturday morning. The open to the public scrum is Saturday, September 16 at 11 a.m.