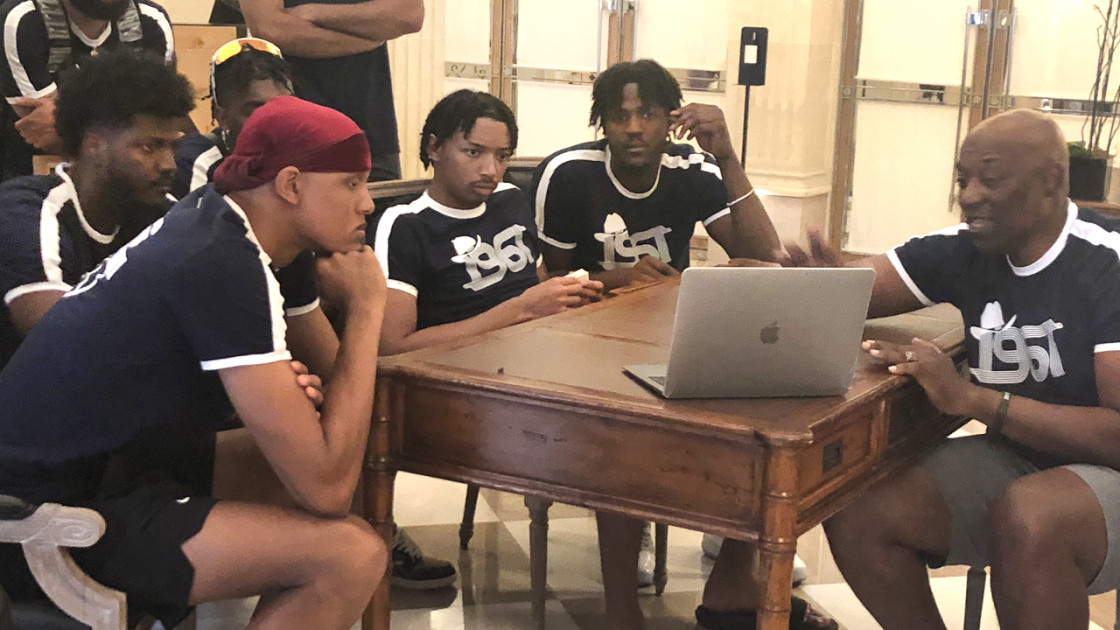 Arkansas won their opener on their road trip with a convincing 108-59 decision in Valencia on Tuesday night.

On Wednesday morning, the group had lunch, packed their bags and started their march to Barcelona. The nearly four hour trip northeast along the coast presented some phenomenal scenery which made the trip a bit shorter.

While some admired the view, overall there were two distinct groups on the two buses.

One group used the ride for sleeping, as many are still adjusting to the seven-hour jet lag. As we left at 11 a.m., it was still 4 a.m. back in Fayetteville.

The second group consisted of the coaches, staff and GAs breaking down the previous night’s win and compiling numerous graphs and reports. As coach Eric Musselman said last night, the team did some things well, but there were many teachable moments.

The buses arrived in the heart of Barcelona around 4pm and the team had free time to explore this thriving and dynamic city before a team meeting at 7pm.

Then assistant coach Keith Smart took the players out of his ‘pod’ to show some of those positives and negatives to help them improve ahead of Thursday’s second game at Barcelona.

Gameday Thursday, just like gameday Tuesday, will still have its share of fun with a guided tour of Barcelona, ​​including several of the venues from the 1992 Olympics. The team will return to the hotel for the pre-match meal and lockdown for Game 2, scheduled for 8:30 p.m./1:30 p.m. CT.

Some revealing moments in Spain:
MAKHI MITCHELL (on the ground): The atmosphere and speed of the game are very different. The footwork (of the Europeans) is incredible and their passing is incredible.
MAKHEL MITCHELL (off the pitch): First, the food is very different and the number of drink choices is limited. Also, the drink portions are smaller, there is less ice, and most of the time there are no refills. I also enjoyed the beach and how the people are always outdoors, active and enjoying what they are doing.

What did you learn after watching the film:
Makhi Mitchell: We can do much better. There is always a way to improve. We just have to keep taking things day by day and incorporate all the things we learn from those games when we get back to training.
Makhel Mitchell: Cinema is so precious. He doesn’t lie and you can learn from your mistakes. We didn’t watch a lot of movies at our previous school, so it’s great to have coaches working with us. I am excited to improve individually and as a team.

First impressions of Barcelona:
Makhi Mitchell: There were plenty of restaurants near our hotel in Valencia, but they mainly served local dishes. I think I lost a few pounds there. Barcelona is very different. It’s much more of an American city, a bit like New York. So our first meal in Barcelona was Five Guys and I think I got those pounds back in one meal.
Makhel Mitchell: We also walked around the city. There are all the major designer boutiques, like those in Beverly Hills, right outside our hotel. There is a constant flow of people and the traffic is very active. But above all, we can’t wait to play again tomorrow.