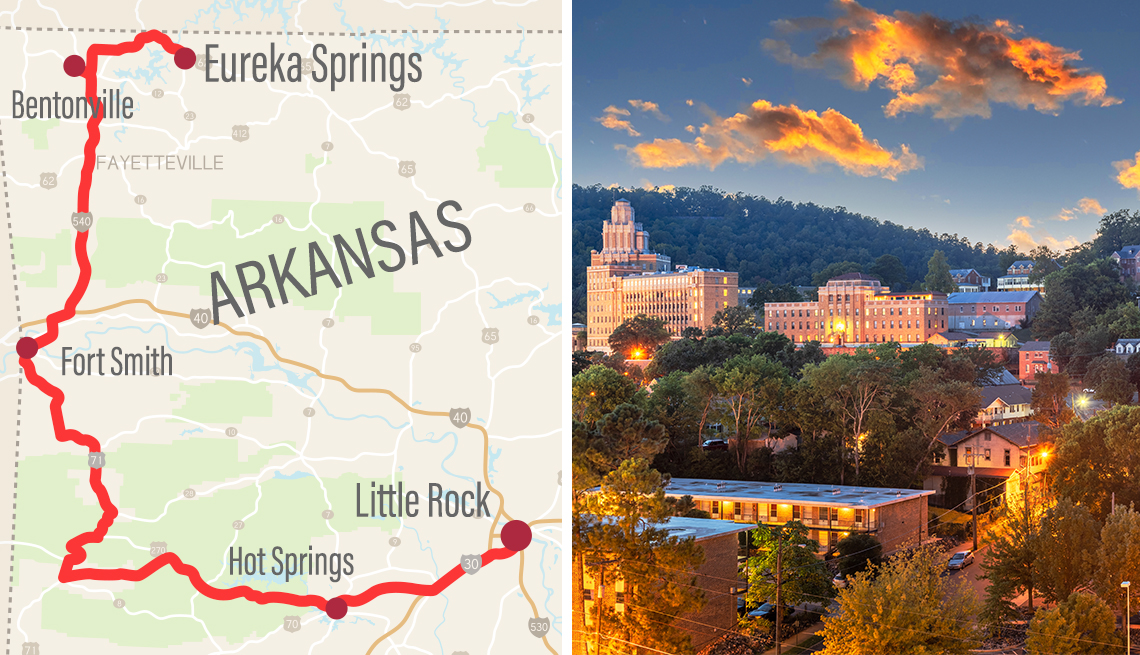 Leave town on US Route 270, skirting Lake Ouachita, until it meets US Route 88, aka the Talimena Scenic Byway. The road winds through the mountains with oaks and maples that take on vivid hues of orange, red and yellow in the fall. At scenic vantage points, snap photos and listen to the symphony of cicadas and the hum of passing boats on the Ouachita River, popular with anglers for its bass, sea bream and white perch.

About 30 miles before the Oklahoma border, take US Highway 71 north to Fort Smith, an old frontier town on the Arkansas River in the valley separating the Ouachitas from the Ozarks. The namesake fort was established in 1817 as a buffer between the Cherokee and Osage tribes. Confederate troops occupied it during the Civil War, and it later served as the federal courthouse. Today the Fort Smith National Historic Site includes a reconstruction of the gallows used by the Federal Court, the 1838 Commissioner’s Building, and the foundation of the first Fort Smith.

At Chaffee Barber Shop Museum, flashback to a 1958 event seen around the world: here Elvis Presley had his buzz cut for his military duty. You can see actual video of TV news coverage from that day in the museum.

​There is much more to see around ﻿For﻿t Smith, including over 30 eye-catching murals by famous international public artists such as D*Face and Okuda San Miguel. Pick up a map of the artwork at the downtown visitor center (formerly a brothel in the city’s rowdiest times).

The Belle Grove Historic District, just north of downtown, has more than 20 Victorian-style homes, most dating from the late 1800s. You can visit a handful, including the Italian-style Clayton House, with ornate coal fireplaces and period furnishings.

​Where to stay: The moderately priced, 138-room Courtyard by Marriott Fort Smith Downtown is close to local sights and attractions. Its accessible rooms have roll-in showers and lights that alert the hearing impaired to knocks on the door.