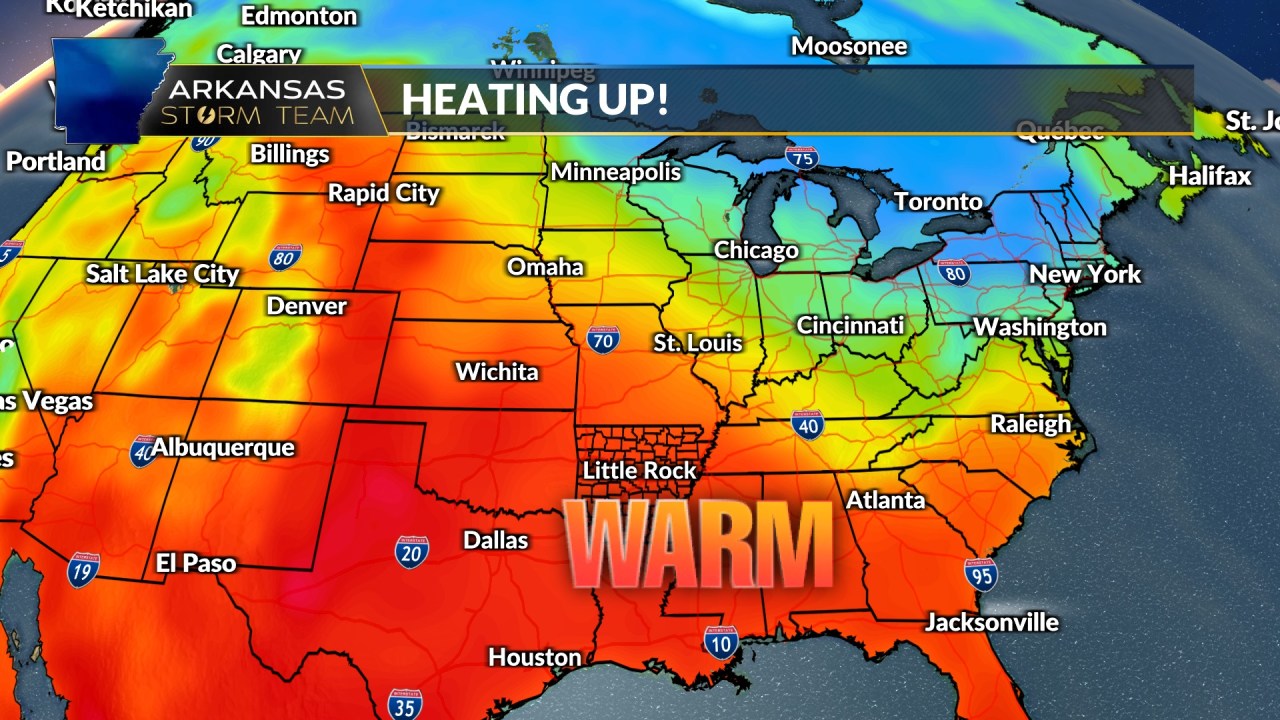 HEATING: Here’s when Arkansas will see 80°!

LITTLE ROCK, Ark. – Despite the cold forecast for Wednesday and Thursday, there are warmer days around the corner! We are now entering the spring months where temperatures in the 70s and 80s are much more common.

You will start to feel the warmer temperatures this weekend. Mostly sunny skies and temperatures in the upper 60s on Saturday and mid 70s on Sunday will make for a great weekend to get out!

The weekend is just the beginning. An area of ​​high pressure will slide eastward and clockwise winds around it will blow warm air from the south. There will also be a broad area of ​​low pressure moving from the west. The counter-clockwise winds around this storm will also help bring this warm air in! The hottest days will be Sunday through Tuesday.

Usually when we talk about a forecast more than 5 days into the future there is some uncertainty with the forecast, but this time all the arrows are pointing to a big warm up. We can take a look at a few different forecast models at different levels of the atmosphere to see how warm the air will be and where the warmest air will be.

The orange tint is where the atmosphere is thicker and the blue/green is where it is thinner. Both forecasts agree that temperatures will be warmer than average for much of the central United States. On the left, the US model predicts that warmer temperatures will spread slightly further north than the European model. What’s important for Arkansas is that they’re both showing a big warm-up.

As you can see, the two forecasts are almost identical. That means temperatures in the 80s on Monday are almost a certainty.

Temperatures that hot aren’t that abnormal, and it won’t even be our first 80s of the year. We have already recorded three days in the 80s for March. March 2, 3 and 6 were all in the 80s. On the 6th the temperature reached 82° and that night we saw 8 tornadoes in the wild.

It’s still too early to say it will happen again, but a storm is expected to roll in next Wednesday.

This is something the Arkansas Storm team will be keeping an eye on, but there are no severe weather concerns yet.

Keep getting your latest weather information from the Arkansas Storm Team!

To make sure you stay up to date with forecasts, download the Arkansas Storm Team app to get updates anywhere, anytime.

To watch the latest Arkansas Storm team video updates, you can check them out here.

The Arkansas Storm Team is a collaboration of two stations to bring you the largest weather team in the state when covering Arkansas weather.