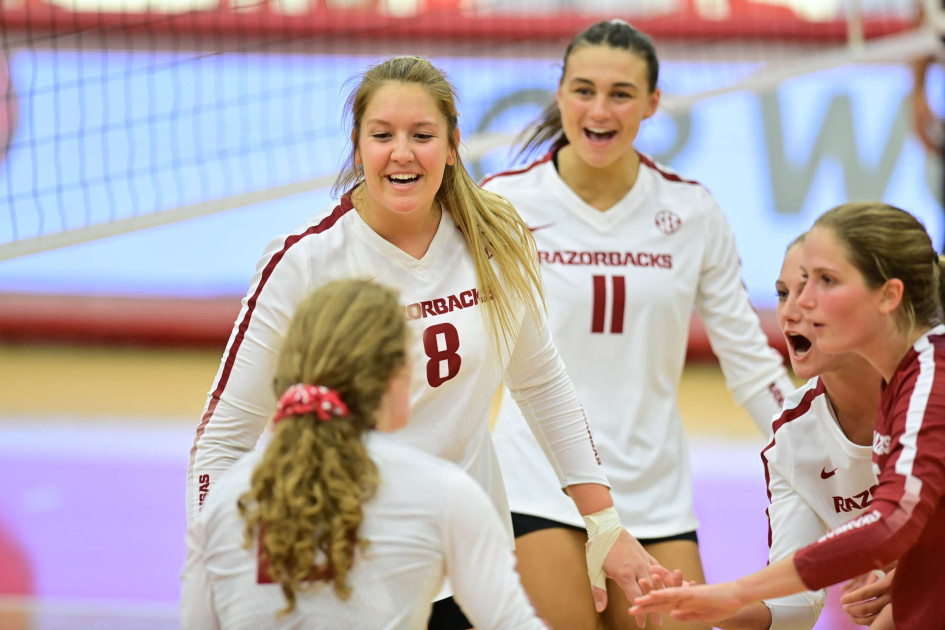 Hogs and ‘Dogs Up Next for Arkansas Volleyball

The Razorbacks hit the road for their first SEC series of the season with a pair of games against Mississippi State in Starkville this weekend.

The No. 23 Hogs face the Bulldogs Saturday at 11 a.m. and Sunday at 1:30 p.m. These are the first consecutive SEC games for each team this season, and both are 1-1 in conference play.

Mississippi State is currently 8-4 overall to Arkansas 10-2. The Razorbacks were chosen to finish fourth in the SEC, with Mississippi State just behind in fifth. In last year’s series, the Bulldogs defeated the Hogs twice, both games 3-1.

Saturday’s game will be broadcast live on SEC Network Plus, and Sunday’s final will be Arkansas’ first nationally televised game of the season, airing on ESPNU.

Last outing
Arkansas opened SEC play last week and split its first two games with a 3-2 loss at LSU and a 3-1 win over Ole Miss at Barnhill Arena. Senior outside hitter Jill Gillen bolstered the offense in both games with 40 combined kills and a .330 hit percentage, and also contributed seven blocks. Graduated middle tackle Tatum Shipes led the team defense with 15 blocks, and his eight in the game against Ole Miss is a new season high.