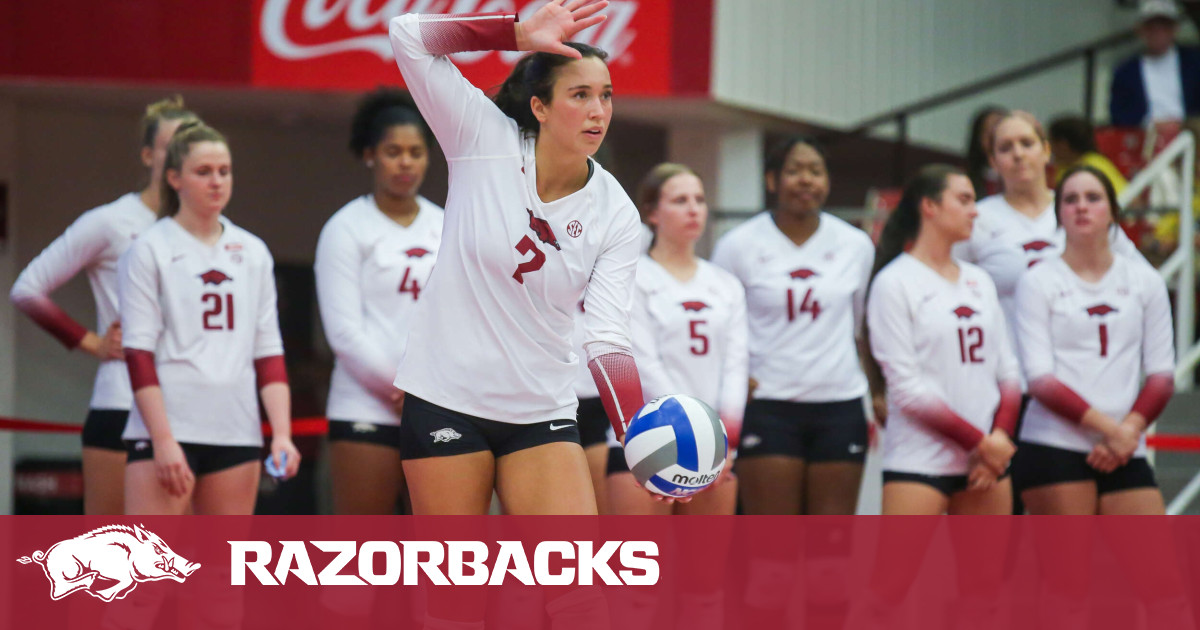 Hogs fight back, but fall in five to Wildcats

Trailing 2-1 in the game, the Razorbacks answered the call and tied Saturday’s series finale against the No. 19 Wildcats at two sets apiece, but the visiting team prevailed and won the deciding set 15 -12 for a 3-2 win.

The Hogs go 11-5 overall and 2-4 in conference, while the Cats are 10-5, 5-1. Arkansas is now 11-4 this season and 2-3 in the SEC. Kentucky moves to 8-5 and is 4-1 in the league. Arkansas and Kentucky have now gone to five sets in three of the last four outings between the two, and the last two have been decided by no more than three runs.

Junior Taylor Head led the Razorbacks offensive effort with a career-high 23 kills and a team-high 12 digs for a double-double and hit .395. She also had two service aces in the match, which included the deciding set point in the opening frame.

For the third straight game, the Hogs posted double-digit blocks with 11, which is their ninth double-digit blocking performance of the season. Graduate midfielder Tatum Shipes had five total with one solo block and four block assists, and also contributed a season-high nine kills to boost the Arkansas offense. Seniors Jill Gillen and Maggie Cartwright also joined Shipes with solo blocks on the night.

Set 1
Kentucky quickly took control in the first set and held a lead almost until the halfway point. A pair of wins from Shipes put the Hogs ahead 13-11, and two from Hailey Dirrigl made Arkansas 15-13 at the media break. The Cats were never far behind, however, and the score was tied five more times after that until the 20th point. Two kills from Head restored Arkansas to the lead and Kentucky called time. The Wildcats responded with a pair of runs to push him to set point, and the Razorbacks regrouped with a timeout. It was a back and forth battle from there, and the score was tied at 25, 26, 27, 28 and 29, all before the Hogs could string together Head’s consecutive points. in the form of a kill and an ace for the 31-29 set win.

Set 2
The Cats grabbed the first run in the second set and didn’t give up the lead for the rest of the inning. The Hogs closed the gap to one at one point, but didn’t generate a long enough run to pull away from Kentucky. The team tried to regroup with two timeouts, the last trailing 23-17. The Razorbacks nailed four runs from there and another on Kentucky’s timeout, but a kill for the Cats ended the second 25-22 and tied the game at one apiece.

Set 3
The Hogs used a three-point streak in the third and took a 6-4 lead, but that was short-lived as the Wildcats fought back with a 6-1 streak and reached 10 points first. The Razorbacks then played from behind and Kentucky extended their lead to 18-14. Arkansas took a timeout, but didn’t cut the deficit to less than two. A kill and an offensive error closed the set 25-21 in favor of the Wildcats for a 2-1 lead at Kentucky.

Set 4
Some early errors from Wildcat helped the Hogs gain an advantage to start, and while the away team tied it five times, a three-point run from Razorback with a kill from Head and two errors from attack made it 12-9 in favor of the Hogs. Kentucky took a timeout and while the Wildcats snuffed out runs from Arkansas, they didn’t have any and the Hogs continued to hold the lead. Back-to-back attacks from Dirrigl and Head extended the advantage to four at 21-17, and the Wildcats regrouped again. An offensive error sent Arkansas to set point, which Kentucky botched four times. After a timeout, the Cats added one more point, but Cartwright closed the door with a kill at 25-21 and forced a fifth set.

Set 5
The deciding set was close and the Hogs tied the game three times but never led the first eight points. Switching sides, Arkansas gathered momentum and took an 11-10 lead on a kill from Dirrigl, and back to 12-11 with one from Cartwright. The Wildcats then settled in and took a 13-12 lead, which caused Arkansas to time out. The Hogs didn’t score at the break, however, and a late Kentucky kill made the Wildcats 15-12 for the 3-2 victory.

Next
Arkansas continues a five-game homestand next weekend as the Hogs host the Tennessee Flights on Friday, October 14 and Saturday, October 15. The first serve of the opening match is set at 7 p.m. and the final is at 5 p.m. Both matches will be broadcast live on SEC Network Plus.