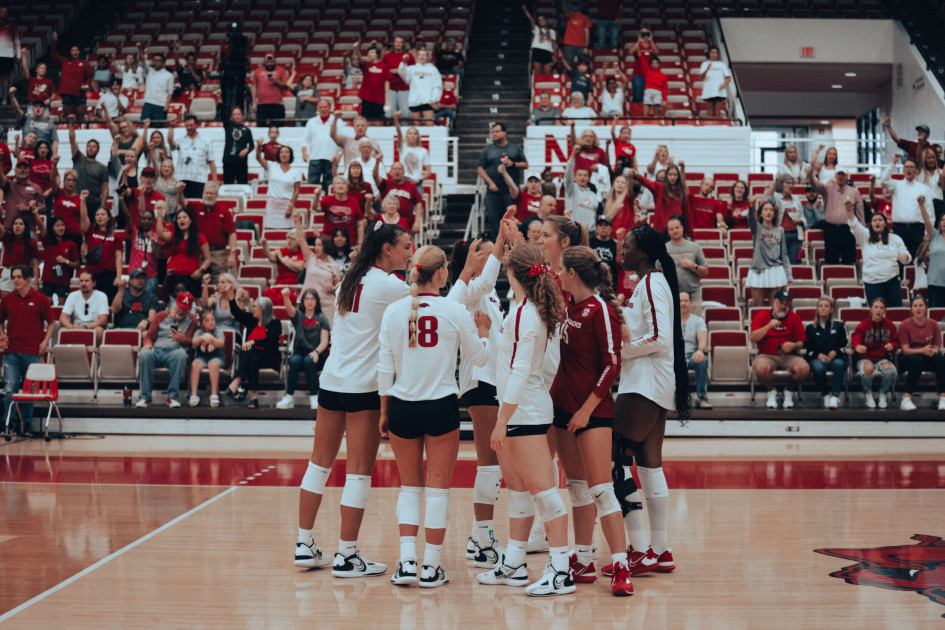 Not only did Arkansas earn its second sweep in as many days with a win over Alabama State on Friday, but the Hogs set a new record and saw college debuts along the way.

The Razorbacks hit .536 as a team in the game, the first time Arkansas has hit over .500 as a team in one game and a new program record. Six Hogs hit over .500 on the night, which included new career highs for seniors Jill Gillen (.714) and Maggie Cartwright (.692). Gillen had a team-best 11 kills on 14 swings, and Cartwright came in second with nine kills on 13 attempts without any errors. No Razorback has recorded more than one error in the game.

Three Hogs also touched down for the first time on Friday night, with sophomores Zoi Evans, Jada Lawson and Rosana Hicks all spinning for Arkansas. Evans had three kills on five error-free swings for a .600 hitting percentage and recorded one solo block and two assists. Lawson had two kills on five swings and Hicks contributed a block assist to Arkansas’ total six.

Set 1
The game started tight between the two teams, until a four-point series with two kills from Hailey Dirrigl and one from Taylor Head gave the Hogs a four-point lead at 11-7. Alabama State called time, but Arkansas continued to extend its lead off the break and another four-point tear put the Hogs up 19-9. The Lady Hornets went three on another timeout, but the run was snuffed out by a kill and an ace from junior Taylor Head. Alabama State salvaged a point, but the Razorbacks responded with kills from Cartwright and sophomore ace Courtney Jackson for the 25-13 victory.

Set 2
Arkansas wasted no time in the second set and quickly chained five unanswered points, including two kills and an ace from sophomore setter Hannah Hogue, which prompted a huddle in the state of Alabama. The Hogs allowed Lady Hornet just two runs after that and added five more for a 10-2 lead. Three straight wins from Cartwright, Dirrigl and Gillen and two offensive errors from Alabama State then extended the lead to 12 and forced another Lady Hornet timeout at 15-3. An ace from graduate setter Gracie Ryan, a pair of wins from Dirrigl and one from Gillen and graduate middle blocker Tatum Shipes contributed to a 5-3 run at Arkansas that pushed the Hogs to more than 20 points. Evans’ first collegiate kill took the lead to eight, and Alabama State hit double digits with one kill, but the Razorbacks responded with two from Shipes and Head and won set two 25-10.

Set 3
The third and deciding set began with an Arkansas first as Jada Lawson made her Razorback debut and drilled the first kill for the Hogs. Alabama State tied, but Arkansas had six straight points with two kills each from Cartwright and Gillen and two aces from Jackson for a 7-1 advantage. Alabama State cut the lead to four on a timeout, but Arkansas moved up seven points to 13-6 thanks to an ace from Shipes. The Lady Hornets then went on a 5-1 run, which included four unanswered runs, and edged the Hogs 14-11. A Cartwright kill and two Alabama State offensive errors cut the lead to six, and the Hogs led by at least five from that point on. A kill from Gillen put Arkansas over 20, and four straight points, including kills from Shipes and Lawson, closed the third 25-15 for Arkansas and for the game sweep.

Next
Arkansas wraps up the tournament in Colorado on Saturday with a game against Gulf Coast Florida at noon. Live stats will be provided by Colorado State University.

Match Prediction: No. 23 Cincinnati Bearcats vs. No. 19 Arkansas Razorbacks