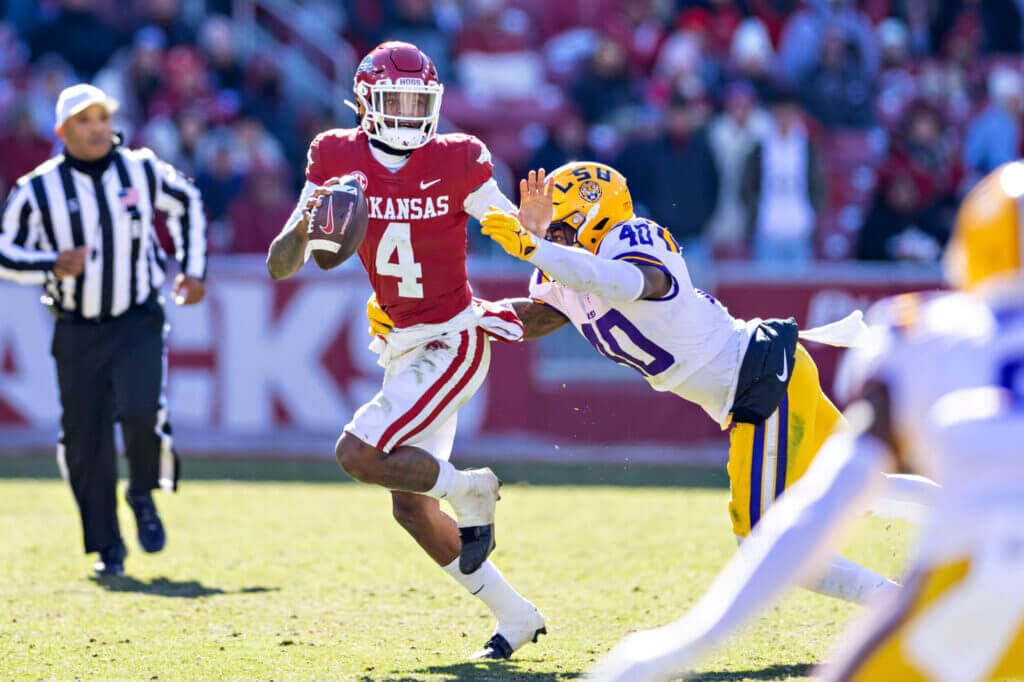 FAYETTEVILLE, Ark. – As LSU walked into its team meeting Saturday morning, Harold Perkins Jr. was busy throwing up. The 18-year-old had the flu.

His teammates asked him if he would be okay with playing in Arkansas soon, and he simply replied, “Yeah, I had to get rid of that food.”

“Then he just ate grapes like nothing happened,” said defensive end BJ Ojulari, who was stunned.

Little did the Tigers know the true freshman phenom was about to earn them a game that would help them earn a spot in the SEC title game, made official with Alabama’s victory later Saturday. at Ole Miss. Little did they know that Perkins would give one of the best individual defensive performances that many remember watching, the kind that teammates said they were “shocked.” But the one thing they knew? “We already knew who Perk was,” Ojulari said.

No. 7 LSU (8-2, 6-1 SEC) beat Arkansas 13-10 in a cold, ugly outing that will ultimately be remembered as the Harold Perkins game. Or maybe the Perkins Flu Game. There’s a lot to dissect about LSU’s offensive struggles and how the Tigers won SEC West, but it’s about Perkins’ eight tackles, four sacks, a pass breakup and two forced fumbles, including the one to win the game.

• Malik Hornsby is fast. Really fast. His Arkansas teammates constantly call him the fastest player on the team, and he was named the fastest quarterback in college football by some local media. So when Hornsby starts running with a head start, watch out.

But Perkins is also fast, which is absurd for a 220-pound linebacker who can also blast run plays down the line. And on third down near midfield in the second quarter, Hornsby had a gap of about 3 yards to Perkins when he took off. Perkins, head down and arms swinging, sprinted and caught up completely in maybe five strides.

He lunged at Hornsby from behind and swung his arm through the ball, forcing him out for a fumble which LSU recovered.

• For the second week in a row, LSU used Perkins as a QB spy. LSU realized over the past month that it needed to have Perkins on the field, and against mobile quarterbacks, the best use of it has been to play him in a hybrid defensive linebacker-back role, often dropping him in coverage but grabbing the quarterback. If the quarterback stays in the pocket, Perkins can sometimes throw a blitz (often called a Red Dog Blitz). If the quarterback runs off, Perkins is there to follow him with his sideline-to-sideline speed.

Perkins’ role proved one of the keys to LSU’s victory the previous week against Alabama. He wreaked havoc on quarterback Bryce Young as the gifted jammer couldn’t relax. Against Arkansas, it was 10 this time. That was always going to be the game plan for Arkansas, considering the Razorbacks live and die by 240-pound quarterback KJ Jefferson, but Jefferson didn’t play. . That made this game plan even more daunting, as Hornsby wasn’t much of a threat to beat LSU in the air.

• LSU only led 6-3 at halftime as the offense couldn’t break through. It started to get dangerous for LSU as Arkansas moved into midfield to start the second half. On second and 10, Perkins lined up to cover the slot receiver. Instead, he jumped off the edge. Only a tight end on the other side of the line running over him could even attempt to block him. But Perkins remained intact to set up third and 18th.

Perkins returned to spy on Hornsby. This time Hornsby stayed in the pocket a bit longer, so Perkins remained patient. But when Hornsby cut the line and tried to sprint again, you can guess what happened. Even further than the first sack, and this time with linemen obstructing his path, Perkins picked a line, took off and grabbed Hornsby from behind for his third sack of the day.

• Perkins is not a finished product. Coach Brian Kelly was quick to publicly note that Perkins still isn’t ready to do it all, and there are reasons why he’s being asked to play simple roles like QB spy that allow him to attack and make plays. Kelly is the first to give him credit, but there’s still a long way to go.

Take the pass cover. He’s good at covering for his man, but knowing the right assignment and gap hasn’t always been easy for him. This was also true in the racing game.

“There were times earlier in the year when he was just closing a gap and you had big runs,” Kelly said. “He’s so much more aware of the gap.”

So on the first drive of the fourth quarter, Perkins came back into the coverage area. Arkansas quarterback Cade Fortin, who entered the game in the second half, dropped the ball for a short pass near the line. Perkins stayed in his area, then attacked the ball carrier and stopped him for a 1-yard gain.

“His ability to reduce coverage, we saw that today,” Kelly said. “Be in the right place and spread the blame.”

The Mayor of Fayetteville pic.twitter.com/qnpOqR85ti

• Then the game got really good. After a 40-yard touchdown pass by Fortin — thrown while Perkins was laying Fortin down, by the way — Arkansas trailed by just three in the fourth quarter. Again, there was little LSU offense could do, and after a failed fourth attempt by the Tigers, Arkansas had the ball in LSU territory. This set up the third and the 10.

And Perkins got to show off his moves again.

He wasn’t spying on QB this time. He’s part of LSU’s third-pass rush unit, and he rushed along the left edge. Perkins lowered his body, dropped his shoulder low, low, low to the ground and rounded the edge around the right tackle untouched. He blew up Fortin’s pass attempt, forcing Arkansas to punt.

• But LSU still couldn’t put it away. Arkansas got the ball back two minutes from time, got a first down, and only needed one or two big plays to get into field goal range and potentially even the score.

So with 1:27 to go, LSU sent Perkins rushing down that same left edge. And he did that same dipping motion. But this time the right tackle got a hold of him, potentially giving Fortin just enough time to throw.

But Perkins reached out with his left arm as Fortin leaned back, and his hand knocked the ball down. LSU picked up the fumble.

And you could say that with that last one-armed stretch, Perkins single-handedly won the game for LSU.

• The first to jump on Perkins after most of these games, including the winner? It’s almost always Ojulari, a projected first-round pick in the NFL Draft and one of the nation’s top passers. When Ojulari talks about Perkins, he becomes giddy.

“I’m at a loss for words,” Ojulari said. “The things he does, his ability to play, you can’t teach that. It’s just in him. He’s got that fire. He’s got that spark. And we feed off of him as a defence. I’m always shocked.

• Perkins proved he was a star from day one at LSU. He was a top 10 prospect overall, according to the 247Sports Composite, of Cypress, Texas, who LSU surprisingly knocked out of Texas A&M. He immediately won over Kelly and the staff members with his speed and drive, but still took a while to earn plenty of snaps.

He started to make a name for himself during limited stints against Mississippi State and New Mexico. He had a key interception and some big plays in a nasty win at Auburn. And the fan base crumbled when LSU didn’t play it much against Tennessee’s streak pattern in a 40-13 loss.

Kelly then clarified that Perkins was too talented not to be on the court. Against Ole Miss, who plays a similar pattern at Tennessee that forces opponents to play with five to six defensive backs, LSU basically benched Ojulari in early downs because he realized he needed Perkins on the court, even if it meant sitting down his best passer. And from there, LSU shut down Ole Miss’ high-powered offense.

Perkins has been a legitimate starter for LSU for three games, coinciding with LSU’s rise to prominence as an SEC contender and now SEC West champion. The Tigers stopped Ole Miss and held Alabama to nine points in three quarters. Then on Saturday, the Razorbacks only scored 10. It would be foolish not to realize that LSU’s defense peaked as Perkins played more snaps.

“I don’t think there are enough superlatives to talk about this young man as a true freshman coming his way,” Kelly said.

As he is still so young. He will be asked to do more as his career progresses. Its impact, already so powerful, will only grow.

• And he did all this while he was sick. Kelly went to Perkins and playfully reminded him of Michael Jordan’s legendary “Flu Game,” when Jordan scored 38 points in the 1997 NBA Finals while sick.

“Hey, you know MJ threw up before he had his biggest game ever,” Kelly said.

Perkins replied, “Who is MJ?”