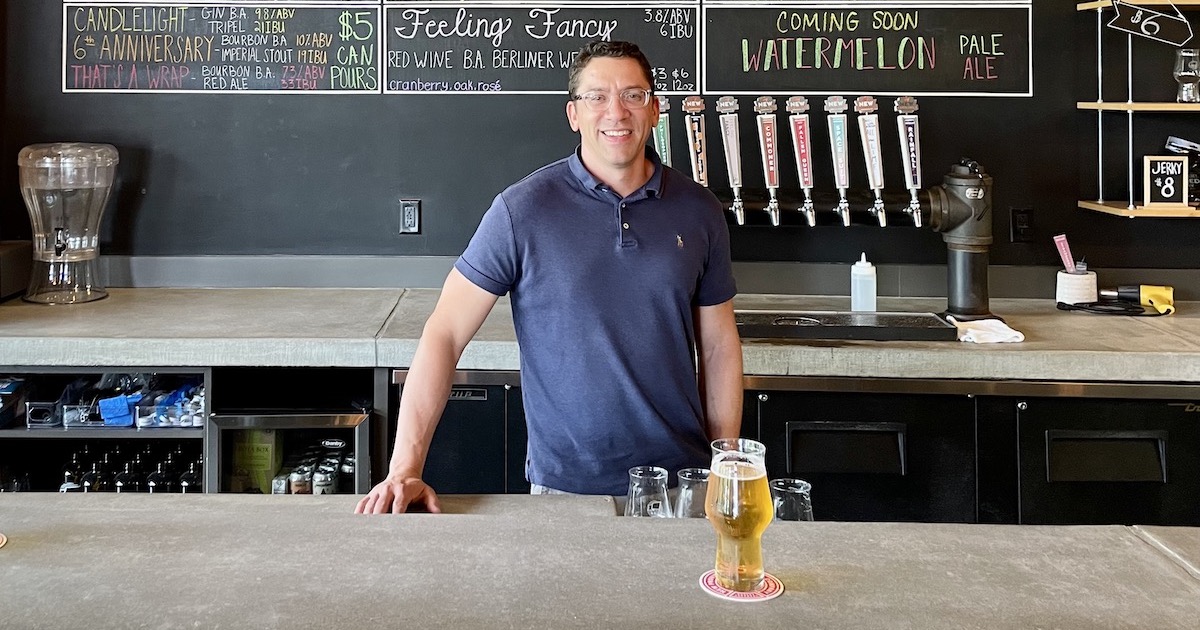 It was a hot, humid weekday afternoon at Rogers, and it was quiet in the dining room. Behind the windows, in the middle of stainless steel tanks, guts and pallets of cans, hides the new co-owner of New Province Brewing Co.

John Lee invited me to sit at a makeshift table near the loading dock. His laptop was open and the paperwork was strewn about. These were the marks of a busy man.

“I’m usually here until about four or five o’clock,” he said. “And then I’m on my laptop in my apartment working again.”

Lee is no stranger to the brewing industry. Many know him from his days at Rebel Kettle Brewing Co., which he co-founded in 2016. He was also the head brewer and he created great IPAs such as Easy Roller, Headbangers Ball and Alphaholic. A loyal fan base has developed around the brewery and the brewer.

Lee won’t say much about his March 2020 release from Rebel Kettle. From the outside, it seemed odd. Lee was the creative force behind the brewery, his heart and his soul. “It was a good race, and it was fun while it lasted,” he offered. “Immediately afterwards I thought, ‘Hey, maybe this is just how it’s supposed to be.’ ”

Rebel Kettle was renamed East Sixth Brewing Co. after Lee’s departure. It closed six months later. It could serve as a case study of how a thriving brand can decline and die in a short time.

After the split, Lee took a job with Crow Burlingame Auto Parts as a district manager. He covered southeast Arkansas and was responsible for 11 stores. He spent a lot of time on the road, away from his family. It wasn’t the path he thought his life would follow, but he seized the opportunity to sharpen his business skills.

I asked him how the New Province agreement came about. It was not common knowledge that the owners were looking to sell.

“You have to be looking for an opportunity,” he said. “If you’re not watching, you’re outside with everyone.”

Lee has partners in New Province, including Heather Parker-Foster (whose husband Matt Foster is co-owner of Flyway Brewing in North Little Rock) and a few others who are silent.

“We all sat down about a month ago and talked about what we want these early stages to look like,” Lee said. “We always try to feel things.”

When news of the deal broke, many wondered if Lee would brew new batches of Rob Gnarley, Black Reign or Redrumpum. He made these beers at Rebel Kettle with great success. It was natural to think that he would want to brew them again.

“I appreciate people still talking about Rebel Kettle,” Lee said. “But the focus is not on me now. That’s pretty much where we’re taking the New Province. It’s about doing more of the good things they’ve been doing here since 2016.”

New Province is one of the largest brewers in the state, producing just under 2,000 barrels of beer per year. Philosopher King IPA and Fallen Queen – a Belgian-style beer – are ubiquitous in northwest Arkansas. Seasonal releases and other one-offs are also popular with local beer drinkers.

Head brewer Kort Castleberry, who joined New Province in October 2017 after a stint at Fossil Cove Brewing Co., should be credited with much of the brewery’s success. Lee said Castleberry’s creative approach and commitment to quality won him over when considering the purchase.

“It’s all about Kort,” Lee said. “He’s been doing this for five years now, and I don’t want to change that. He’s doing a great job and he’s a big part of our future plans.

The new province has been distributed in central Arkansas since late 2021. The brewery was warmly received, but sales fell short of expectations due to brewery capacity constraints. Lee said one of the immediate goals was to produce enough beer to adequately serve Pulaski County.

The 15-barrel brewhouse is large enough to increase production, but existing fermentation space is limited. New Province is in the process of obtaining several large fermenters from a recently closed Fayetteville brewery.

“There’s definitely room here for more tanks,” Lee said of New Province’s 8,100-square-foot footprint. “We just need to do some minor renovations to accommodate them. We will have to extend trench drains and glycol tracks, for example. »

Castleberry will continue as head brewer, but Lee said he knew he was going to get itchy soon. At some point, he will make his own beer. In fact, he recently announced on social media that his first batch was already under his belt.

“Do I want to get back on the brewing deck?” he asked rhetorically. “Of course I have things that I haven’t done [at Rebel Kettle] what I would like to do over time. I will try to focus on taproom only versions and small batches when brewing.

Lee’s first beer in New Province is called West Hudson (named after the road the brewery calls home). It’s a hazy IPA brewed with Citra and T-90 hops. In the future, Lee will likely do some fun fruity sours and other stuff that pushes the envelope. He has a few ideas, but his ideas are not dominating his thinking right now. He has other worries, like the growth of the business he is now responsible for.

“The priority is to produce the best possible product and give people what they want,” Lee said. “And then the next step is to do more.”

Growing the business through distribution—both within Arkansas and across state lines—is the plan. Adding staff to develop sales will go a long way towards achieving this. The increase in bar traffic is also important to Lee. And he sees an obvious way to do it. People like to eat while they drink, after all.

“We need a constant food source,” he said. “We have food trucks a few days a week, but it’s not always regular. Getting more reliable options will attract more people, and they’ll stick around longer while they’re here.

Lee has been commuting to Rogers from his Sherwood home since the deal was struck with the new province in April. He has an apartment in Bentonville, but due to the heavy workload he hasn’t had time to explore the area. Time away from his family is difficult. He and his wife have thought about moving to northwest Arkansas, but they aren’t quite ready to uproot their two young children.

“It’s not out of the question,” he said. “But it’s okay for now. I was living in hotels for my last job, so it’s not much different from what I’m used to. In fact, it’s like a dream compared to some of these trips.

There is a lot of work to be done before the full vision of the future of the New Province is realized and significant changes take place. It’s obvious that the new owners of the brewery appreciate its history, its products and the people who have made it what it is today. Only time will tell what improvements can be made to what is already a well-respected Arkansas brewery.

Despite the long commutes, lonely apartment, and heavy workload, Lee is happy to be back on track.

“It feels really good to be back in the brew,” he said. “It’s kind of hard to describe because I’m so busy trying to figure it out. But it feels like home, and that’s cool.