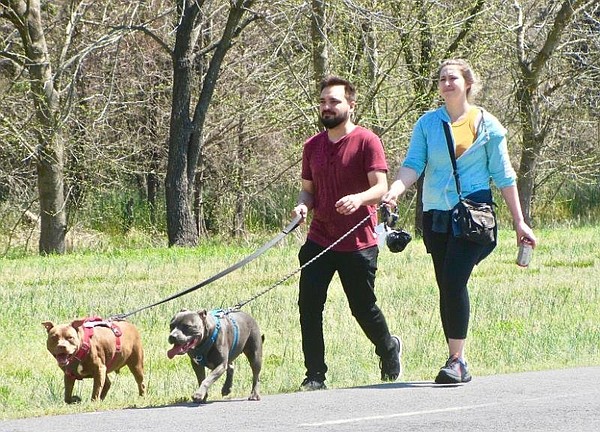 Three parks on just 10 km along the northwest outskirts of Little Rock provide a lively potpourri of springtime fun. They await visitors on and near the south bank of the Arkansas River between the I-430 bridge and Lake Maumelle.

Enjoyment ranges from hiking to fishing, biking to bird watching, picnicking to camping and a host of other recreational options. Admission to all three parks is free, as are most activities. Given the proximity to Little Rock, some facilities can be crowded on weekends from spring through fall.

Each park has its distinctive tenor, reflecting distinct management by local, federal and state authorities. The easternmost, Two Rivers Park, is operated by Pulaski County and the City of Little Rock. Maumelle Park is managed by the US Army Corps of Engineers. Pinnacle Mountain State Park, the largest and best known of the three, is owned by the Arkansas Department of Parks, Heritage, and Tourism.

Drivers reach Two Rivers Park by turning north from Cantrell Road (Arkansas 10) on Pinnacle Valley Road, then continuing east on County Farm Road. As they enter the 1,000-acre park, they pass Little Rock Garden Center, where people grow crops on their rented plots. Signs warn would-be tomato or other vegetable hijackers that “taking the produce is punishable by law.”

The flat, flat terrain of the park at the confluence of the Arkansas and Little Maumelle Rivers was once the site of the Pulaski County Penal Farm. Prior to its closure in 1974, the farm housed up to 2,000 prisoners who grew corn and soybeans as well as cattle, pigs and chickens. It was dedicated as a park in 2011.

Two paved footpaths are wide enough to accommodate pedestrians and cyclists. One, a “lollipop” route, has a long mostly straight stretch ending in a small loop. Nearby are public toilets in a handsome stone and wood structure that could pass for a compact border palisade.

The other trail, also accessible from the site’s two parking lots, loops through open fields with views of both rivers to the I-430 bridge. Along the trail, one can see the “Garden of Trees” project aimed at cultivating native tree species.

Maumelle Park, about 3 miles northwest of the Three Rivers site, has family facilities for overnight campers and day visitors. Especially on weekends, the bank of the Arkansas River near the mouth of the Petite Maumelle teems with multigenerational gatherings of picnickers. Some picnic in rented pavilions.

Corps of Engineers parks are known for the quality of their camping facilities, and Maumelle Park gets high marks on RV owner websites. Visitors who have just stopped here can sport a spectator by driving slowly past the RVs, some as big as a Greyhound bus. Some campers happily wave to passers-by.

From Maumelle Park, it’s just over a mile further west on Pinnacle Valley Road to the eastern edge of Pinnacle Mountain State Park. One of the 51 busiest state parks in Arkansas, it challenges visitors with an arduous signature activity: climbing the rocky peak.

Shaded benches provide comfortable rest in Two Rivers Park. (Special for the Democrat-Gazette/Marcia Schnedler)
But the park’s river connection is at the end of the road to the West Summit trailhead. The boardwalk stops at a boat launch for the Little Maumelle River, where visitors can fish under the overhanging branches. A sign indicates the Little Maumelle River water trail, which can be traveled by canoe or kayak.

Continuing west, the Arkansas 10 eventually skirts the southern shore of Lake Maumelle. A bifurcation at the Grande Maumelle Sailing Club gives free rein to your imagination aboard one of the sailboats and other moored pleasure boats.

Near the western end of the lake, a sign at the Little Vista Park lookout points to Maumelle Lake as the main source of drinking water for central Arkansas. A notice, written in stilted terms, warns that “body contact is prohibited” – in other words, “no swimming in potable water”.