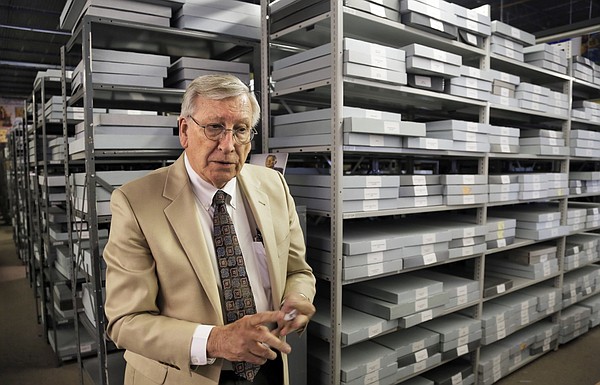 Little Rock served as a major economic and administrative center for the movement of Indians west of the Mississippi River, said Daniel Littlefield, director of the Sequoyah National Research Center at the University of Arkansas at Little Rock, during a conference Thursday.

The conference was held as part of the “La Petite Roche Tercentenary,” a list of events marking 300 years since Jean-Baptiste Benard of La Harpe de France traveled the Arkansas River near present-day Little Rock in 1722 during an expedition.

Eight people, not including a UALR official, were present at UALR’s downtown campus in the River Market for the Littlefield conference, titled “Little Rock: A Pivotal Point on the Trail of Tears.”

The forced displacement of tribes from the southeastern United States to lands west of the Mississippi took shape as a result of treaties under the Indian Removal Act of 1830, signed by President Andrew Jackson.

All of the tribal groups that have been pulled out of the southeast have passed through Arkansas, according to the Sequoyah National Research Center.

In his lecture, Littlefield estimated the number of Indians who passed through Arkansas beginning in 1831 at 60,000 – “Choctaws first, Muscogee Creeks second, Seminoles third, Chickasaws fourth, and Cherokees fifth.”

The main travel routes at the time were through Little Rock. However, as important as Little Rock’s geographic location is, its role as an economic and administrative center tied to the move, according to Littlefield.

Over time, millions of dollars have flowed into Little Rock as a result of the “lucrative” contracts associated with Indian removal and the ration stations that were set up to facilitate it, Littlefield said.

There was a need for banks, but Arkansas’ status as a territory meant it couldn’t create banks, he said. Arkansas was finally granted statehood in June 1836 as a slave state, entering the United States shortly before Michigan, which was designated a free state.

Arkansas, and Little Rock in particular, was “the place to be – that’s where millions of dollars flowed in that decade,” Littlefield said.

Entrepreneurs and people interested in “quick money” have proliferated in the state, which has become “a real economic hub”, he said.

The Indian withdrawal provided the money to install a number of people in positions of influence in Arkansas, he said.

Other long-term effects included road development: when Arkansas became a state, road construction and maintenance was given to counties, which had no money, so roads stayed where they were, Littlefield said.

Many roads that locals use today are located where they were in the 1830s, he said.

“We have more roads we take on the Trail of Tears in Arkansas than any other state in the union,” he said.

Indian removal also delayed Arkansas’ entry into the cotton economy for a decade, as individuals grew corn, small grains and forage as cash crops instead of cotton, Littlefield said.

Additionally, the displacement of Indians contributed to the development of the slave trade in Arkansas, Littlefield said, as thousands of black people — either free, enslaved by tribal members or runaways from white plantations in the South — came west with the tribes.

Contemporary advertisements in the Arkansas Gazette reflect plantation owners east of the Mississippi looking for runaway slaves who were last seen with a group of tribal members along the road, Littlefield said. .