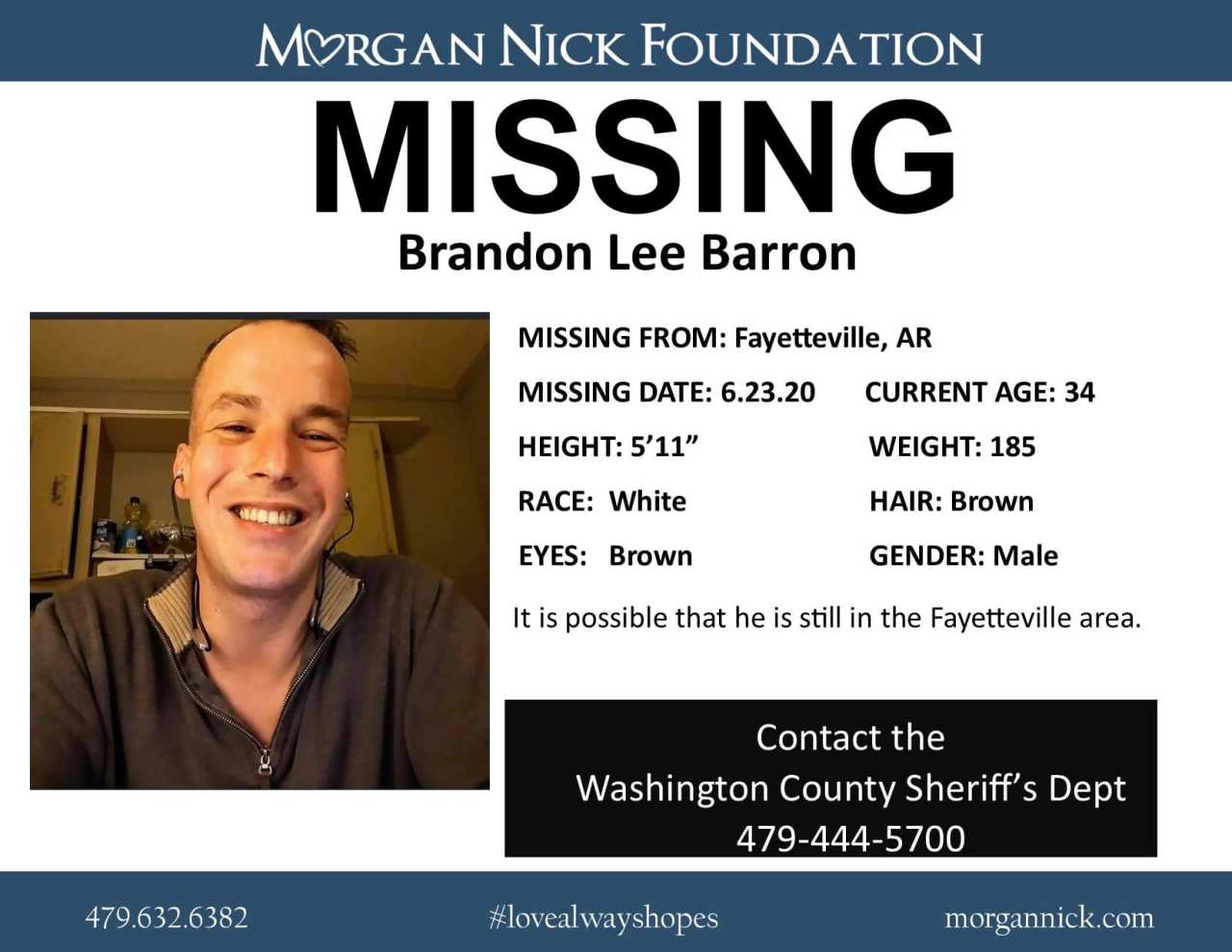 Shelley read aloud from a text she sent her son in October 2021: “I love you and miss you. I hope one day you will understand this.

On the other side of the line, silence.

“Waiting on the phone is the hardest thing a mother can go through,” Shelley said. “Finding out that your son is alive or dead is really difficult.”

Brandon’s parents last saw him in June 2020, walking alone on the side of Highway 265 in front of the Hog Eye Mall in Washington County.

“We don’t know if he disappeared because he’s in a delusional state trying to separate himself from everyone and get away from everything or if something happened to him,” Darrell said. .

Growing up, his parents say Brandon was smart – graduating from West Fork High where he was a drum major.
But Brandon was drawn to the party lifestyle and turned to drugs.

“He told his dad he heard voices all the time,” Shelley said. “If I had known, I would have asked him for help.”

Just a month before they last saw him, Brandon’s parents say he checked himself into a mental hospital and texted Shelley.

“Happy Mother’s Day Obviously I’m broke and the struggles are real, [I] would have sent you a card… thinking of you, I love you.“

Brandon’s parents say he was only in the hospital for a few days, didn’t take his medication and started sending them threatening messages.

“I really believe that from his actions and the messages he would send me that were totally bizarre, he was dealing with schizophrenia,” Darrell said.

Worried for their safety, Darrell and Shelley say they couldn’t let Brandon stay at their house.
From there, they heard Brandon was bouncing around friends’ couches until they stopped getting updates altogether.

“We checked with every mental health facility we could find, our crisis stabilization unit…all of our hospitals.” said Washington County Sheriff’s Detective Andrew Morris.

Brandon’s nomadic lifestyle only made his search more difficult.

“We don’t have it anywhere,” Morris said.

Morris said the last time Brandon was seen on file was in December 2020, when he was fired from the Fayetteville Salvation Army for violating curfew.

“I just want to find him, have a conversation with him, and connect him with his family,” Morris said.

“If our son doesn’t want to come home, let us know you’re okay,” Shelley said. “Let us know that you are well so that we have peace in our hearts.”

Det. Morris entered Brandon’s name, DNA, and fingerprints into several national databases.
Now their hope is in the hands of a match or text return.

Shelley read aloud the last text she sent to Brandon.

“I don’t know if you see them, but I just want to let you know that we love you. We’ll never give up looking for you. I just want to make sure you’re okay.

The Best Places to Visit in Arkansas