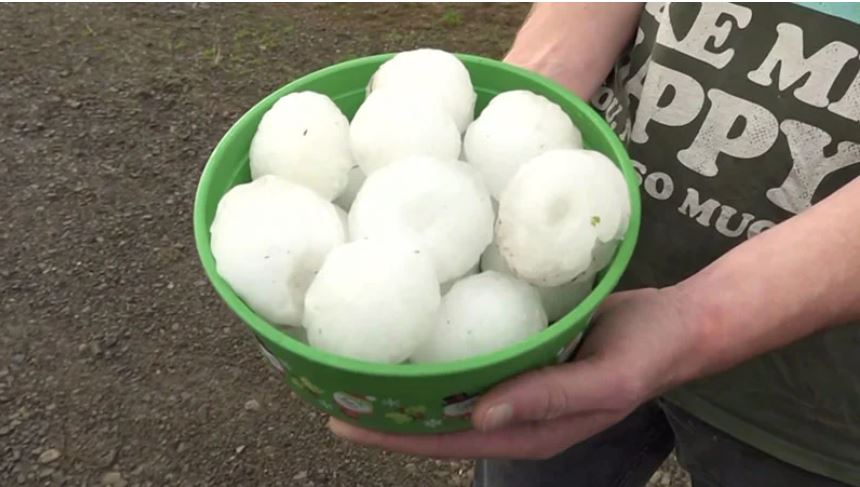 The National Weather Service declared a tornado emergency at one point as storms moved through parts of Faulkner and northern Pulaski counties.

As the storms moved through the state, multiple tornado warnings were issued, with the NWS Storm Prediction Center indicating there were at least six reports of a tornado in Arkansas.

Hail was also a huge problem of these storms. Videos from Lonoke and Franklin County showed hail falling in Cabot, possibly damaging many vehicles.

Owners examining the damage on Tuesday morning found that not only had many of the cars been damaged, but also their roofs.

Looking closer at the hail, a Franklin County resident picked up a bowl of massive hail that can be seen strewn across the ground the morning after a night of severe weather.

Video from Fort Smith in northwest Arkansas also showed heavy hail. Less than two weeks after the storms rocked the river valley, tornado shelters were made available at all elementary and middle schools in Fort Smith.

Monday was just the first wave of storms expected for the week.

The Storm Prediction Center has nearly the entire state of Arkansas a slight chance of severe weather for Tuesday with higher chances of storms in the evening through overnight.

Stronger storms will affect the region on Tuesday and Wednesday

For Wednesday, the SPC puts the eastern three-quarters of Arkansas at even higher risk from storms, with high winds, damaging hail and multiple thunderstorms likely in nearly a dozen states.