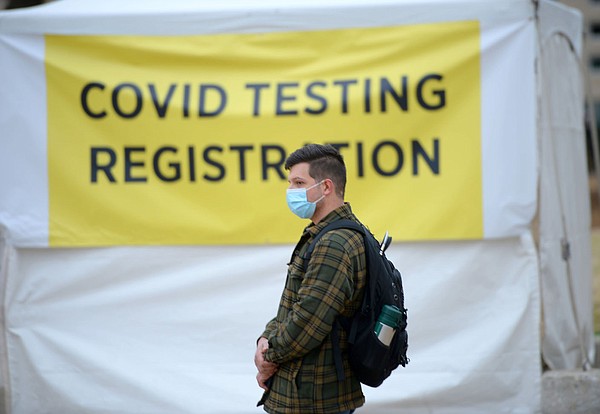 The number of coronavirus cases in Arkansas rose by 812 on Wednesday, a bigger increase than a day earlier but lower than the peak of 954 cases the previous Wednesday.

After dropping the previous two days, the number of covid-19 patients in hospitals across the state rose Wednesday by 15, to 193.

The state’s death toll from the virus, as shown on the state’s online coronavirus information dashboard, rose by two, to 11,552.

She said the child deaths were “not very recent”, but were added to the official toll after a review to verify they were linked to the virus.

The deaths will be added to the overall toll shown on the dashboard today, she said.

Meanwhile, she said, the state expected to receive the last shipments of its second “wave” of covid-19 vaccine shipments for children as young as 6 months old on Wednesday.

The first wave, consisting of 15,000 doses each of the Pfizer and Moderna vaccines, arrived at nine of the Department of Health’s local health units on Monday. These doses were distributed to other local health units in the state as well as to private clinics and pharmacies.

The second wave included 2,000 doses of the Pfizer vaccine that the Department of Health planned to redistribute around the state as needed.

It also included 800 doses of Pfizer and 300 doses of Moderna that were to be shipped directly to healthcare providers.

Beyond the second wave, Dillaha said, the state had also ordered 1,000 additional doses of Moderna and 900 doses of Pfizer. More details on those orders were not available Wednesday.

In Jonesboro, Woodsprings Pharmacy received an initial supply of 100 doses of each of the Moderna and Pfizer vaccines on Tuesday, said Brittney Johnson, the store’s operations manager.

She said the pharmacy gave injections for the new age group to two children on Wednesday afternoon.

“No problems, of course,” Johnson said. “No child likes to be vaccinated, but a few tears and everything was fine.”

In Little Rock, the Wellington Pharmacy was planning a vaccination clinic this afternoon for children aged 6 months to 5 years.

Although federal and state laws do not allow pharmacists to vaccinate children under 3, a pediatrician offered to volunteer at the clinic, allowing vaccines to be offered to young children, said Brittany Sanders, one of the store owners.

“He was very strong that he wanted to help parents get their kids vaccinated if they were interested in doing so,” Sanders said.

She said the doctor’s wife, who is also a pediatrician, will also volunteer at the clinic.

She said the pharmacy has an initial supply of 30 doses each of the Pfizer and Moderna vaccines for the new age group and is on track to have appointments filled to administer all doses at the clinical.

“There’s been some interest,” Sanders said.

“It’s not as intense as when the vaccine first came out for adults, but there are definitely parents who want to get their children vaccinated as soon as possible.”

Both vaccines are low-dose versions of the companies’ vaccines that are available for adults.

Dr. Rochelle Walensky, director of the U.S. Centers for Disease Control and Prevention, on Saturday endorsed an advisory committee’s recommendation that all eligible children receive a vaccine, paving the way for providers to begin administering the shots.

A vaccine had not previously been authorized for children under 5 years of age.

Anna Strong, executive director of the Arkansas chapter of the American Academy of Pediatrics, said most pediatric clinics in the state expect to have their first supply of vaccines for the new age group by end of the week, and several offered appointments for Friday. .

“I think next week will probably be a better time for everyone feeling able to come in and make sure they have a choice of either vaccine,” she said. declared.

“Of course, some people incorporate it into healthy child visits, but a lot more people do some sort of clinic at the start of availability for a new population so that part of their team just focuses on that,” Strong said. .

Breaking a gradual upward trend in new covid-19 cases that began in April, Wednesday’s increase was the second in three days that was lower than a week earlier.

After rising slightly a day earlier, the state’s average daily increase in the number of cases over a rolling seven-day period fell to 699 on Wednesday, from the nearly four-month high of 727 a day than average. reached Sunday.

Growing for the second day in a row, the number of cases in the state considered active rose by 124, to 8,468, as new cases outpaced recoveries.

However, Wednesday’s total was still down from a nearly four-month high of 8,763 active cases on Sunday.

“I think the trend is slowing down,” Dillaha, the director of the health department, said of the state’s new case count.

After rising the previous two days, the number of virus patients in the state who were on ventilators and in intensive care both fell on Wednesday.

The number of people on ventilators, previously at its highest level since April, fell by four, to 11.

The number of people in intensive care, which was at its highest level since March, fell by nine, to 32.

At its hospitals in Little Rock and Springdale, Arkansas Children’s had seven patients with Covid-19 on Wednesday, up from eight on Tuesday, spokeswoman Hilary DeMillo said.