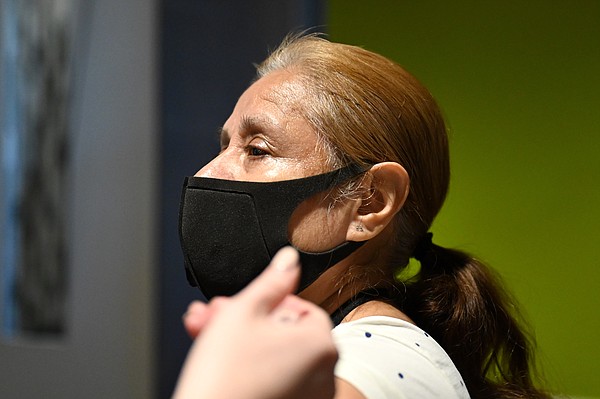 One-day cases in Arkansas rise by 161, hospitalizations rise by 3

Breaking a recent upward trend, the number of coronavirus cases in Arkansas rose by 161 on Wednesday, the first daily increase in four days that was lower than the previous week.

After remaining unchanged a day earlier, the number of people hospitalized in the state with covid-19 rose by three, to 50.

The state’s death toll from the virus, as tracked by the Arkansas Department of Health, rose by two, to 11,377.

The state’s average daily case count increase over a rolling seven-day period fell to 122, which was still up from an average of 86 per day the previous week.

Already at its highest level since March 27, the number of cases in the state considered active rose by 56, to 1,372, as new cases outpaced recoveries and deaths.

Dr Jennifer Dillaha, chief medical officer for the Department of Health, said it was possible a rise in cases, initially sparked by gatherings over the Easter weekend, were starting to subside.

“Easter was kind of a big weekend, and there were a lot of family gatherings and larger groups, potentially, which may have contributed to the swell,” Dillaha said.

“Now there’s less, so over a period of time the spread has gone down a bit.”

She said the Department of Health, which stopped contact tracing in January, was unable to determine the cause of a spike in infections in Greene County, which contributed to a share disproportionate number of new cases in the state in recent days.

The 15th-largest county in the state by population, Greene County continued to have the second-highest number of active cases in the state, 119, down from 118 on Tuesday.

Pulaski County, with 286 active cases Wednesday, continued to have the highest total. Benton and Washington counties tied for third with 114 active cases each.

“They may have just been unlucky enough to have the right mix of infected people spreading the virus against the backdrop of low community vaccination rates,” Dillaha said of the recent spike in Greene County. .

According to the US Centers for Disease Control and Prevention, 43.2% of county residents had been fully vaccinated as of Wednesday.

Dr. Callie Talley, director of infection prevention and employee health at Arkansas Methodist Medical Center in Paragould, said in a statement that the hospital is “working with Greene County Health Services and Arkansas to determine the epicenter of this current outbreak.”

“While the rise is certainly concerning, we are not seeing a rapid increase in inpatient COVID-19 patients, outpatient COVID-19 visits, or hospital staff discharged with COVID-19,” Talley said.

“AMMC will continue to monitor data and work with local health units.”

A spokeswoman said the hospital had a covid-19 patient on Wednesday.

Dillaha said the two deaths reported Wednesday in Arkansas occurred within the past month.

The number of covid-19 patients statewide who were on ventilators rose by one, to 11, after falling to a 23-month low a day earlier.

After falling to its lowest level since at least May 2020 on Tuesday, the number of people in intensive care rose by two, to 17.

At its hospitals in Little Rock and Springdale, Arkansas Children’s had two patients with Covid-19 on Wednesday, the same number as the day before, spokeswoman Hilary DeMillo said.

She said none of the patients on Wednesday were in intensive care or on a ventilator.

VACCINATIONS ON THE RISE

The tally of doses of vaccines administered by the Ministry of Health rose by 4,309, an increase of more than 1,800 from the daily increase a week earlier.

More than half of the increase came from boosters – either initial boosters or second ones that were approved last month for people aged 50 or over or with weakened immune systems.

The number of first doses increased by 1,190, which was 749 higher than the increase in first doses a week earlier.

The average number of total doses given each day over a rolling seven-day period rose to 2,266, which was slightly higher than the previous week’s average of 2,223 per day.

The average for the first doses rose to 546, the highest average since the week ending February 25.

According to the CDC, 66.6% of Arkansans had received at least one dose on Wednesday, a percentage that had not changed since Sunday.

The percentage of fully immunized people who received a booster dose remained at 39.5%.

Among the states and the District of Columbia, Arkansas continued to rank 37th in the percentage of its residents who received at least one dose and 46th, ahead of Idaho, Louisiana, Mississippi, Wyoming and Alabama, for percentage fully vaccinated.

Nationally, 77.5% of people had received at least one dose and 66.1% were fully vaccinated.

Among the nationally fully vaccinated population, 45.7% had received a booster dose.