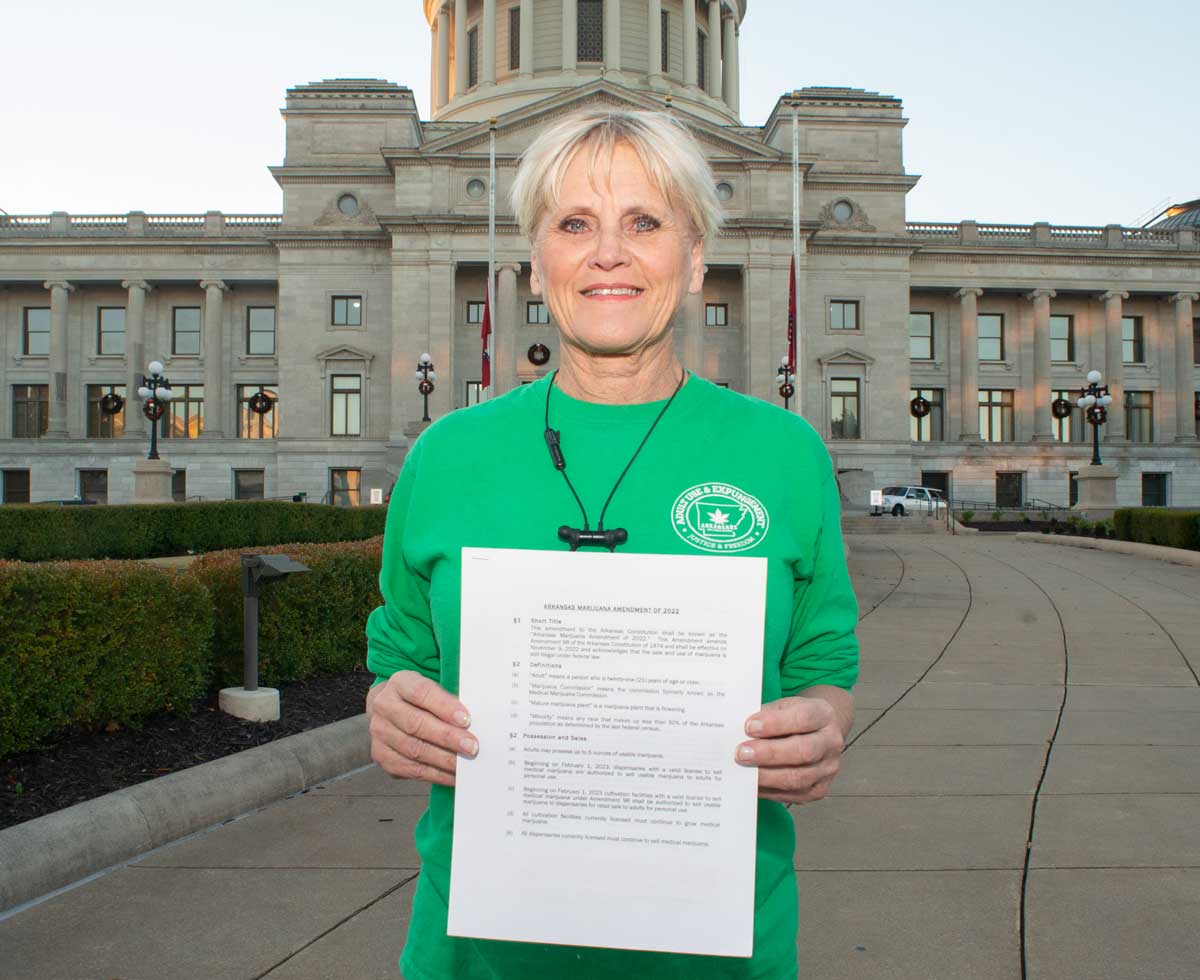 Ongoing campaign for the legalization of marijuana

Adults in Arkansas will be able to legally buy recreational marijuana by February 2023 if a recently tabled constitutional amendment proposal is passed and approved by voters next year.

The 2022 Arkansas Marijuana Amendment, filed and later revised in November by longtime Arkansas marijuana advocate Melissa Fults, will allow Arkansans 21 and older to possess up to 5 ounces of marijuana. The amendment would allow adults to grow up to six plants in “micro-grow” co-ops, expunge criminal records for certain marijuana-related criminal offenses, and increase the number of dispensaries and health facilities. culture.

The amendment would make Arkansas the first state among its neighbors and only the second state in the South, after Virginia, to legalize marijuana for recreational use. A total of 19 states and the District of Columbia have legalized marijuana for adult use. Thirteen of those states approved it at the ballot box, while the rest were signed into law by state legislatures.

Chronic and terminally ill patients could also receive a lifetime marijuana card for a maximum fee of $100. Patients currently have to pay $50 to renew their card each year.

Recreational marijuana purchases would be taxed at 15% under the amendment. Revenue from the tax would be used to administer the marijuana program, with excess revenue split into four categories: pre-school and after-school programs (40%), a fund to provide free or discounted medical marijuana to low-income patients (20%), the University of Arkansas National Cancer Institute for Medical Sciences (20%), and General Revenue (20%).

The amendment also removes non-violent felony and misdemeanor convictions for possessing or selling 16 ounces or less of marijuana, six or fewer marijuana plants, and paraphernalia intended for use with marijuana.

“There are far too many people, especially people of color, whose lives have been destroyed because of a plant,” Fults said.

Fults said she expects to have enough financial support from people who have expressed support for her amendment.

“If everyone shows up, I will definitely have enough money to collect signatures and get elected,” she said.

David Canape, who successfully drafted the 2016 amendment in Arkansas, is working with Fults to get the 2022 amendment passed. Couch said he offered suggestions on how to revise Fults’ amendment to make it easier to enact, including automatic deletion of records rather than having to go to court.
Couch, who backed a different amendment from Fults in 2016, previously said he thinks Arkansas will pass a recreational marijuana amendment with the right regulatory and tax structure.

Couch said he expected opposition to the 2022 amendment, but he is confident in the positive aspects of the proposal and said arguments against his 2016 amendment never materialized.

The Arkansas Marijuana Amendment of 2022 isn’t the only recreational marijuana initiative supporters are trying to get through.

Real Arkansas Grass, a group of advocates and volunteers, filed the Arkansas Recreational Marijuana Amendment of 2022. This amendment would allow adults to purchase up to 5 ounces of marijuana per day and grow up to 12 plants. The amendment would also erase criminal records related to marijuana.

Additionally, former state legislator Eddie Armstrong filed a voting panel called “Responsible Growth Arkansas” with the Arkansas Ethics Commission in October. The filing says the committee will “advocate for passage of an amendment to the Arkansas Constitution to allow the regulated sale of cannabis for adult use in the state.” The filing lists Armstrong as committee chair and TJ Boyle as treasurer.
Responsible Growth Arkansas did not file an amendment with the Arkansas secretary of state, which is needed to begin collecting signatures to appear on the ballot. Armstrong said via email that more details on the initiative will be released in December.

“Between our efforts and the other two proposals filed with the state, there is clearly a growing consensus and support for an expansion of adult recreational cannabis use in Arkansas,” Armstrong said. “We are committed to doing this in a responsible and regulated manner and we take the time to do it right. We are confident that as we grow our campaign efforts, we can provide unified support behind common sense proposals to move our state forward.

An amendment must have 89,151 verified signatures to appear on the ballot. The deadline for submitting petitions is July 8, 2022.

Polls and election results show that Americans have increasingly accepted the legalization of marijuana in recent years.

A series of national polls show support for legalization, including a Gallup poll released in November that showed a record 68% of respondents in favor of legalization. That number jumped from just 12% when Gallup first polled the question in 1969 and doubled to 34% in 2001.

A poll in Arkansas last year found similar support. Conducted by Talk Business and Hendrix College on June 9 and 10 last year, the poll found that 23.5% supported the expansion of medical marijuana dispensaries and growers, 19% supported the legalization of recreational marijuana and 46.5% supported both. The poll suggests that 65.5% of respondents were in favor of legalizing marijuana for recreational use.
“Look at just about any state or national poll, and the numbers keep going up year after year,” said Jared Moffat, State Campaigns Manager for the Marijuana Policy Project.

The Marijuana Policy Project, a Washington, D.C. nonprofit and lobbying organization helps push marijuana initiatives across states across the country and provided support for Arkansas’ successful medical marijuana amendment in 2016.

After initially passing marijuana laws in more liberal states like Colorado and Washington, the organization has moved to states that would be less friendly to marijuana initiatives, but the results have always been favorable, Moffat said. .
Even in the traditionally conservative states of Montana and South Dakota, marijuana initiatives passed the ballot box last year by healthy margins. Montana passed a legalized adult use initiative by 57% to 43%, and South Dakota passed legalized adult use by a vote of 54% to 46%. (Although the South Dakota measure passed, it was ruled unconstitutional earlier this year).

“I think when we can put it on the ballot we feel very confident because we know [the majority of] voters in every state … agree with us,” Moffat said.

Virginia became the first state in the South to legalize recreational marijuana when the Virginia legislature voted to legalize it earlier this year. The new laws came into force in July.

10 Must-Do Activities in Northwest Arkansas During the Holidays