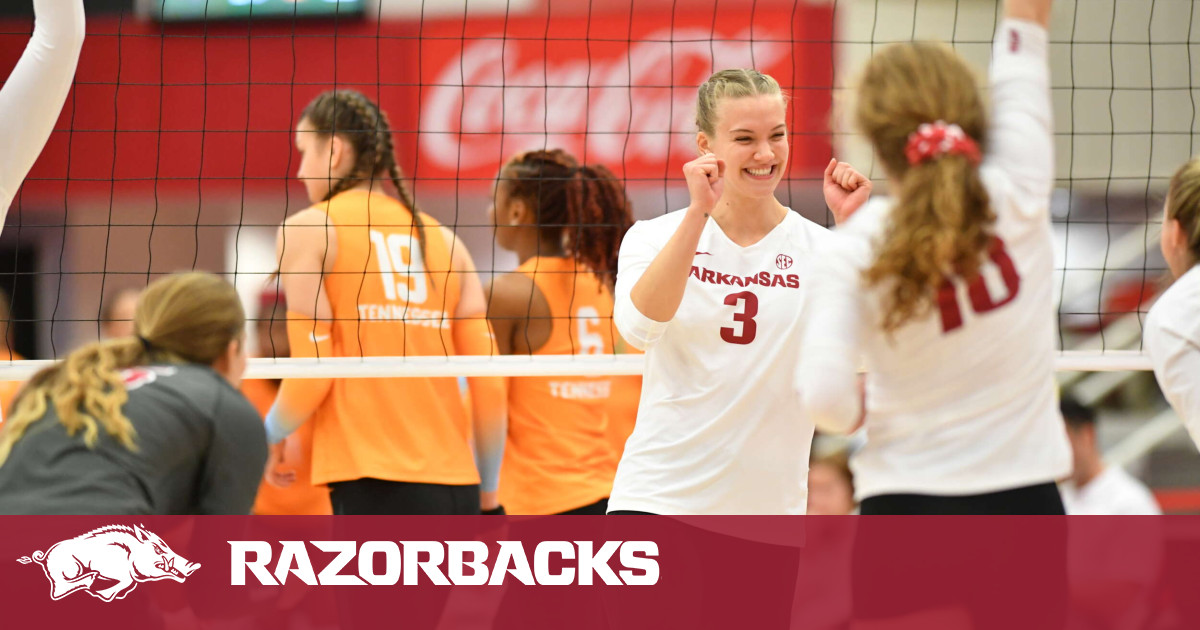 The Razorbacks returned to the win column on Friday in dramatic fashion as the Hogs won 3-0 against the Lady Vols for the first time in five years.

Arkansas hadn’t beaten Tennessee since the spring 2021 season and it’s just the fourth win in the last 11 outings between the two for the Razorbacks. The Hogs hadn’t swept the Vols since 2017. Arkansas is now 12-5 overall and 3-4 in the SEC, and Tennessee moves to 10-9 and 4-3 in conference.

Senior Jill Gillen had 12 kills that day, which led the Hogs, and junior Taylor Head was right behind with 10 kills and a .364 hit percentage. Four other Hogs have killed Hailey Dirrigl, Maggie Cartwright, Tatum Shipes and Abigail Archibong at least five times a day. Arkansas hit .333 overall overnight, its highest percentage since Alabama State on Sept. 2.

Set 1
The Hogs got off to a strong start in the first set and went 6-1, which included two service aces from Head and sophomore Hannah Hogue for a 9-4 advantage, which sent Tennessee to a dead time. The Vols came within a short time, but the Hogs held them off and extended the lead with three straight wins by Dirrigl, Gillen and Shipes. The Vols couldn’t mount a comeback after that and never cut the deficit below two. A pair of wins from Gillen and Cartwright made it 21-16 in favor of the home side, and Tennessee took another timeout. The Hogs responded with two straight wins and while the Vols nailed two more, a Gillen victory closed the first 25-18 for Arkansas.

Set 2
The Razorbacks grabbed the first point of the second set, but the Vols quickly responded and turned the momentum in their favor through the first 10 points. Three kills from Cartwright, Gillen and Archibong made it 11-11, and Tennessee added one, but the Hogs took control after with a three-run run capped by an ace from second libero Courtney Jackson for a lead advantage. 14-12. Tennessee called time, and the Vols stayed alert and the score was tied five times. An offensive error from Tennessee and a kill from Gillen put the Razorbacks back by two, who held until the end of the set. Dirrigl slammed the door with a kill for the 25-22 win and a 2-0 lead in the game.

Set 3
The third set went home and away early, but a Cartwright kill made it 5-4 for Arkansas, a lead the Hogs held on to halfway through. The Vols briefly tied at 12-12, but three unanswered Razorbacks put them back in the lead at 15-12. Tennessee quickly went 15-15, but another three-point run thanks to two kills from Shipes and one from Dirrigl made Arkansas 18-15. Tennessee took a timeout but couldn’t manage more than two runs at a time, and a service error sent the Hogs to the set and match point. The Vols bungled it five times, but Gillen had his 12th kill of the day for a narrow 25-23 straight-set victory for the sweep.

Next
Arkansas and Tennessee meet for the series finale Saturday, Oct. 15 at Barnhill Arena at 5 p.m. The match will be broadcast live on SEC Network Plus.