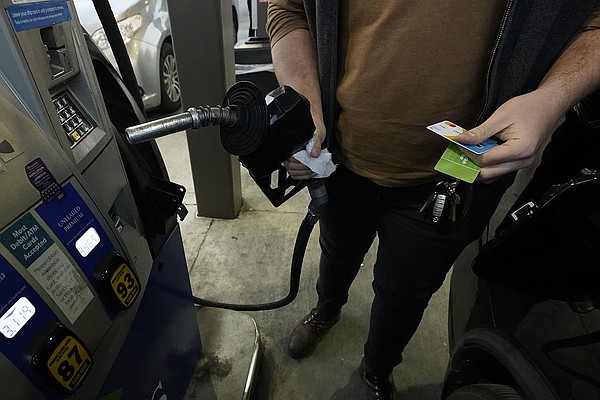 WASHINGTON – The U.S. economy contracted in the first three months of the year and faces threats of high inflation and rising interest rates, but economists forecast a return to growth for the rest of 2022 depending on the strength of the labor market and consumer spending.

The first quarterly drop in gross domestic product since the pandemic hit in 2020 — a 1.4% drop on an annualized basis — is unlikely to be a prelude to a recession, economists say.

President Joe Biden told reporters at the White House on Thursday that the GDP report’s consumer spending and business investment were strong, evidence that growth is expected to pick up in the coming months.

“What you’re seeing is huge growth in the country that’s been affected by everything from covid and the covid lockdowns that happened along the way,” Biden said.

While the president maintained there would be no recession this year, he conceded that was a concern.

“You’re always worried about a recession,” he said.

Thursday’s report was more of an illustration of how volatile GDP calculations tend to be quarter-to-quarter, not necessarily indicating weakness in the economy or a sign of recession.

“With strong growth in consumer spending, business investment and employment in the first quarter, the U.S. economy was not in a recession at the start of the year,” said Bill Adams, chief economist at Comerica Bank. “Growth should pick up in the second quarter as the trade deficit and inventories become smaller headwinds.”

According to the Commerce Department report, two trends were the main drivers of the U.S. economy’s decline in the last quarter:

• Businesses had stocked up aggressively ahead of last year’s Christmas shopping season amid fears of pandemic-related supply shortages, so they restocked more slowly in early 2022, which weighed on GDP by 0.8 percentage point.

As a result, the country’s total production of goods and services fell well below the annual growth rate of 6.9% in the fourth quarter of 2021.

However, rising wages supported robust household spending, and rising profits boosted business investment. These factors suggest strong fundamentals for the US economy, even in the face of the challenges of the pandemic, the war in Ukraine and the Federal Reserve’s plans to raise interest rates to fight inflation.

“The report is not as ominous as it sounds,” said Lydia Boussour, chief US economist at Oxford Economics. “The details point to an economy with solid underlying strength that has shown resilience in the face of Omicron, continued supply constraints and high inflation.”

The US economy is in an unusual and difficult position.

The labor market – the most important pillar of the economy – remains robust, with the unemployment rate near a 50-year low of 3.6% and wages steadily rising. And in the January-March quarter, businesses and consumers increased spending at an annual rate of 3.7% after adjusting for inflation.

Economists consider these trends a better indicator of the fundamental strength of the economy than the latest GDP figure.

Yet serious threats have emerged. Supply chain disruptions in China and elsewhere are still a reality in the age of the pandemic, and the war in Ukraine is contributing to higher inflation, which is eroding consumers’ purchasing power. Last month, prices jumped 8.5% from a year earlier, the fastest rise in four decades.

“We are at a turning point in the economy,” said Gregory Daco, chief economist at tax consultancy EY-Parthenon. “The pace of growth is slowing down.”

The weak first-quarter results contrast with last year’s strong pandemic rebound, which was fueled in part by large government handouts and rock-bottom interest rates. With the end of stimulus checks and other government support, consumer spending has slowed from its blistering pace in the first half of last year.

The negative last quarter GDP number also undermines a key policy message from Biden. The president pointed to rapid growth as a counterbalance to soaring inflation. Compounding Biden’s woes, Russia’s invasion of Ukraine and rising covid cases overseas are weighing on the economy and increasing inflationary pressures. Many businesses also struggle to get the parts and supplies they need from tangled supply chains.

The Plano, Texas-based MOOYAH burger chain is facing higher costs for meat, buns and packaging supplies, and has raised wages to attract and keep workers.

Yet despite pandemic-related supply chain issues, MOOYAH still plans to open 20 more restaurants this year. “We believe very much in American consumers and the American economy,” he said.

Although imports jumped in the first quarter, covid shutdowns in China are expected to perpetuate supply shortages this year. Ford and General Motors said this week they still could not get all the computer chips they needed, costing them sales and forcing temporary plant shutdowns.

The global economy is expected to grow more slowly this year, according to the International Monetary Fund. He predicts that the war in Ukraine and covid will slow global growth to 3.6% this year, from 6.1% last year.

Thursday’s GDP report showed consumers are adjusting their spending habits as the pandemic wanes and higher food and gas costs eat away at household budgets. Adjusting for inflation, spending on clothing, gas and groceries fell in the first quarter. But Americans spent more on services, including travel and restaurants.

The Fed had hoped such a change would reduce inflation, as the prices of goods have risen more than services over the past year. But now the prices of airfares, hotels and restaurant meals are also rising.

Fed Chairman Jerome Powell announced plans for a rapid series of rate hikes to combat rising prices. The Fed is expected to raise its short-term policy rate by half a percentage point next week, the first such large increase since 2000. At least two more half-point increases – twice the more typical increase in a quarter point – are expected at upcoming Fed meetings. They would amount to one of the fastest rounds of Fed rate changes in decades.

Powell is betting that with job vacancies near record highs, healthy consumer spending and exceptionally low unemployment, the Fed can slow the economy enough to bring inflation under control without causing a recession. The Fed’s ability to do this is one of the main tests for the US economy in 2022.

Treasury Secretary Janet Yellen said Thursday that the global pandemic and Russia’s invasion of Ukraine highlight the possibility of large economic shocks in the future, adding that downturns “will likely continue to challenge the ‘economy”.

His speech at the Brookings Institution looked at lessons learned from past economic downturns and said countries needed to incorporate “recession remedies” to protect people in the United States and around the world in the future.

With “significant negative shocks” inevitable, she said, policymakers have learned from the recession that it is imperative to emerge from economic downturns “as quickly as possible”.

“Countries will fare better if their economies are more resilient and less fragile,” she said. “A better understanding of disruptions in supply chains, increases in commodity prices, the bursting of asset bubbles, and labor and productivity shocks can help policymakers put in place implement reforms that strengthen our economic resilience.”

Information for this story was provided by Christopher Rugaber, Fatima Hussein and Josh Boak of The Associated Press and Olivia Rockeman of Bloomberg News (TNS).