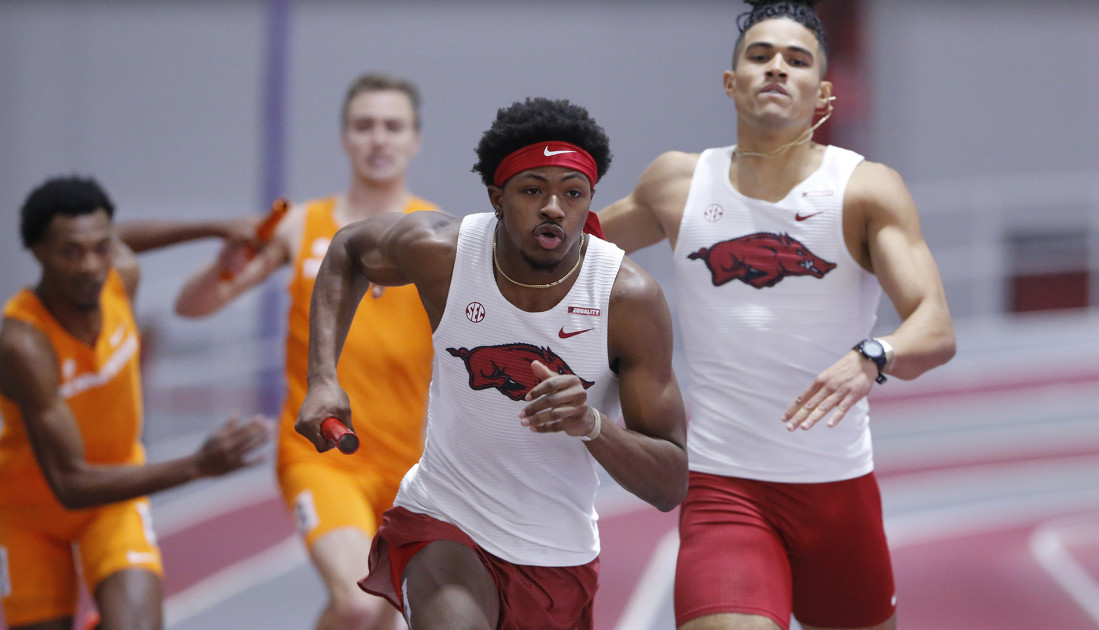 FAYETTEVILLE- Racing to a school record time of 3 minutes, 3.18 seconds in the 4×400 relay capped day two of the Tyson Invitational as the Razorbacks broke a mark set in 1985.

Another highlight came in the 800m as Kieran Taylor won the race in a career-best 1:47.12, which is No. 5 on Arkansas’ all-time list, while four other teammates also set career best times with the Razorbacks finishing 1-2-4-5-9.

“The 4×400 was just amazing,” Arkansas associate head coach Doug Case said. “Broke a school record from 1985 with a 3:03. Really proud of these guys and the way they competed and raced.

“We were confident Ayden would run a really good step for us, but I didn’t think he would split 45 down. He really showed up and is a great competitor. We just had a great day, it was fun.

Razorback’s previous record on a 200m track was a then collegiate best of 3:03.50 set at the 2013 NCAA Championships. The current Hogs also improved on an all-conditions mark of 3:03.34 set on an oversized track in altitude in Flagstaff, Arizona in 1985, which was anchored by Roddie Haley.

“It’s huge to break such an old record and we knew if all of our best guys were in the relay we would run a fast time,” said Benson. “It’s amazing. It was a great race with Florida, Iowa and Tennessee having really good times. It was our first time racing with this group of guys, so competing against teams like that’s huge.

“Being the anchor leg means the world to me. I had to deal with injuries at the start of the indoor season, so the fact that everyone still has that faith in me based on what I did in October is huge, just knowing that I had the chance to help my team.

“Before this 4×400, I told the guys this is a race you’re trying to win,” Case said. “Everyone is going to run fast, so you’re just trying to win this thing. It’s just about competing at your highest level, and they’ve done a great job. I was really proud of them.”

“The day started really well, this 800m really opened things up and we felt that momentum flowing,” Case said. “This is the meet where our season starts to go into championship mode. We were trying to run fast this weekend. Those 800 guys did a great job and our top two should be top 10 in the NCAA and we had four guys under 1:50.

Leroy Russell followed in 1:47.89, which ranks him No. 11 on UA’s all-time list, as a runner-up. Tennessee’s Alex Kay was third in 1:49.02. Razorbacks Ricardo Banks (1:49.08) and Jadon Bartholomew (1:49.22) placed fourth and fifth in separate runs. Banks won his section while Bartholomew finished fourth in the same run with Taylor and Banks. Ethan Carney added a career-best fifth for the Hogs with a 1:50.74 that placed him ninth.

Before the relay, Washington set a career best 21.03 in the 200m to finish fifth. Very little space separated the first five times of the event. Jacory Patterson of Florida won in 20.91 and was followed by Emmanuel Bynum of Tennessee (20.95), Dorian Camel of LSU (21.00) and Ryan Willis of Florida (21.01).

Razorback rookie Ben Shearer narrowly missed a sub-4 mile placing third in a career-best 4:00.18 to better his high school indoor record of 4:19.05 as well as his outdoor record from 4:07.40. Martin Prodanov of Missouri won in 3:58.72 while Dais Malebana of Nebraska was second in 3:59.88. Luke George finished second in another section with a time of 4:12.15 to rank eighth overall.