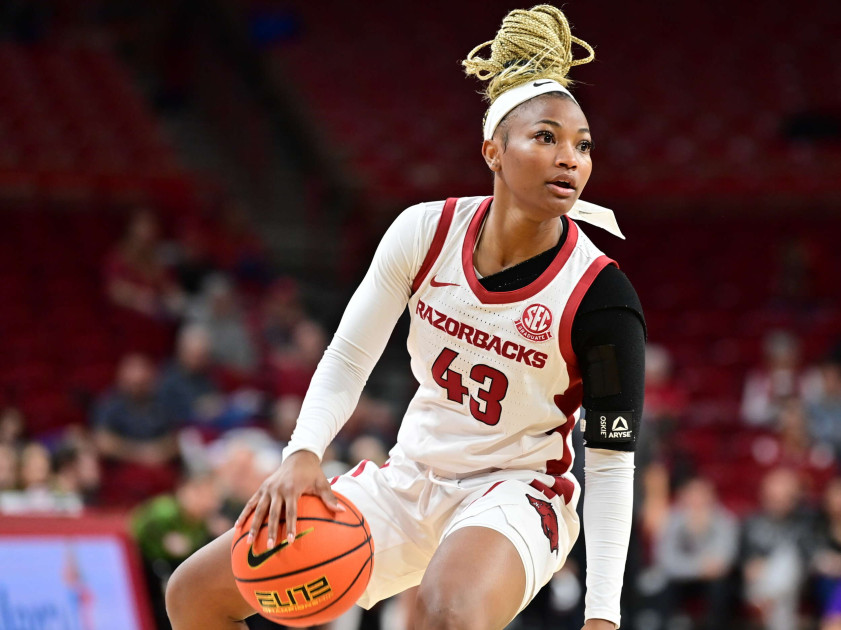 FAYETTEVILLE- In front of an energetic and noisy crowd of 7,410, Arkansas Women’s Basketball (2-0) shone in their home opener with a 72-34 victory over Central Arkansas (0-2). On the first day of elementary since 2019, crowds filled with screaming local school kids and Hog worshipers hit the top 15 for best home attendance in program history. Erynn Barnum led the way with a near double-double of 19 points and nine rebounds, while going 9 for 9 from the free throw line.

The Razorbacks started the game with turnovers on their first two possessions, allowing UCA to get on the board first after going 2-for-3 from the free throw line. That lead taken by UCA was their only of the game, as Arkansas led for the remaining 39:09 of the contest. To kick off the Razorbacks’ offense, Makayla Daniels fed Barnum under the basket, then Daniels made his own layup, as Arkansas led 8-3 at media timeout caught with 4:32 left in the first. quarter. Although it took Arkansas a while to get going offensively, UCA had a harder time as the Sugar Bears didn’t score a basket until 3:36 left in the first quarter. Jersey Wolfenbarger recorded a 3-pointer at the buzzer to put the Razorbacks up, 16-9.

Arkansas collected its first four points of the second half on free throws. Carr helped the Razorbacks extend their lead to 26 points on a 3-pointer with 6:44 left in the third. Off the bench, Maryam Dauda began to warm up, making a layup, as Arkansas led 48-20 with 4:27 left in the frame. Arkansas outscored UCA 17-10 in the third quarter to lead 52-24 going into the final 10 minutes of action.

UCA opened the fourth quarter with 3 straight points, but still trailed 54-30 with 9:02 left in the game. Saylor Poffenbarger showed she could defend too, racking up back-to-back blocks to then set up Langerman for her second 3-pointer of the game. Barnum began to warm up, scoring nine of his career-best 19 in the fourth. Arkansas won 40 points on a Wolfenbarger layup with 56 seconds left, but UCA managed to break their nearly seven-minute drought with less than a minute left. Arkansas still picked up a 72-34 win.

Arkansas will continue their homestand, as the team hosts Tulsa on Monday, Nov. 14 at 7 p.m.

Off the Dribble: Arkansas moves past Fordham