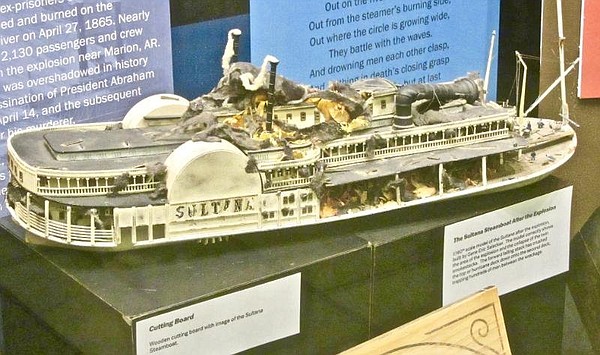 A new exhibit at the Arkansas State Capitol provides insight into plans to create a spacious, state-of-the-art museum in Marion, detailing the deadliest maritime disaster in US history.

Four display cases filled with artifacts on the ground floor of the Capitol depict the pre-dawn Mississippi River explosion, burning and sinking of the steamer Sultana half a dozen miles north of Memphis on 27 April 1865. Most of the 1,169 men now estimated to have died were Union soldiers repatriated north to their homes in the Midwest from Confederate prison camps.

Governor Asa Hutchinson recently opened the Little Rock exhibit as part of the fundraising effort for the 17,000 square foot Sultana Disaster Museum project. Occupying the Marion High School gymnasium built in 1938, it is said to be nearly 20 times larger than the temporary museum that opened in this Delta town in 2015.

Until a few years ago, the disaster was widely believed to have claimed up to 1,800 lives, even more than the 1,512 lost when the British ocean liner Titanic sank in 1912. Latest research has drastically reduced the toll even further appalling, which remains the highest ever recorded in US waters.

The temporary Sultane Museum in Marion remains open, with exhibits that include a 14-foot-long model steamer. But the Crittenden County seat is at least a two-hour freeway drive from Little Rock, while the new state capitol exhibit is a short drive from central Arkansans.

Visitors to the Capitol get a full timeline of the disaster, starting with the gross overloading of the steamer. The 265-foot-long Sultana, with a legal capacity of 376, was heading north from Vicksburg, Mississippi, carrying 2,200 or more passengers and crew. One theory is that a Union officer had been bribed to significantly overload the ship due to federal per capita payments for transporting released POWs.

It should be noted that the captain of the Sultana, Frederic Speed, was the only officer court-martialed after the tragedy: “After a six-month military trial, he was found ‘negligent in his duty to the detriment of good order and military discipline “. The verdict was overturned and he was later honorably acquitted.”

An information board at the State Capitol explains that the Sultana had docked in Vicksburg to fix leaking boilers. But one or more boilers exploded in the middle of the night, instantly killing hundreds of passengers. Many more jumped into the cold waters of the Mississippi to die of drowning and hypothermia.

An unlikely method of survival by one soldier is described in a panel showing his photograph: “The crew of the Sultana had a pet alligator which they kept in a large wooden crate. During the disaster, Private William Lugenbeal, Co. F, 135th Ohio Volunteer Infantry, killed the alligator and used the sturdy wooden crate as a lifeboat to escape from the burning vessel.”

Another panel bears the title “The end of the world”. The text claims that “even though the Sultana happened more than 150 years ago, the story of greed, impatience, coming home, hope and fear is stronger than ever. And once heard, impossible to forget.”

Somehow, the disaster was mostly forgotten until the last decade or so, even in Arkansas. It was not until civic efforts in and around Marion led to the opening of the current small museum that knowledge of the Sultana began to grow.

Some viewers of the State Capitol exhibit will find the tragedy hard to forget. When the new Sultana Disaster Museum opens in Marion, they can head to Crittenden County for what promises to be an immersive museum experience.

Sultana at the Arkansas State Capitol