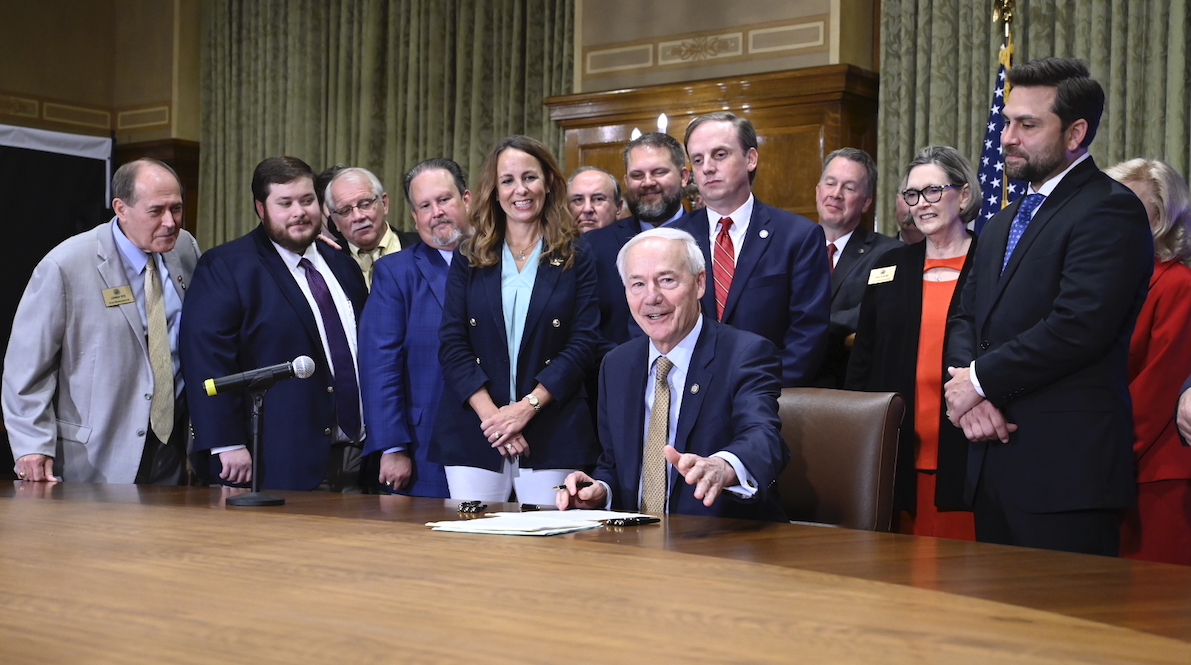 Republican lawmakers gathered in the governor’s boardroom Thursday afternoon to celebrate the quick and easy passage of a tax cut bill that will deliver $450 million in cuts primarily to the highest earners in the state. Governor Hutchinson also signed legislation providing $50 million for a grant program that schools can use to make campuses safer.

The bill signing ceremony marked the end of a fast-paced special session that Hutchinson convened this week.

What does Arkansas’ personal income tax rate drop from 5.9% to 4.9% mean? If you don’t already know, it probably won’t affect you at all. The plan won’t do much for people earning less than $40,000 other than give them a $150 credit for any taxes owed. If you owe no taxes or owe less than $150, you will not be able to claim the full credit. And in a state where the median income is $26,000, that means most people won’t notice any difference.

Still, Republicans trumpeted the cut as a big win, a culmination of Governor Hutchinson’s quest to cut taxes during his tenure. Their celebratory mood didn’t seem to be dampened even a bit by reporters’ questions about why lawmakers refused to use part of the state budget surplus to raise teachers’ salaries. Arkansas’ teachers’ starting salaries rank 48th and our teachers’ average salary ranks 46th out of the 50 states.

Educators and their supporters across the state have been voicing the need for increases in the weeks leading up to this special session, and Democrats (joined by some Republicans) made a last ditch effort yesterday to at least get teachers to vote. The supermajority Republican Legislature instead voted to adjourn this morning, leaving Arkansas teachers out in the cold.

Hutchinson said during his bill-signing ceremony that he hoped lawmakers would consider teacher increases in 2023, but he made no promises.

A group of lawmakers, all white Republicans and just three women, beamed as Hutchinson won his tax cut victory lap.

“We have lowered the income tax rate from the highest it has ever been to the lowest, while increasing our state reserves from zero to $2 billion,” he said.

Hutchinson said he accomplished this through “a smarter, leaner state budget.” In fact, the influx of federal money for pandemic response in recent years has given the state an unprecedented financial cushion. Is it just a coincidence that the state amassed this surplus while simultaneously accepting mountains of federal cash? Or could those federal dollars have offset some regular state spending, leaving the Arkansas government much more abundant than usual? Republican proponents of tax relief say that federal money and state surplus are not linked, or at least no one can prove they are linked, which is just as well. Let’s hope they’re sure, because funneling federal pandemic relief money to wealthy taxpayers would attract significant penalties.

While Republicans in suits in the Governor’s Boardroom celebrated today, there’s not much from this week’s Special Session for most of us to cheer about.

A $50 million slush fund for the gun-loving governor and his hand-picked school safety commission to spend on school safety measures could easily go to the side, especially as lawmakers of Arkansas made the unusual decision this week to allocate that money without any rules or guidance on what it can be spent. But we won’t know until at least October, when the School Safety Commission releases its final report. If the draft report is any indication, however, the state government will soon pressure, even demand, an armed presence on every school campus, despite the lack of evidence that it would make anyone safer. And now there just so happens to be a $50 million fund to make it happen.

And new tax cuts, opposed by Arkansas child and family advocates who say the money is desperately needed to improve the lot of our state’s suffering children, will of course do little or nothing to supercharge Arkansas’ economy. We are a poor state, and by diverting funds that could go to education and social services to build a stronger workforce, that is unlikely to change.

By kowtowing to the richest people in the state and ignoring the undeniable teacher pay crisis, this short and guilty special session leaves Arkansas worse off than last week. As usual, it is our children who are wronged.

Rep. Vivian Flowers of Pine Bluff watched the speeches and the signing of the bill from a chair near the door, the only Democrat in sight. Lawmakers who voted to adjourn rather than stay to consider raising teacher salaries must answer for their inaction, she said. “No matter where you sit politically, people sit on their hands,” she said.

Democrats’ hopes to use this special session to raise the pay of educators, allow some exceptions to the state’s abortion ban, and pass an alternative tax plan that would send more benefits to low-income people are completely annihilated. So what’s the next step? “Elections are next,” Flowers said.