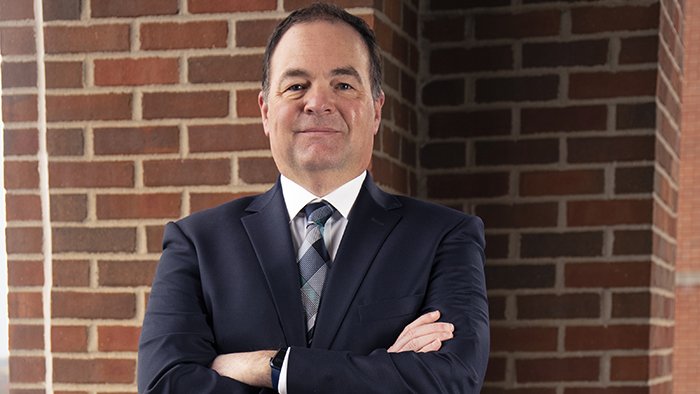 In the foyer hangs a massive wooden plaque dotted with brass plaques indicating the group’s direction over the years, while here a framed document bears the names of the founding overseers. The names inscribed here, a who’s who of Arkansas business legends, are punctuated by corporate titans of a class all their own, including Rockefeller, Tyson and Stephens.

A short stride from yesterday brings you into the boardroom and onto a balcony where you encounter the sights and sounds of tomorrow, as construction workers hammer and bang at street level beneath residential buildings of a new sparkling downtown. Here, from a bird’s eye view, the view is as spectacular as the vision the 65-year-old ACC has implemented, investing and enabling businesses in the neighborhood and across the state to build their own coming.

Framed by this backdrop, Sam Walls III, the new CEO of Arkansas Capital Corporation, leans back in a chair and ponders his road to this moment. Twenty years ago, Walls, educated at SMU and UA Little Rock’s Bowen School of Law, was just another corporate lawyer with a sharp suit, a sharper office suite and a lack of purpose. in what he was doing. Since then, after jumping into the company’s job with both feet in 2003, he’s spent decades working in the noble pursuit of providing services and connecting resources to help startups scale.

Now, after six years as President and COO, the helm is entirely his to keep the organization relevant through changing times and economic evolution. It is a mission, once again, that draws on the blended wisdom of the ages and the echoes that form its hallmark of leadership.

“During my Catholic high school years, [Principal] Father George Tribou always said, “Bad things happen because good people allow it. It’s still stuck with me,” Walls said. “My dad, he had a bunch too. The one that stands out the most is: “Activity begets activity”. In other words, even by doing the little things, you get momentum. And conversely, if you don’t have it, the inertia won’t be there.

“I use a lot of analogies. Movies and sports, I beat people to death with them. You know, ‘Go hit some home runs’, ‘Let’s play a little ball’, ‘Let’s put some singles in there. ‘”

“There’s one I adopted just around COVID. They’re sick of me saying it here, but it’s a quote from Sun Tzu: “In the midst of chaos, there is opportunity. So even when COVID was unfolding, it was like, here’s our moment of chaos, let’s find the opportunity. Where can we be relevant, have an impact and do it in a financially sensible way?

“That’s the key word, relevance. Our recently retired CEO, Rush Deacon, said it a lot. “How are we competitive? How are we relevant? It is an evolving process with what is happening in the world. Where are these gaps? Can we help fill these gaps? I think in the culture of the company, we have to constantly reassess what our role is in this crazy world and how we can best deal with it.

Arkansas Capital Corporation was born out of this kind of transformative thinking. In 1957, a group of influential businessmen and state utility officials came together with the simple but monumental goal of creating a way to support business growth and development. While this seems relatively innocuous in 2022, what the men were proposing was much more complicated in 1957, because what they were really envisioning was a financing mechanism to shift the very economic backbone of the state from a system based on agriculture to a system based on industry.

The company that emerged from these talks – originally the First Arkansas Development Finance Corporation (FADFC) – has grown and diversified considerably. But Arkansas Capital still boils down to helping connect new and existing businesses to financing through partnerships with commercial banks, small businesses, and others in the private and public sectors to maximize its lending and project finance products. .

Over its history, the organization has trained thousands of people and granted hundreds of loans, representing projects worth more than $500 million. Additionally, it has deployed, through its project finance partners, more than $2.34 billion in capital for small business and economic development projects.

And yet, from time to time, the same nagging question continues to arise among leaders: “How can we do better? »

“You know that old country song, ‘I was country before country was cool?’ Well, I would say we were talking about entrepreneurship before entrepreneurship was cool,” Walls said. “Anyone who’s been around for 20 years would say the same thing.

Getting the conversation started early has given ACC a lot of new ground to plow. Walls recalls when the board gave him and his colleague Les Lane the task of helping grow the group’s impact outside of the fundraising arena in a way that makes sense. and that produced results.

“We were effectively given the mandate to ‘Listen guys, there are loans, but what can you do on the other side of the spectrum, whether it’s financing projects or promoting entrepreneurship , on the education side? “Walls said. “We were given a lot of leeway in those boxes.

“Les and I were able to do things on promoting entrepreneurship and tax credits that really grew and developed that side of the business. And, as these things evolved and became stronger and stronger parts of the whole of ACC society, it brought with them other opportunities.

But among the victories — from business plan competitions that begin today as early as fifth grade and continue through college to the founding of the subsidiary Pine State Regional Center, which in 2014 became the only program in Investing for Arkansas-Based EB-5 Immigrants – There Were Notable Misfires.

The company has always been a bit hesitant to tout its successes or even the breadth of its program offerings, hampering its brand awareness and effectiveness. Along with that, there has been a lag on issues that drive diversity into the marketplace, two things Walls plans to accelerate in the coming years.

“I would admit our role up until maybe four years ago had been more passive,” he said. “By that I mean, we were here and if you were an underserved group – whether it was women, Latinos, African Americans – and you were in trouble, someone would end up saying, ‘You should go talk to ACC. And then we would work very hard to understand your problem.

“Today you look at the world and some of the things that are going on – Black Lives Matter, George Floyd and all that – and you have to consider what long-term systemic issues exist. We started asking the question, “What are we really doing proactively to address these issues?” The difficult answer for us was that we weren’t as proactive as we should have been. If you and I were talking five years from now, I wish I could point to more ways we’ve had an impact in those particular areas.

Managing the future of entrepreneurship in Arkansas is a complicated process, but for Walls, the fundamental issues boil down to a few very simple lessons learned from his father, C. Sam Walls Jr., an entrepreneur who will serve ACC for 24 years before retiring as CEO. in 2013.

“My parents were entrepreneurs. They were running a hardware store,” Walls said. “I grew up watching the struggles of small business owners. I was very observant in the back seat of the car and listened as they discussed these things. And those are the things that made my father who was very good at what he did and who really made him the right person at the right time in the history of this company.

“Today we face challenges and ask the same questions, about broadband, about training the workforce and about capital. The state has really stepped up its game over the past 10 years around some of these issues, but we have to keep asking ourselves, “Where could we do more?”

“I think the long game is always what we do in education, and unfortunately it’s something you don’t fix overnight. But at least we’re talking about it, which is a good start. As a state, I think we are going in the right direction.