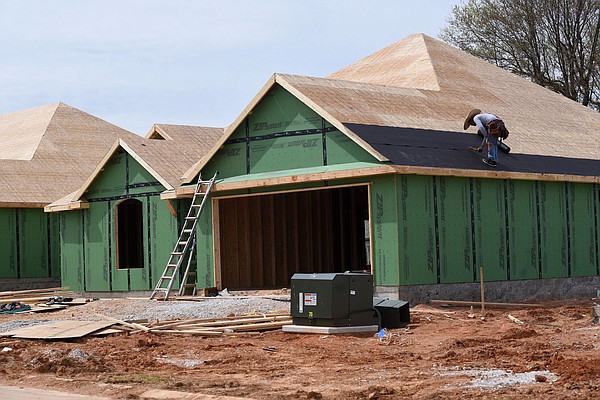 “It threatens a central pillar of your economic life,” Richard Florida, a University of Toronto professor specializing in urban studies, told a crowd of about 150 at Thursday’s annual council meeting. An “incredible quality of life” coupled with relatively low housing prices compared to other desirable and growing locations in the United States is one of the area’s main attractions, he said.

The council is a group of business and community leaders who deal with regional issues. During the meeting, Florida presented the board’s strategic plan for this year through 2026, a strategy he helped craft.

Real estate figures show the fastest growth in Kansas City, Missouri, at 32.9% from May 2021 to May 2022. Northwest Arkansas surpassed the second highest area of ​​Tampa, in Florida.

Housing prices have risen 43% over the past five years in Benton County and 47% in Washington County, Florida.

“You can choke on your own success,” Fayetteville’s Jeff Koenig said after Thursday’s meeting, which took place at the Ozark Highlands Nature Center in Springdale.

The council hired Duke McLarty in November as executive director of the council’s Workforce Housing Center to specifically tackle the housing problem. Council has made affordable housing a priority at past meetings. They were right to do so, but regional action is now urgently needed, Florida told them.

“You are at an inflection point,” he said. “You cannot hesitate.

Options considered by the council and area cities so far include convincing investors to offer a wider selection of housing and financing options, from townhouses to condominiums to single-family homes. Financing options could include private funds to bridge the gap between what a working family can afford and what it costs to buy a single-family home.

Northwest Arkansas needs a regional housing fund, the strategy document says. Such a fund combines public and private investments to support affordable housing developments. The region needs to consider options other than directly reducing the unit cost of a living unit, such as making neighborhoods more bike-friendly and having more charging stations for electric vehicles, the strategy document says. Building homes further and further away from employment centers raises transportation costs, which is a major factor in an area’s overall living expenses, the plan says.

There are groups of investors who want to include affordability in their portfolios, Florida said. For example, some apartment complexes have 80% of their units at market price and 20% reserved at a lower, more affordable rate. The community cannot continue to thrive without a place where teachers and emergency medical technicians can afford to live, he said.

Beyond the price of housing, the area needs to be safe and maintain the quality of life that drives people to want to move here, Florida said.

“He validated the thing that keeps me up at night,” said Mayor Greg Hines of Rogers, who also attended the meeting. “I don’t want to be sitting in a restaurant 20 years from now and people asking me why I didn’t help get this thing under control while I was in power.”

Besides housing, the council’s new plan lists four other priorities. These are:

• Continue to focus on developing, attracting and retaining diverse talent.

• Increase efforts to support the innovation economy and an entrepreneurial environment.

• Continue to build on the Northwest Arkansas brand as a vibrant, thriving, promising, and inclusive community that provides a high quality of life for all.

“No other organization can easily address so many areas as the region develops,” the plan says.

“I don’t talk politics much, but as state governments become more aggressive in the social sphere, and it goes both ways, you need to maintain your reputation as a fair and open-minded place to live” , said Florida.

“People who don’t feel included will go,” he said. “It’s not about sensitivity training. It’s about economic development.”

Another speaker at Thursday’s meeting was Austin Booth, director of the state Game and Fish Commission. The state wants to open a world-class recreational shooting range in northwest Arkansas, he told the crowd, but land costs are high. Therefore, the commission will tailor a detailed request for proposal listing its requirements and see if a public or private group, or a combination, makes the commission the most attractive offer, he said. Expect the proposal in August, he said.

Any mention of a shooting must address the issue of gun violence, with mass shootings in Uvalde, Texas; Buffalo, New York; and Highland Park, Illinois, so far in 2022, Booth told the group.

“We have to shoot out of darkness and loneliness and into daylight,” he said. “When people leave, they need to see others in their communities with them.”

Doug Thompson can be reached by email at [email protected] or on Twitter @NWADoug.