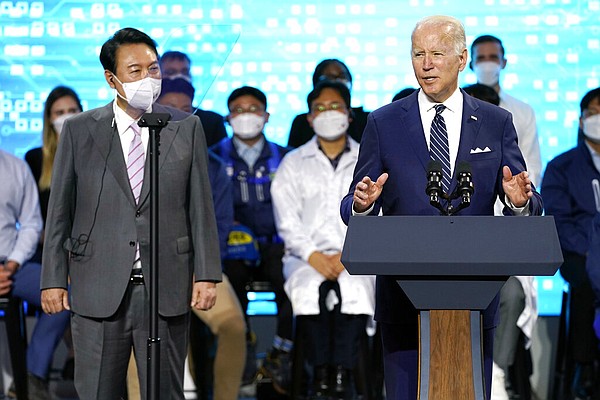 PYEONGTAEK, South Korea — President Joe Biden opened his Asia trip on Friday by visiting a South Korean computer chip factory that will serve as a model for a factory in Texas, presenting it as an illustration of how deeper ties with the Indo-Pacific can fuel technological innovation and foster vibrant democracies.

“Much of the future of the world is going to be written here in the Indo-Pacific over the next few decades,” Biden said. “Now is the time, I believe, to invest in each other to deepen our commercial ties, to bring our people even closer together.”

Biden’s message focused on promising a better global future, but also spoke to American voters amid domestic political challenges — such as inflation driven by chip shortages — as he attempts to show that his administration is up to the job of the economy.

The Democrat’s first visit to Asia as president came as a poll released Friday by the Associated Press-NORC Center for Public Affairs Research found Biden’s approval rating in the United States at 39 %, the lowest of his presidency. The survey also revealed growing pessimism about the economy and the state of the United States, especially among Democrats.

Samsung, owner of the chip factory in South Korea, last November announced plans to open a $17 billion semiconductor factory in Texas. A shortage of semiconductors last year hurt the availability of automobiles, kitchen appliances and other goods, driving up inflation around the world and crippling public approval for Biden among US voters. . The president noted that the Texas plant would add 3,000 high-tech jobs and construction would include union labor.

“These little chips,” Biden said after touring the factory, “are the key to propelling us into the next era of humanity’s technological development.”

The president seeks to promote greater business collaboration among democracies with overlapping values, seeing it as a way to maintain the benefits of a globalized economy in a way that benefits American workers and leads to increased foreign investment in United States. He is due to appear in Seoul on Sunday with the chairman of Hyundai Motor Group to highlight the company’s decision to invest in a new electric vehicle and battery manufacturing plant in Savannah, Georgia.

Throughout his five-day visit to South Korea and Japan, Biden explains how a United States able to work with its closest allies will be stronger at home and abroad. In his remarks on Friday, Biden did not mention China, which has emerged as a major competitor to the United States, and he stressed the value of alliances that currently exclude that country.

South Korea’s new president Yoon Suk Yeol and Samsung Electronics vice president Lee Jae-yong greeted Biden at the factory. Yoon is a political newcomer who became president, his first elected post, just this month. He campaigned to take a tougher stance against North Korea and strengthen the 70-year-old alliance with the United States.

Before Biden spoke, Yoon said he hoped the U.S.-Korea partnership would grow into an “economic and security alliance based on cooperation in advanced technologies and supply chains.”

The chip plant showed off a bit of the unique nature of manufacturing, as visitors had to don white lab coats and blue slippers to help keep the facility clean. Biden and Yoon, who were not wearing protective clothing, watched a demonstration of the machinery.

At one point during his tour, Biden received a detailed explanation of a KLA inspection system on the Samsung factory floor. The California-based company is a major supplier to Samsung’s semiconductor business. After a worker named Peter explained the ins and outs of the machinery, Biden advised him “Remember to vote” when he returns home to the United States.

In closing, Biden swiped and thanked “Moon,” which was South Korea’s incumbent President Moon Jae-in, who held the position for several years prior to Yoon’s recent election. Biden quickly corrected the slippage.

“President Moon, Yoon, thank you for everything you’ve done so far,” Biden said.

Part of the computer chip shortage is the result of strong demand as much of the world emerges from the coronavirus pandemic. But virus outbreaks and other challenges have also caused some semiconductor factories to shut down. US government officials have estimated that chip production will not reach the levels they would like until early next year.

Global computer chip sales totaled $151.7 billion in the first three months of this year, a 23% jump from the same period in 2021, according to the Semiconductor Industry Association.

More than 75% of the world’s chip production comes from Asia. This is a possible vulnerability against which the United States hopes to protect itself by increasing domestic production. There is $52 billion in government investments in the sector in a bill being negotiated in Congress.

The risk of Chinese aggression against Taiwan could eventually cut off the flow of high-end computer chips needed in the United States for military equipment as well as consumer goods. Similarly, hermetic North Korea has been testing ballistic missiles amid a coronavirus outbreak, a possible risk to South Korea’s manufacturing sector if the precarious situation worsens.

In terms of chip production, China leads the world with a 24% share, followed by Taiwan (21%), South Korea (19%) and Japan (13%). According to the Semiconductor Industry Association, only 10% of chips are made in the United States.

Samsung announced the Taylor, Texas factory in November 2021. It hopes to begin operations in the second half of 2024. The South Korean electronics giant chose the site based on factors including government incentives and the “readiness and stability” of local infrastructure.

The White House said in a fact sheet that semiconductor companies have announced nearly $80 billion in U.S. investments through 2025. That includes $20 billion for Intel’s factory in outside Columbus, Ohio, up to $30 billion by Texas Instruments, a $1 billion expansion by Wolfspeed in New York, and investments from Global Foundries and SK Group.

Arkansas is one of six understated states for the 2020 census