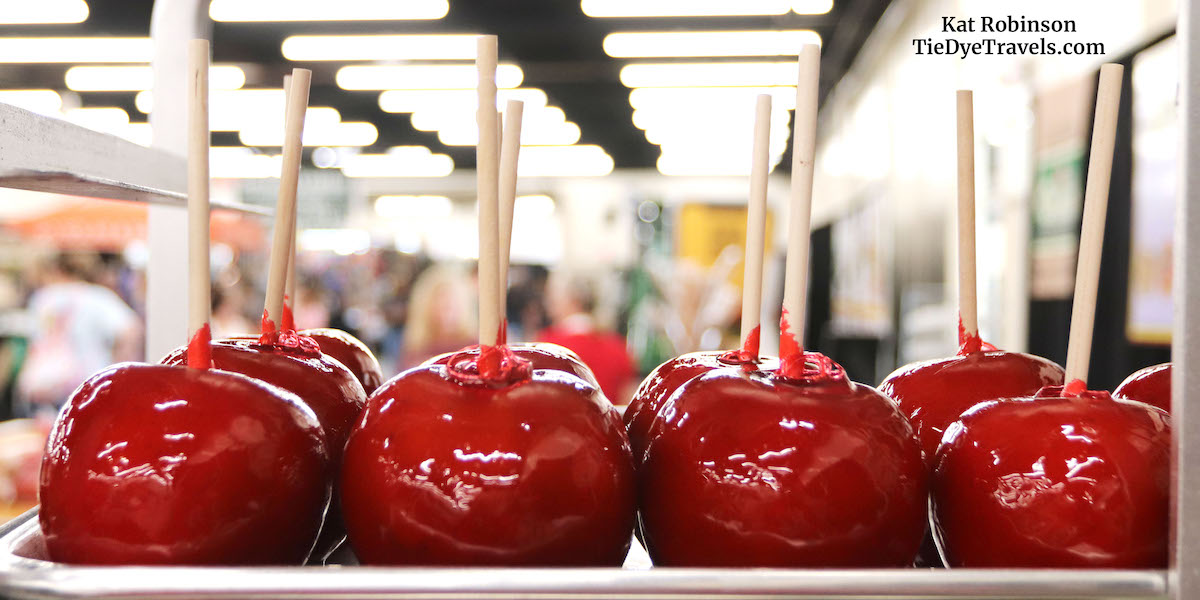 Autumn is here, extremely dry leaves are falling, the weather is getting wonderfully cool, Halloween is just around the corner, so that must mean the Arkansas State Fair is here. From October 14 to 23, you can get your fair share of food and ride the Gravitron 15 times in a row. Or if you’re like me, spend countless amounts of hard-earned money trying to hook a ring attached to a stick to the rim of a glass bottle and swing it from lying down to standing up. The game is Bottle Up and it must be conquered at all costs.

Arkansas food historian and author Kat Robinson has been covering State Fair food for 15 years. Yesterday she released her 2022 Arkansas State Fair Food Guide where she announced the shocking revelation that the fair will be serving Pepsi this year instead of Coke. Pepsi float, anyone?

The Arkabsas State Fair will sell Pepsi products instead of Coke products this year. Of course, hand-squeezed lemonade, fruit punch, and iced tea will still be available, along with Hiland milk and black coffee. pic.twitter.com/ZIDWjWgxDf

We called her to see what was new this year. Bookmark her guide as she updates it as needed, and she’ll add to it after exploring the medium on Friday.

The following has been edited for length and clarity.

How long have you been covering the fair?

Fifteen years of going out and doing research. I’ve had ties to the fair since I was a kid, and we used to do live action whenever I worked on TV. But in the last 15 years since I started writing about food, I’ve covered the State Fair, and it’s been interesting to see how that’s evolved.

What has changed over the years?

When I started, the most unusual things you had was Paizi Gyros, which has been a staple for decades now. They might have had an unusual funnel cake, but in 2007/2008 there really wasn’t a lot of weird food there. The first weird item that was introduced at the Arkansas State Fair came in 2008 and it was called the Pig Licker. It was literally chocolate covered bacon and people lost their minds. … It really is a local flavor here. I love how it’s evolved, especially because we’ve gone from years of everything being fried and covered in chocolate to something much more reasonable.

There are local operations like the Arkansas Cattleman’s Association that will be running the Midway Cafe this year, which is a permanent structure at the end of the pigsty at the end of the midway. This year, the focus will be on steak. In fact, the steak sandwich, they say they pronounce it the same way. [From Robinson’s guide: Steak Samich (you gotta say it that way) — a four ounce steak cooked to medium on a bun with caramelized onion, cheese and a special horseradish sauce. It comes with a side for $12.50.]

We have vendors throughout Arkansas, but we also have out-of-state vendors. We have a few new vendors coming in and I think they will be very well informed. One of them is Bryan’s Sirloin Tips – they’re out of Indiana – and the other is Happi Lao, which is a Laotian food truck from Iowa.

Where do I send surly co-workers or righteous harassers who dismiss Fair Trade food as bad or unhealthy, but have a limited sample size due to their opinions from 15 years ago?

You have places where you can eat roasted fresh corn, you can get baked potatoes or grilled chicken. There are a variety of salads and different types of street tacos. It’s healthier than before. And I’m not saying the fair is a healthy pursuit. … It’s a matter of moderation though. But even something like a roast turkey leg isn’t a bad thing in moderation, so maybe grab your turkey leg when you walk out of the fair and slice it up and share it with the family because ‘it’s big enough to be shared with the whole family. Unless you go to H2Que and get yourself a Mac and Cheese Stuffed Turkey Leg.

This is also an opportunity to support Arkansas vendors. Pat’s Kitchen and L&M Concessions and Swaim’s Pizza on a Stick – these are all local people doing their best to make a living, and it’s one of their biggest paychecks of the year. How their season goes can make the difference between whether it rains or not and how many people attend.

We also live in a very different food culture. I mean, 2007 really was the forefront of a new culinary era here in Arkansas. That’s when we started seeing our organic farms, the Arkansas Certified Farmers Market, and the Pulaski Tech Culinary School. You have Brightwater [A Center for the Study of Food]. You have different places where people are educated and you have a whole class of cooks who have come and shown us all the things we can do with food. So a lot of people think of the state fair as a very rural, time-trapped nostalgia experience, but you can get dishes at the state fair that bring Arkansas-specific nostalgia like cheese dip. in Arkansas. You can’t call it Mexico Chiquito anymore, but it’s the same cheese dip they served whenever the Big Show Diner was a real Mexico Chiquito outlet in the 1980s. fruit from the Arkansas State Fair. You can go to the Arts and Crafts building and have a glass of Post Familie wine and a fried pie made by a grandmother who lives nearby.

What’s your meal at State Fair?

My usual go-to is Pat’s Chicken, where I get an Indian fried bread taco. I get it on the way out, it’s two or even three meals of food. Fresh tomatoes and onions, homemade salsa on freshly baked fried bread. Wish we had more fries around Arkansas, that would be absolutely awesome. If you want to be cheap but healthy, get milk from Highland Dairy at the top of the hill. I believe they are still school size cartons for 0.50 cents each. Even if they increase it to a dollar, it will still be the cheapest thing you can get on the fairground.