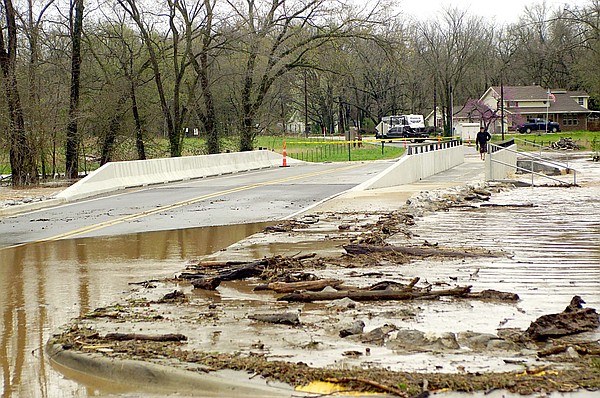 Storms cause flooding and blackouts in northwest Arkansas

The Highfill Fire Department responded to a water rescue near Arkansas 264 and Bryant Place at 10 a.m., according to a Benton County news release. Two occupants were rescued with no injuries reported.

The forecast today is sunny with a high near 65, but rain could return to the area this weekend, according to the weather service.

Elsewhere in the state, a woman died Wednesday when a tree fell on a mobile home in Cleveland County. High winds and flash flooding damaged properties in the central and southeast parts of the state.

Almost all of the tree damage was caused by straight-line winds or ground saturation, except for a possible funnel spotted in Mississippi County in the late afternoon, according to the National Weather Service at North Little Rock. Another possible funnel was spotted near West Memphis, but little to no damage had been reported in the area by late evening, the weather service said.

Cleveland County Emergency Manager Stephen McClellan said the Cleveland County Sheriff’s Office received a report around 4:40 p.m. of a victim trapped by a tree in the 300 block of E. 6th St. in Rison .

Personnel from the Sheriff’s Office, Emergency Management Office, Rison Fire Department and an ambulance responded to the scene and found the victim, a 20-year-old woman, dead.

McClellan said the woman had been married for a month to the day.

McClellan said the wind had already started to slow down by the time the tree fell. He said it’s possible the ground was so saturated that the wind knocked the tree down.

Numerous trees were reported in Cleveland County after storms rolled through south-central Arkansas, McClellan said. He said the county roads department was working to cut down trees that were blocking roads.

Fallen trees also caused damage in other parts of the state, including the Little Rock area, which saw straight-line winds reaching up to 70 miles per hour, according to National Weather Service officials. .

No animals or people were harmed during the storm, Altrui said.

“That’s what’s great about our staff. They respond very quickly,” Altrui said. “We actually plan and do weather drills like this. We’re lucky we didn’t hurt any animals or humans.”

The zoo sent out a statement Wednesday with a photo of staff waiting for the storm inside with penguins running around an enclosure.

A toilet opposite the zoo’s tiger habitat suffered significant damage, Altrui said. A covering on the amphitheater was also destroyed and the reptile house had a hole due to a fallen tree.

Most of the damage to buildings and fences occurred in general service areas and did not damage any animal habitat, she said. Altrui said staff will need time to clear trees, including some that cross driveways.

Fallen trees will be cut down and used to enrich animal habitats at the zoo, Altrui said.

“Our bears will be getting new furniture in their habitat,” she said. “They will have new things to play with.”

Another Arkansas attraction was also damaged when the storm hit a Crittendon County home that was used in John Grisham’s 2003 film A Painted House, according to a tweet from the Department of Emergency Management. Arkansas.

The social media post showed photos of the house with parts of the sheet metal roof peeling off. The house was moved to Lepanto by a local family and used as a museum.

According to the CALS Encyclopedia of Arkansas, the house was designed for the film to use as a prop.

There were also reports of a business being damaged in Osceola, Mississippi County, according to Emergency Manager Wayne Reynolds. He said two schools that are no longer in use were damaged in Etowah and Dyess.

Reynolds said Wednesday night that deputies from the Mississippi County Sheriff’s Office were driving around the county to assess the damage.

Wednesday’s weather followed an eventful night of storms on Monday.

The National Weather Service confirmed that four EF-1 tornadoes touched down in Sebastian, Franklin, Logan and Faulkner counties on Monday, causing minor damage in each of the counties.

In some places, hail the size of golf balls and softballs caused greater damage.

Emergency officials also said flash flooding was a concern across the state on Monday and Wednesday.