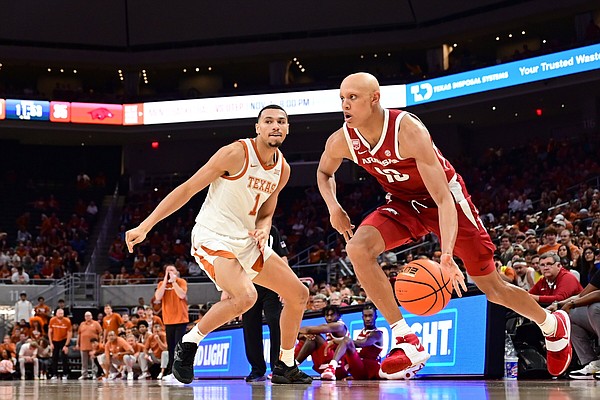 AUSTIN, Texas — University of Arkansas basketball coach Eric Musselman predicted a few weeks ago that the Razorbacks would have some eye-opening experiences this preseason and early in the regular season.

They had their first Saturday at the Moody Center against No. 12 Texas.

Arkansas, the No. 10 preseason team in the Associated Press top 25, lost 90-60 to the Longhorns in a much-anticipated showdown between the longtime rivals. Texas took an early 5-0 lead and never trailed.

“We have 11 new guys, so obviously we’re going to be a work in progress. How far that work in progress goes, I don’t know,” Musselman said. “But it’s a great game for us. It’s not that we played well.

“We’ve played as badly as 40 minutes of basketball since I got involved in college basketball.”

In the opening 18+ minutes, the exhibit was competitive. The Razorbacks hadn’t led, but the Longhorns’ biggest lead was seven points.

Arkansas was trailing 22-21 when Nick Smith completed a three-point play on the first possession after the media timeout of less than 8 minutes.

But a late 7-0 run capped by a left wing three-pointer from Texas guard Tyrese Hunter swelled the lead to 40-30 at halftime. The Longhorns hit 5 of 9 three-pointers before the break.

“It’s hard to get a lot of separation in 17 minutes,” Musselman said. “We replaced more than we will, obviously, in a regular season game, but [Texas] Coach [Chris] Beard’s team showed great tenacity tonight.

“I thought they climbed all over the offensive boards early in the game. I think they set the tone.”

After a Smith layup with 16:03 remaining, the Longhorns had 20 straight points to extend their lead to 69-35. Texas made 3 three-pointers during that streak, including one to make it a 30-point game.

“It happens in practice,” Musselman said. “When a team gets up, the momentum continues. It’s something we have to overcome, even in training.

“It’s really not characteristic of the way we’ve been, to not have competitive stamina when someone comes up to you and goes on a goal run.”

Against Texas length and ball pressure, Arkansas struggled with defensive turnovers and rebounds. The Razorbacks committed 23 turnovers, including 12 in the first half, and the Longhorns turned the errors into 26 points.

Texas also grabbed 13 offensive rebounds. Six of the Longhorns’ first nine rebounds came from their own misfires. They made 10 of 16 three-point attempts in the win, including 5 of 7 in the second half.

Musselman said he wants the Razorbacks to limit their turnovers to 9 or fewer, allow 5 or fewer three-pointers and 9 or fewer opposing offensive rebounds.

“All the goals that we’ve talked about over the last three years, none have been achieved,” Musselman said. “Hence the loss of 30 points.”

For Arkansas, freshman winger Jordan Walsh led with 14 points, including 12 in the second half, on 6-of-8 shooting from the floor. Smith finished with 12 points on 5-of-8 shooting in 28 minutes, and the Razorbacks were outscored by 34 with him on the floor.

Smith accounted for Arkansas’ lone three-pointer until 6:03 into the second half. Smith and Walsh had three of the Razorbacks’ four shots from beyond the arc, and freshman goaltender Joseph Pinion added the other.

Transfer forward Makhi Mitchell added 8 points and 4 rebounds off the bench, and Pinion had 7 points on 2-of-5 shooting. Mitchell didn’t score in the second half as he missed both field goal attempts. He finished 3 of 9 from the field.

Texas, which scored 50 points in the second half, put up five players in double figures. The Longhorns also held Arkansas to 40 percent shooting each half.

“I would say we played some really good basketball streaks,” Beard said. “You know, basketball is a running game. I think we did a really good job defensively to keep them within 30 points both halves.

“I was really proud of that.”

“It’s a pretty simple formula, but it’s hard to solve if you don’t do what you need to do against them.”

Arkansas is scheduled to open the regular season Nov. 7 against North Dakota State at Walton Arena. Tipoff is scheduled for 7 p.m. on SEC Network-Plus.