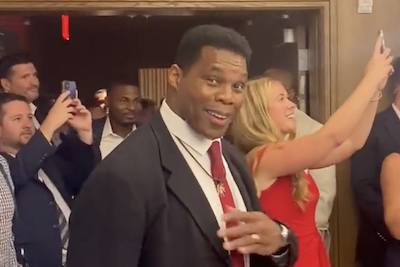 JD Vance, Herschel Walker, Dr. Oz – a bunch of unfit and weak characters. Running these candidates shows complete disregard for the voters. They cannot be trusted to hold power. They don’t take their oaths or their work seriously. Voters should be embarrassed to even see them appear on a ballot.

The big lie is now standard Republican procedure, not just for election results, where anything but a Republican victory is a steal.

Another example is the Republican chorus claiming that Herschel Walker won the debate last night with Senator Raphael Warnock.

Walker pulled out a fake badge to defend himself against his claim to have been a law officer.

He said he opposes an insulin price cap because people who depend on insulin should just eat better, ignoring the science that says millions of people need the drug no matter what. or their healthy diet.

He is a serial abuser who claims to be an example of law and order.

I could go on. He could still carry Georgia. Newt Gingrich said Walker won the debate and if you can’t believe Newt…

It’s the same party whose House Minority Leader claimed Majority Leader Nancy Pelosi failed to call for security help during Trump’s attempt to overthrow democracy on January 6. The video shows him standing watching his plea for help (and a worried phone call for the safety of Mike Pence, whom Donald Trump would have liked to see hanged.)

It’s the same party that voted for anyone, including Republicans in Arkansas, against Biden’s spending legislation they’re now touting for their district’s benefits and being spent like drunken sailors by the Arkansas Republican Legislature as it writes off income tax cuts for the wealthy.

It’s the same party with a candidate to oversee elections in another state that called for an end to mail-in voting, which it has used repeatedly.

It’s a party with people like Tom Cotton and Sarah Huckabee Sanders blaming global inflation (worse elsewhere than the US) on Joe Biden. His stimulus packages have strengthened the economy in many ways.

Every day another set of depressing headlines arrive about the endless lies and polls telling us that lies work.

What Jennifer Rubin said above is true. Not what that liar said.

Walker Herschel clearly scored a double win tonight. He proved he could argue for those who doubted and he pointed warnock decisively.