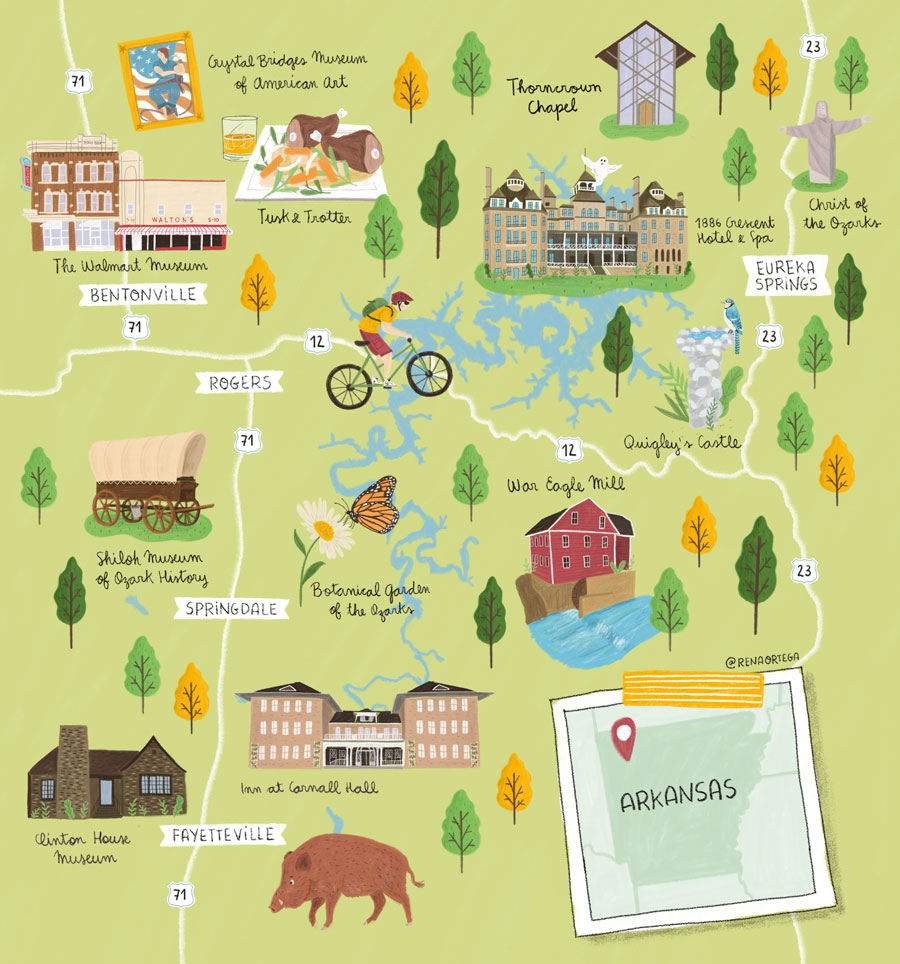 Travelers to the northwest corner of Arkansas will experience all the natural splendor—limestone cliffs, pristine lakes, deep forests—one would expect on a journey through the enchanting Ozarks. But surprises await in three locations: a bustling small town that was once home to one of America’s most influential couples; a postcard-worthy city with a national culinary and artistic reputation; and a historic vacation destination renowned for its Victorian cliffside homes and stone buildings.

Home to the University of Arkansas, this bustling city is the center of arts and entertainment in the area, especially around Dickson Street. The region is also a favorite destination for two-wheeler enthusiasts of all persuasions; it is a starting point for the Razorback Regional Greenway, the longest trail system in the state. An excellent visitor center in the town square has brochures for a range of interests, from beer to hiking, as well as local art and produce.

TO SEE
Clinton House Museum | This unassuming Tudor Revival bungalow just steps from campus looms large in American political history. Bill Clinton bought the one-bedroom house in June 1975, and later that year he and Hillary Rodham were married in the living room. Today, exhibits tell the story of the couple’s early years and their burgeoning political life. Highlights include a reproduction of Hillary’s wedding dress and a garden containing every First Lady’s favorite flower.

TO SEE
Botanical Garden of the Ozarks | A collection of 12 themed gardens surrounding a large lawn, this enchanting attraction is easily accessible on foot. In addition to the dozen or so pocket gardens—among them rock and water, vegetable and herb, shade, and Japanese—visitors will discover a chattering chicken coop, a sculptural bat roost, and the state’s only butterfly house.

DRIVE – 28 miles
Say goodbye to the college verve of Fayetteville and travel north along US-71B to Bentonville, stopping along the way to stroll the streets of downtown Springdale. Check out the murals, grab a taco at Don Gueroand visit the Shiloh Museum of the Ozarks for a complete immersion in the history and culture of the region. (Visitors will also learn that the Ozarks are not mountains, but a series of plateaus carved out by erosion.)

There’s no escaping the irony: while Walmart may have had a hand in the demise of dozens of America’s downtowns, the company’s own hometown square stands triumphant, even resplendent. Couples walk their dogs on the well-maintained sidewalks, children play in the shaded square, neighbors catch up over an ice cream. Visitors come to take a look at this living embodiment of small town America. They also come to view works at one of the country’s leading art institutions and dine at a host of acclaimed restaurants.

TO SEE
Walmart Museum | The five-penny Sam Walton opened in the town square in 1950 now houses a museum showcasing the history of the world’s second largest retailer. See the exhibit of famous throwbacks, including a “possessed” hand mixer and outdoor thermometer that “never had a good time,” plus Walton’s desk, reassembled to look like he died in 1992. Head to the museum’s Spark Cafe soda fountain for a 99-cent scoop of ice cream.

TO SEE
Crystal Bridges Museum of American Art | Founded by Alice, the daughter of Walmart founder Sam Walton, and designed by renowned architect Moshe Safdie, this magnificent museum takes visitors on a journey through five centuries of works by American masters, including John James Audubon, Georgia O’ Keeffe and Andy Warhol, free. Plan lunch at the museum’s restaurant, Eleven, which seems to soar above the spring-fed pools. Go for the traditional pinto beans with cornbread or the fried bologna panini.

Favorite choice | Stop at by Vanzant walked roadside in Lowell to sample the heirloom Arkansas Black, a tart, crunchy apple famous for its burgundy to ebony red hue.

EAT DRINK
Defense and trotter | For a decade, this bustling gastropub just off the square has been serving upscale regional dishes made with Arkansas ingredients. Start with a pint of Homewrecker IPA from Bentonville Brewing and an order of black garlic and truffle pork rinds. For the main event, go for the Bone-In Pork Chop on Chilli Cheese Purple Rice or the Buttermilk Chicken Breast with Too Easy Egg, Carrot Cake Waffle and Sorghum Syrup.

DRIVE – 46 miles
From Bentonville, head into the forests surrounding 28,000-acre Beaver Lake on winding Scenic Highway 12, a favorite with motorcyclists. Take a short detour War Eagle Mill, the only working grain mill in the state and one of the most popular breakfast and lunch restaurants in the Ozarks. Continue to Eureka Springs along Arkansas Highway 23, stopping at = a few kilometers from the city. Dubbed the “strange home in the Ozarks,” the dream home of nature enthusiast Elise Quigley (1910-1984) features her extraordinary collections of fossils, arrowheads, seashells, rocks and even butterflies.

SAVE THIS DATE
Proof that Bentonville doesn’t take its culinary scene too seriously: September 25th, the tenth edition World champion squirrel cookoff welcomes imaginative cooks and adventurous eaters for a celebration of dishes, from gumbo to sausage, featuring ‘tree bacon’.

In the 1880s, word spread of healing waters flowing from some 60 springs in the area. This is how a humble village was transformed into a booming seaside resort and baptized Eureka (Greek expression meaning “I found it!”). Today, visitors flock to the relatively isolated mountain town to admire the historic buildings – colorful Victorian homes, hotels and shops built from local limestone – anchored on the hills and rising from the hollows. Outdoor adventures abound, from fishing and hiking to mountain biking.

TO STAY
1886 Croissant Hotel & Spa | Considered the most haunted hotel in America (with 16 named ghosts), this property began in 1886 as one of the most luxurious resorts in the country, followed by stints as a women’s college and a hospital. Guests at this quirky 72-room hotel can sign up for the popular ghost tour (be sure to book early), as well as ax throwing, target shooting, and lawn games.

TO SEE
Chapel of the Crown of Thorns | This little chapel in the woods is arguably Arkansas’ most famous piece of architecture, having won numerous awards and appearing on the American Institute of Architects’ list of the best buildings of the 20th century. Constructed almost entirely of indigenous materials, the light-filled prism features 425 windows and over 6,000 square feet of glass. It is open daily and hosts two services on Sunday mornings.

TO SEE
Christ of the Ozarks | Erected in 1966, this seven-story statue of Jesus is the second tallest in the world (second only to Christ the Redeemer in Rio de Janeiro). It is a place of pilgrimage as well as the site of one of the most popular passions in the world. more than 8 million people have visited it since 1968.

PARK IT
Upon arriving in Eureka Springs, ditch your car in favor of the city’s streetcar system and leave navigating the notoriously narrow and winding streets to the experts.

This article originally appeared in the Fall/Winter 2021 issue of Southbound.

Wings Over the Prairie takes off in Stuttgart