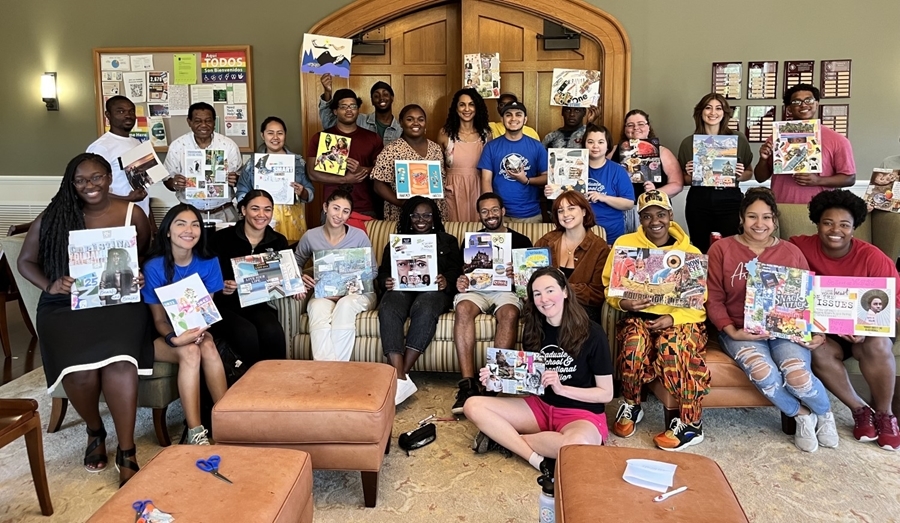 Participants in this year’s cohort of the Razorgrad Institute for Success and Engagement.

When DeJuan Gilchrist arrived on campus at the U of A this month to begin his master’s degree in drawing, he found himself a stranger in a foreign land. Originally from Atlanta, Gilchrist didn’t know anyone from Arkansas before deciding to study here — and not only that, but predictably he was nervous about the transition to graduate school.

But Gilchrist is already finding a sense of belonging and community at the U of A through the Razorgrad Institute for Success and Engagement (RISE), a program committed to developing an inclusive environment that encourages student success by investing in new students. promising graduates from historically underrepresented groups. populations.

“I was really nervous about going to graduate school — I still am,” Gilchrist said. “But the RISE program helped ground me. I was able to connect with other first-year graduates with the same concerns and realize we were all in this together, and then talk with those who had already followed the graduation process and hear how they navigated it.”

“We are always looking for ways to increase support and community among our graduate students, and the RISE program has helped bring more bright, energetic, and potential changemakers to the University of Arkansas and help them succeed,” said Laura Moix, director of graduate students. Support. “Not only that, but it provides more synergistic effects in the form of diversifying our campus and creating a more inclusive and equitable campus community.”

Twenty-two students are participating in this year’s program, which kicked off Aug. 8 with a week of activities, including a crash course in campus resources, tours of university facilities such as the Pat Walker Health Center and university libraries, and discussions around topics such as dealing with impostor syndrome, how to be mentored, and how to find your way in a predominantly white institution.

“RISers, as they are affectionately called by our office, are involved in activities that focus on empowerment, community building and access to key resources,” Moix said. “But more importantly, they are a tight-knit community of friends, advisors, mentors and supporters at the U of A.”

And the data confirms the success of the program. On average, students attending RISE have a 93% retention rate, compared to 83% of the university’s white graduate student population and 76% of all underrepresented minorities.

For Christina Barnes, originally from Virginia, member of the 2019 cohort who is pursuing her doctorate. in experimental psychology, the programming provided a unique window into the campus – and into itself.

“There are a lot of on-campus responsibilities and shared opportunities that I’ve had the opportunity to participate in, and RISE is by far the most impactful and meaningful,” she said. “I really feel like I wouldn’t have had the success I had in graduate school if I hadn’t had those transformative experiences in RISE. It goes deeper than some other graduate programs. integration. It’s more than, ‘Let us show you around and introduce you to things. RISE helps you learn skills you never thought you needed otherwise.’

Most importantly, the program emphasizes personal growth and marketing to students. Students participate in guided meditations, a values ​​exercise, and a discussion on empowerment. Sarah Goforth, Executive Director of the Office of Entrepreneurship and Innovation, also works with each student in the cohort to develop a personal two-minute pitch, which they develop throughout the week and deliver to university administrators and to others at the program reception dinner.

“For many of them, this is their first time to stand in front of an audience and communicate who they are, why they are here and what they need,” Goforth said. “I work with students to make the most of this opportunity by telling their story in a compelling way, then asking them, authentically, for the help they need – for some it’s internship links , for others it’s mentorship, and for others it’s a role of graduate assistant or helping them find resources to fund their research.We make a lot of connections for students after the meeting because they asked for help.

Goforth first became interested in the program as an opportunity to recruit for the Graduate Certificate in Entrepreneurship, but she quickly realized the impact of her participation in the program.

“This is no longer a recruiting opportunity for me,” she said. “I believe deeply in the RISE program for the value it provides to students. It is short in duration but has a long impact. It is one of the most transformative experiences for graduate students that exists on our campus.”

For Barnes, creating her own personal story in the form of an elevator pitch was one of the program’s most valuable experiences — and a skill she took with her through college.

“At first I was like, ‘I don’t want to do this, what’s the point?’ But it’s absolutely a skill that I use all the time, and it’s been so beneficial in pushing me forward,” she said. “You don’t realize it until it’s already over, but I can see how all the things we do throughout the week build to help us tell our story, and that story is ultimately which will help us pursue productive and worthwhile careers.”

When Barnes graduated from the program, she knew “right away” that she wanted to serve as a mentor in the program for the next year’s cohort.

“I just felt like RISE had so much impact, and I love talking to people and getting to know them, so I thought I’d be happy to share my knowledge,” she said. . “Being in RISE has helped me get an assistant position and helped me meet people who have become close and valued friends, and every year that I’m in the program as a mentor, I can help guiding people to those same experiences – to finding impactful mentors or long-lasting friendships. It’s so valuable, because if I had come a year or two earlier, RISE might not have existed. . And I don’t know if I could have made the most of my experience if that hadn’t been how I started things.”

Five years later, Moix sees the impact of the program not only in the students’ successes, but also in the connections they have made with each other.